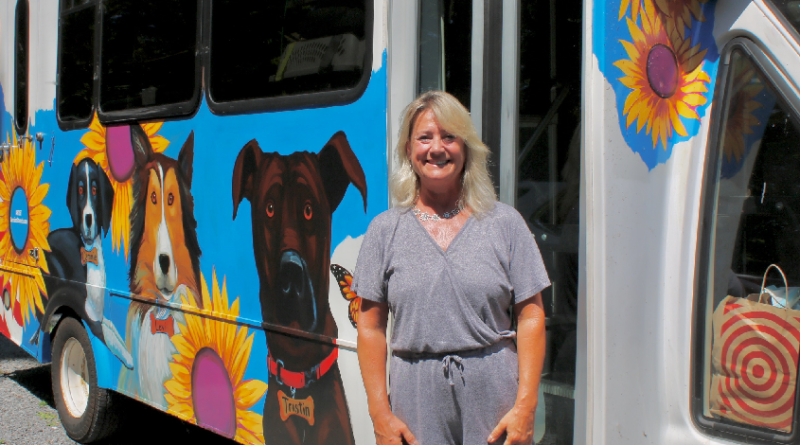 An underground railway for dogs is alive and well, thanks to a Finger Lakes woman

Christina Lambert sees it all too vividly. One day a dog is a beloved member of the family. The next day, the family is dropping off — surrendering — the dog at a facility. They hope, perhaps, some lucky new family will rescue the dog.

“People don’t understand that dogs that have been surrendered by their owners are usually euthanized first,” Lambert said, her voice pained. “Surrender dogs, nobody is looking for them. They’re scared. Their world has changed drastically.”

And they don’t know they’re about to cross the rainbow bridge in a hurry.

But if the dogs are lucky, Casey to the Rescue swoops in to save them.

Lambert, 58, of Ovid, heads a team of dog rescuers. Her organization, Casey to the Rescue, is named after Marine Corporal Casey Owen, a wounded warrior who inspired Lambert after getting seriously wounded in a rescue mission for which he volunteered.

She has literally grabbed dogs just minutes before meeting their maker, driving them safely to a receiving shelter and helping them — not unlike an underground railroad — to find a new family in Pennsylvania, New York, New England and Canada.

About every two weeks, Lambert and a co-pilot (Carmel O’Kane or Sue Jackson) start their journey from the del Lago Resort & Casino parking lot on a Friday morning, a trip that will end in Lexington, Kentucky, 10 hours later. The next day at 7 a.m., cars arrive with dogs that will be put on the Casey shuttle — 40, 50 or more of them; along with some cats.

By 9 a.m., the trip back to Rochester begins with stops in Erie, Pennsylvania, Buffalo and Syracuse. At each stop, drivers from other dog rescue agencies are prepared to take the dogs to their shelters, to foster homes or to a forever home.

In less than a day’s time, a lot of dogs have a whole new horizon in front of them, courtesy of Casey to the Rescue.

At the trip’s start is Shelly Phillips Wright in Lexington, Casey’s coordinator.

“She rounds up the dogs to be saved,” Lambert explained. “Rose Ann Geller White in Syracuse finds receiving shelters for the dogs, which is a huge task, non-stop.”

It’s all computerized. When Lambert gets in her 2016 Ford Econoline shuttle bus, adorned on the outside by portraits of the pups she’s brought north, she knows pretty much how many dogs and cats she’s going to pick up, what breeds are represented and where there’s a shelter or home waiting for each dog. It’s a canine block chain.

Helping out when the dogs are being loaded in Kentucky is expert dog handler Lydia Graves, who may trail Lambert north to Erie with a load of puppies who can’t be placed on the shuttle.

Every dog making the trip is loaded into a crate and many have new collars before getting on the shuttle.

“The dogs are all nervous,” Lambert said. “It’s rare to have a happy dog just walk into the shuttle. I did have one that was just surrendered by a family — the kindest, sweetest dog, hopped right into the crate. Sometimes we have to pick them up, coax them. Lydia is a champ and so is Carmel. The dogs that are super scared; it takes all three of us to get them calm. We’re not dumb about it: every dog is capable of biting you, but I’ve never gotten bitten on transport.

“Cats are usually quiet until about the end of the trip, when they’re getting hungry. We don’t open their crates. There’s a litter box in there. They don’t make any noise.”

The dogs bark as they’re getting loaded in the morning. And they keep barking for about 10-15 minutes, then they realize they’re on a trip and settle down. Many enjoy staring out the windows of the shuttle.

On the road, gas stations are an experience. The dogs start barking as the shuttle slows. That draws interested onlookers and spectators who see the big dogs painted on the side of the shuttle and hear what’s going on inside. Lambert and her co-pilot explain the dogs are being rescued.

“I pulled into a gas station along the way with 70 animals barking and I had people walking up and handing me $20 in cash,” she said.

Casey to the Rescue exists entirely on donations.

Lambert got going with a grant and donations from friends and customers. She needed $31,000 to buy the shuttle, a former church bus and cover expenses, including $700 in gas for each trip.

“We’re strictly run by donation,” she said. “We’re not paid by anybody. A lot of my donations come in from my fantasy football customers. I have a link on my website (CaseyToTheRescue. com) for donations (or CTTRescue@ gmail.com and Paypal). A lot of my friends know my passions and have written me a couple of checks.”

“I work for the Fantasy Football Players Championship (FFPC),” she explained. “I’m customer service. We’re a large, season-long fantasy football company. We host events in Las Vegas. We’re only football. That keeps us busy enough. We have a niche market. We have a season-long, very loyal customer base which is a key reason for our donations. My customers have caught on to my passion. One just literally called for my address and told me, ‘I’m sending you a check.’ About a dozen have sent me donations, just by word of mouth.”

After graduating from SUNY Cortland, Lambert worked side[1]by-side with her mom and dad at their Gehring Pump Co. She started working for DraftSharks.com, another fantasy football organization in 2003 and joined FFPC in 2008.

“A friend of mine had come across an ad on the internet that they were looking for help. I rode with her one day and we picked up just one dog and I thought, ‘Well, this is kind of neat.’ I put in my name for a volunteer and started driving 10 dogs in my car, from Buffalo to Rochester, then Buffalo to Syracuse, then from Erie to Syracuse every two weeks.”

She tells the story about the origin of Casey to the Rescue: “An elderly man owned an old limo bus and out of the kindness of his own heart, he would put his own gas money in the tank and drive the shuttle bus. Two years ago, that shuttle bus caught on fire, so we had nothing. He was driving from Kentucky to Erie and then straight back in one day with dogs. We would all meet him with 10 cars in Erie and pick up the dogs.

“With no shuttle,” she continued, “we were not going to be able to save these dogs anymore. We were piecemealing it together with renting a truck or begging a truck here and there and I finally said, ‘This isn’t going to work. Now hundreds of dogs are going to die.’”

East Coast Paws had been set up to rescue dogs out of Kentucky and now its mission was dissolving, she added.

Friend JoAnn Campbell helped with the legal work on the 501(c)(3) and with fundraising.

“We did a basket auction that raised a couple thousand dollars. I received a woman-owned business grant. Tim Lambert “is always hitting up his golf buddies for donations,” she said.

She bought the shuttle in January.

“When you purchase a shuttle in January and they tell you the air conditioning works, don’t believe it,” she said.

There are mysteries to dog adoption.

“Some people just adopt dogs from a photo. Everybody asks me, ‘I’m looking for this type of dog.’ I have a link on my website that has the receiving rescues on there. If you live in, say, Syracuse, there are Syracuse rescues listed there. Pictures of the dogs scheduled for the trip are sent to the various rescues. You have people looking for, say, a dachshund. Rose Ann will ask Shelly in Kentucky if there are any dachshunds that have been surrendered. And if Shelly has one, send ‘him up.

“It’s really neat to hand over a dog to somebody who’s adopting it right then and there. Then we’re all crying. It’s kind of rare, but it happens. They’ve done all their paperwork with the rescue, they’ve been cleared to adopt the dog and they come and meet the dog right there at the shuttle in a parking lot.”

Lambert is clear that all the dogs have been medically cleared and all have paperwork, even those going to Canada, where the transfer is handled by experienced drivers.

“The people you meet that are involved in this are some of the strongest, kindest people,” she said. “We all have the same passion, to save dogs, to try to fix the problem that people have made. We owe it to these dogs. We created this problem.”