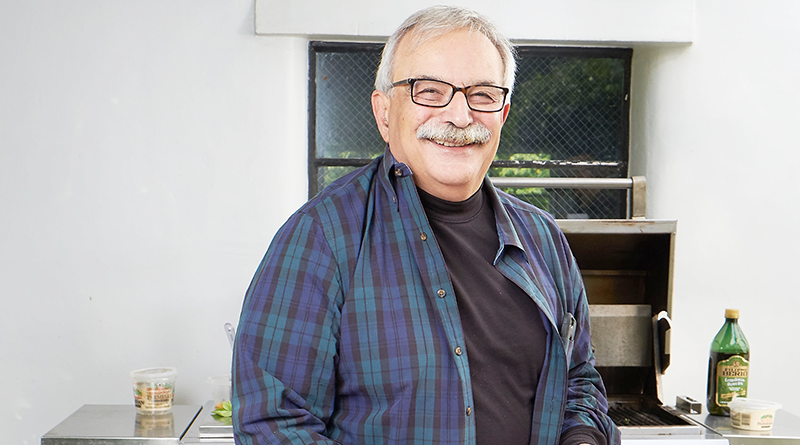 Rochester physician, a pioneer in the battle against HIV/AIDS, shares in a new book his fight to treat AIDS patients in the early days

At 7 years of age, Bill Valenti received his first recognition as a pioneer, along with hundreds of other children who received lapel buttons that read, “Polio Pioneers.”

Decades later, as a physician, Valenti did indeed become a medical pioneer leading the nation in the understanding, treatment and prevention of acquired immune deficiency syndrome — or AIDS.

Unlike many youngsters, Valenti knew what he wanted to be from an early age. His view of the iron lung at Sibley’s during a March of Dimes campaign made a lasting impression.

The success of the Salk vaccine against poliomyelitis led him to believe that a terrible disease can be wiped out. In high school, he interviewed his great uncle, James Chiappetta, a physician who practiced in the public market area of Rochester. When Valenti asked his uncle what it took to be a good doctor, he replied, “A genuine love of humanity.”

In the course of his career, Valenti has shown great compassion to patients — many of them turned away from other doctors.

In 1981, the Centers for Disease Control and Prevention published a report on five cases of pneumocystis in Los Angeles and New York City. As an epidemiologist, Valenti focused on infectious disease and at that time, the medical community thought AIDS was not in Rochester.

However, in 1986, Rochester had 101 new cases of AIDS and Strong Memorial Hospital was treating 200 patients. The epidemic in Rochester was growing and there were more questions than answers.

While continuing to treat patients, Valenti had to don two more hats: educator and fundraiser. His friends Dan Meyers and Jerry Algozer teamed up for the first major fundraiser, “Helping People with AIDS” in March of 1986. This event, which has morphed over the past 17 years, has raised more than $1 million for local patient care. Federal funding was not available until the early 1990s.

Valenti says he and his colleagues will never forget the emotions associated with AIDS over the decades. Patients died; families abandoned gay relatives; homophobia and the fear of contagion were pronounced; and the community was afraid. As a physician, Valenti knew this was a battle and acknowledges that he wore army fatigues around the house to remind him that this was a battle, a medical war. Part of the battle would be fought in the media and Valenti found himself in the front of the camera and microphone frequently. “Learning what to say and how to say it, and what not to say to a reporter is not one of the things that they teach us in medical school,” he said.

“I was fortunate at the time to work with Dr. Steven Scheibel, a gifted ‘lab jockey.’ We were medical warriors together for a decade along with a team of compassionate and talented medical colleagues. Rochester should be very proud of its medical community and their long-term view of this disease and their professional and financial commitment to eliminate this disease,” Valenti said.

“This made us legitimate and we no longer had to run underground clinics on Friday nights in order to treat patients. By the late ‘80s, we realized that not every AIDS patient was a gay male or intravenous drug user. There were women who had heterosexually transmitted HIV [human immunodeficiency virus infection],” he said. “The face of the person with AIDS was changing and it was becoming more difficult for people to think of ‘them and us’.”

John Urban, president and CEO of Greater Rochester Health Foundation, says of Valenti, “Over the years, Bill has been eloquent, precise and persuasive in his call to action for the medical community to provide care for people who are HIV positive. When many medical professionals refused to treat these patients, Valenti stood almost alone in his care for them. I am not sure if people truly recognize the influence he has had on medicine on this community. To this day, he continues to advocate for funding from grantors to provide funding for programs that support the health of the LGBTQ community. He is not only a gifted physician, but has shown incredible courage over the decades.”

Maverick in his Field

Valenti has taken many risks in his career, including going against the prevailing advocacy position that HIV testing indicated only past exposure to the virus and would lead to discrimination and stigma for those who were tested.

When the science of HIV testing told us that a positive test meant that people had HIV in their blood and that they could transmit virus to others, he went public in support of the test. This was an unpopular opinion at the time, but he thought it was necessary to speak to the importance of the test.

Ultimately, he reconciled the science with the advocacy position that eventually linked test results to medical care and help forge the legislation in New York state that protected test results from disclosure — before the Health Insurance Portability and Accountability Act (HIPAA), a law enacted in 1996 that provides data privacy and security provisions for safeguarding medical information.

“More than 500 of my medical colleagues wrote to me to let me know I was wrong,” Valenti said. “My mistake was not in the theory of the test but in making it clear that I was advocating for voluntary testing and not mandatory testing. There have been many humbling moments in my career.”

In 1989, Community Health Network had permanent space for its clinic at 758 South Ave. in Rochester and was swamped with patients (the clinic is now located at 259 Monroe Ave.) A year later, the patient population had grown from 75 to 450. The clinic treated people based on their ability to pay, which made staying open challenging. After the film “Philadelphia” was released in 1994, the number of people in Rochester believed to be HIV positive was estimated to be in the thousands. “There was also good news that year,” Valenti said. “Some combination of drugs was working and being HIV positive was not necessarily a death sentence.”

According to Valenti, there have been many more breakthroughs over the past three decad­es. Blindness from cytomegalovirus infection has been curtailed. Couples in which one person is HIV positive and the other negative understand how to conceive children who are born HIV negative. Kaposi’s sarcoma, which created disfiguring purple spots on a person’s body, has virtually disappeared. One pill a day, pre-exposure prophylaxis, or PrEP, greatly reduces the risk of HIV infection in high-risk people. AIDS is no longer a fatal illness, but a chronic disease for many.

“I cannot begin to express the number of amazing people with whom I have worked over the past three decades in terms of patients and their families and colleagues. I have experienced every conceivable emotion from discouragement, to elation, from fear to optimism,” Valenti said.

“We worked long hours. When you believe in something as strongly as we did, it can be exhausting but it never has felt more like a mission than a job. I have cultivated a life for myself outside of work. I love to travel and have been around the world twice. I also like to relax with friends and family, listen to music, garden and spend time with my partner of 19 years,” he said.

At the prodding of many colleagues, Valenti has chronicled this journey in his recently published book, “AIDS — A Matter of Urgency.” When asked if he could use individual names in this book, not surprisingly, there was a resounding “yes.”

“We can end AIDS,” says Valenti with his characteristic optimism. “We are almost there.”

All book proceeds go to Trillium Health’s Fund to End the HIV Epidemic by 2020. For book information, visit www.drbillvalenti.com.

His work: “He built the organization on the foundation of courage, hope innovation”

Impressive attribute: “His commitment to caring and treating those impacted by HIV/AIDS has not waivered for more than three decades

His uniqueness: “He stepped out in the community to bring hope and care to all those who had none at a time when HIV/AIDS was misunderstood, and the fear associated with it prevented access to quality care for so many

How he motivates people: “Bill continues to remind us of how very far we’ve come, and continues to lead the fight for an AIDS-free generation

Personality: “Bill has a mischievous laugh that is absolutely contagious, can command a room at any moment, and lights up in the presence of our babies and our children.

Working relationship: “There is an uncanny connectedness between us…he reminds me of our history, and trusts me to lead us into our future with a momentary glance where we both know what the other is thinking

Name: William Valenti, M.D.
Age: 72
Hometown: Rochester
Education: Medical College of Wisconsin, MD; SUNY Buffalo, bachelor’s degree in biology and biological sciences
Influential person in his life: His great-uncle, physician James Chiapetta of Rochester
Languages: English, French and Spanish
Current positions: Senior vice-president strategic advancement, chief of innovation and staff physician at Trillium Health, Rochester; clinical associate professor of medicine, University of Rochester School of Medicine
Previous position: Hospital epidemiologist, University of Rochester Medical Center
Hobbies: Gardening, international travel and photography
Lifelong ambition: to be a physician and end AIDS, based on a childhood experience of participating in the Salk polio vaccine trials and watching the eradication of polio after the vaccine went into widespread use.
Something most people don’t know about him: “I collect bowling balls and use them as garden art. Over the years, friends have given me some very colorful gifts that liven up the yard and make great conversation pieces. Also, I do a lot of digital photography and make photo books for people as holiday gifts.”