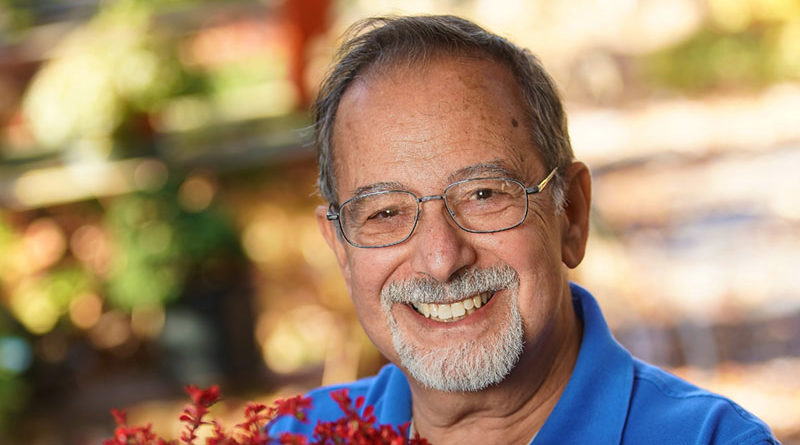 Henrietta’s Bill Valavanis: This activity can grow on you

Time and love. Spend 90 seconds with a bonsai, and you know it’s gotten a lot of love over a long period of time. Careful love. Introspective love.

A bonsai, literally a plant in a tray or pot, is a living thing, always changing, always trying to grow. Through pruning, root cutting, grafting and training with wire, the plant becomes something alive that has conformed to your wishes and actions.

Seasons and years pass, and the bonsai needs to be handled, manicured, watered and appreciated.

“Taking care of a bonsai is more than taking care of a pet,” says Bill Valavanis, 68, of Henrietta, an internationally recognized expert in all things bonsai and penjing, its Chinese counterpart.

From his Henrietta International Bonsai Arboretum, Valavanis extends his knowledge, expertise and passion all over the world. In November, he led a tour group of bonsai aficionados to Japan, a trip he takes twice a year. His flock viewed private and museum gardens and saw special bonsai exhibits in Tokyo, Kyoto and Omiya.

He picked up interest in bonsai when he was 11, and by age 15, was giving his first lectures and workshops. Two years after moving to the Rochester area, he took his first bonsai studies with masters of the art in Japan. Then came degrees in ornamental horticulture from SUNY Farmingdale and Cornell University, and in 1972, a master’s teaching certificate in Ikebana (Japanese flower arrangement) at the Shofu School in Japan.

Young Bill Valavanis then went three directions at once, infused with a spirit to share bonsai in as many ways as he could, respecting the 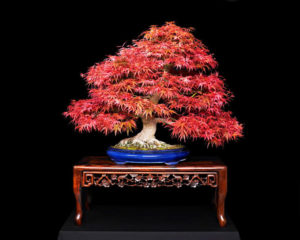 discipline and strictures of a Japanese art form, but adding a helpful, enthusiastic and you-can-do-this-too American approach to the art.

First, he published the first two volumes of the Encyclopedia of Classical Bonsai Art. Then he started a periodical, International Bonsai magazine. He also edited the Bonsai Bulletin. He has a blog at valavanisbonsaiblog.com.

Second, he opened up a business of providing pre-bonsai plants, containers, tools and even ready-to-enjoy bonsai trees. The business, The International Bonsai Arboretum, is behind his home in Henrietta.

Third, he taught at workshops behind his house. Then he quickly expanded to lead classes in Canada, South America, Europe, Australia, Indonesia, China, the Philippines, and Taiwan. He began offering guided tours to bonsai exhibitions all over the world. He judged, exhibited, lectured and held workshops in conventions all over North America and beyond. And in the process, he was the first American asked to judge a bonsai competition in Japan. 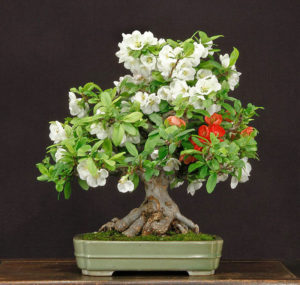 He gathered enough frequent flyer miles to take a free trip to Mars.

And yet, every day is a new experience for Valavanis.

“I’ve been studying bonsai for over 57 years,” he said.

He said bonsai is a “very quiet art, very subtle.” Your bonsai is something you check every day, making sure it’s watered, taking care of weeds and invasives, and watching the many finite changes it goes through. “It’s not always the destination that’s important,” he said. “Getting there is the pleasure.”

Valavanis leads a full schedule of introductory bonsai classes three days a week when he’s not globetrotting, showing students how to deal with different kinds of trees.

For his students, patience helps. Attention to detail helps. Some knowledge of plants helps. 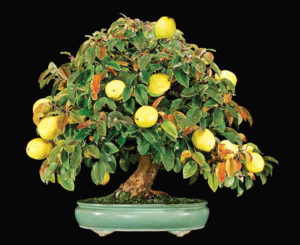 It’s easier to train an architect or an artist in bonsai,” he said, “because they have developed their sense of creativity.” Gardeners have to put aside some of their instincts to do well with bonsais. “They’re too concerned about keeping things alive,” he said. “Again, it’s not always the destination that’s important; getting there is the pleasure.”

Getting there takes some doing. You need a plant stock — a pre-bonsai sapling, for instance — and tools. Valavanis will sell you a basic pre-bonsai plant like a Japanese larch or buttercup winterhazel, for $30. You could also spend three times that for a Chinese quince or Japanese black pine.

The pottery containers on the most beautiful bonsai are another art form and can sell for thousands of dollars, especially those made by Japanese artisans many decades ago.

And then there are the rocks — the suiseki. Valavanis leads a rock-hunting trip to Naples, New York, every year and has done the same in Puerto Rico. He looks for rocks that complement the bonsai. Many suiseki are lava stones with bubbles and crevices born of fire and water. Two bonsai lovers can see interest in the same rock, with different perspectives, different outcomes and different stories that can be told.

Because bonsai is to be appreciated as a visual display, the suiseki are important. And they underline the subtlety, introspection and reflection of the total art form.

Valavanis likes to tell the story of finding a particularly interesting suiseki and, with some friends — and one would suspect, a nice wine — wetting the stone thoroughly just to watch it dry off, the shape of the water changing and the colors of the stone varying as the water evaporates. 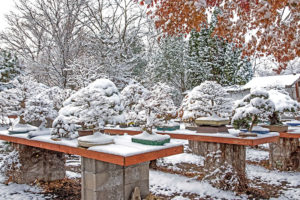 In fact, he has wooden racks full of suiseki-to-be in his arboretum.

Exposed to the outside, to wind and sun and rain, those rocks can change and become more interesting. Walking through his forest of bonsai in his arboretum, discussing the change process, he picked one rock out of the rack and took it back to his workshop. It had aged enough. 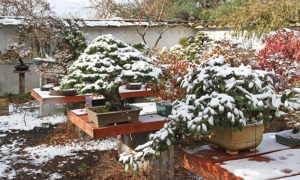 Diane, his wife of 33 years, is a valued critic, with an eye to discern from a different perspective. The Valavanises have two sons — Christopher, a landscaper, and Nicholas, who graduated from SUNY Maritime as a top cadet and went to work the day after graduation in the oil industry in the Gulf of Mexico — for $160,000 a year, starting salary.

Valavanis doesn’t see it in the cards for his sons to follow him into a life of bonsai. “No,” he said. “It’s too hard. You can’t make money in it. I told them, ‘Go out and get a good job with more money. Be happy. You really need a passion for bonsai.’”

Thankfully, class after class, he sees that passion. The plants link him to students. Through him, those students and their bonsai grow.

He also has student-clients, for instance, who don’t take their bonsai home — they leave them in Valavanis’ care, because they know he will watch them.

His books and magazines are also works of art.

The photography is expensive and exquisite because it’s so hard to capture the real quality of a bonsai — its soul and inspiration, without professional photographic care.

And his publications carry several weights — the photos give bonsai growers ideas on what’s possible and goals for their own projects; accompanying the photos are text with how-to information and descriptions that someone can read over and reflect on; and underneath it all is Valavanis’ love and respect for the art form, his enthusiasm for teaching people everything he can, and his passion for making you feel that you may not be a master, but you can master bonsai.

Give it a shot

Spend 10 minutes with him and you’re a friend and he’ll tell you anything you need to know. Spend an hour and get inspired. Spend a class cycle with him and become an advocate. 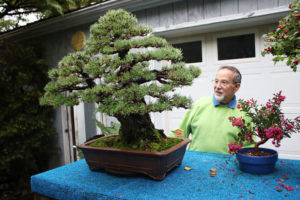 Clearly, Bonsai is not for everyone.

One of Valavanis’ students drives from central Pennsylvania every Friday night for workshop with the master. His wife stays in the car the whole time.

For bonsai is a discipline as well as an art, a calling that not all can hear, a pleasure that requires an unusual focus. But the product, especially with Valavanis’ tutelage in person or through his many writings, is stunning.

Valavanis has an enormous reach.

His work with the National Bonsai Museum at the National Arboretum in Washington made the museum the most visited area in the arboretum.

The collection there includes a 358-year-old bonsai that survived the bombing of Hiroshima in 1945, and plants donated by foreign leaders.

He has curated exhibits for many years. He has overseen collections. He has transported students and friends. He has lectured.

“It is a challenge and delight to make a tree that looks good,” he said. “Buy a tree and try to keep it alive if it interests you. Try your hand at making a bonsai yourself. Some view bonsai as a craft; no, it is an ultimate art. It is always changing. When you do a sculpture, it’s done. Or a painting: when it’s finished, it’s done. But a bonsai is always living, always changing.”

Valavanis is driven to enjoy and help others enjoy bonsai. Through prostate cancer, carpal tunnel surgery, feet broken eight times, two new knees and a trigger finger, he prevails. He has people who are devoted to helping him continue, particularly a crew of helpers that shows up each week to help him set up and take care of the bonsai in his arboretum.

All of that makes Bill Valavanis enormously happy and fulfilled.