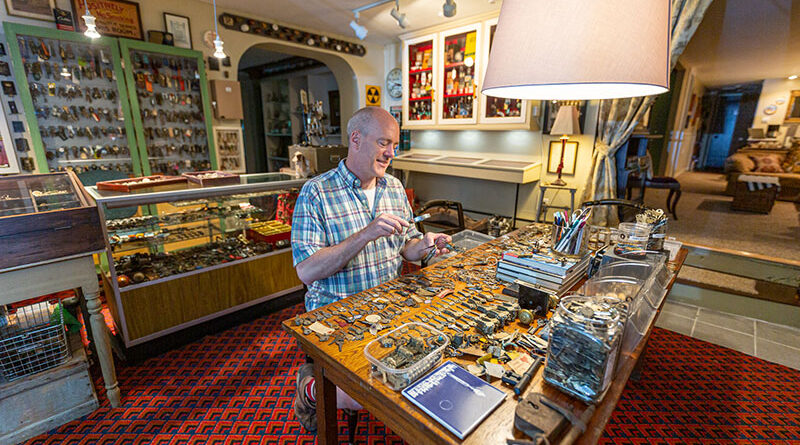 Keys can unlock memories as well as locks 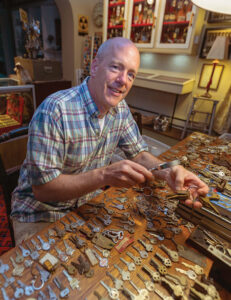 Even as a young child, Ethan Fogg knew that simple household keys held a certain kind of magic.

That’s why at age 7 he became the self-appointed night watchman in his family home.

“I would go through in the evening and lock up all the antique furniture, take out all the keys and put them ‘someplace safe,’” said Fogg. “My parents would get up in the morning and couldn’t get dressed.”

It didn’t take long for George and Joan Fogg to decide that giving their youngest son his own private set of keys would serve everyone well. They also believed that collecting was a great way for children to learn discernment and responsibility.

For the lucky few who’ve been inside the key museum over the years, the response is unanimous: Fogg’s collection is a jaw-dropper.

“People are amazed by the sheer volume,” said the life-long Finger Lakes resident. “And the sparkle. It’s a lot of shapes and finishes, like a jewelry store.”

“It allows me to maintain the integrity of an original family of keys,” he said. “The complexity, contrast and story are so rich within any given box.”

‘Keys are talismans. They get us in touch with other places and other things.’ 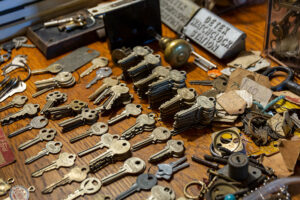 Fogg’s love for the design and function of each artifact is eclipsed only by his passion for learning its unique story.

“Keys are talismans,” he said. “They get us in touch with other places and other things. Some keys may have tags on them — something as literal as a hotel key, or a little handwritten tag that says ‘Mabel’s cottage,’ or a key ring from so-and-so’s Esso gas station.”

Often there are clues that help place a key in time or location, Fogg said.

“There was a period in the early to late 1950s when a lot of advertising keys were in circulation,” he said. “A lot of the gas stations like Mobil, Exxon and Esso would sell keys with their logo in their service stations so you could show your affinity for their brand. Those have become highly collectable and are often in full color or enameled.”

Car keys might also have a tag or a key case with the name of the dealership.

“I always enjoy the ones whose phone numbers are truncated, like ‘Edison-4-2461,’ or even better, ‘dial 3143,’” said Fogg. “They just really remind you of a time when life was simpler.”

Beyond the storytelling element of key collecting, there’s also a strong sentimental dimension.

“I continue to be surprised, as a collector and an observer, at the number of people who have sentimental caches of keys,” said Fogg. 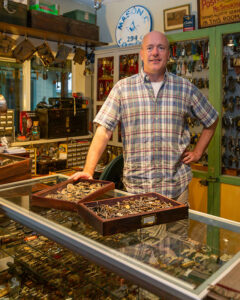 Fogg’s private collection of cut keys and blanks, locks, door knobs, mechanisms, printed memorabilia and vintage packaging offers an eyeful, to be sure.

But are any of his pieces rare? Are they priceless?

Fogg prefers to call his finds “odd and wonderful.”

“I have a key to one of the earliest county jails in the Finger Lakes that came to me from a retired sheriff literally almost 50 years ago,” said Fogg with pride. “It was probably my first or second year of collecting — I don’t think I was even 10 years old. It’s a handsome key and I have every reason to believe between the aesthetic and the provenance, it’s [authentic].”

Years later, in a little antique shop that was going out of business, Fogg discovered and purchased another county jail lock and key with what he called “appropriate wear and paper ID tag.”

“To think of the number of lives that have been involved on both sides of that lock…,” he said.

And Fogg won’t likely ever own an Astin Martin or a string of Rolls Royces from the 1950s. He won’t own a slew of cornerstone historic residential and commercial structures. But, he owns their keys.

“They’re touchstones to the cars and buildings and the experiences and times in history that would otherwise be out of reach,” he said. “They existed then, they served a purpose then, and although their purpose is different now, no one can take that away.

“That’s why I prefer cut keys over uncut keys and why I like patina and wear, and why I respect a fistful of keys that have been on one ring together for a long period,” he said. “I am loath to break them apart — it’s like breaking up a family. They belong together.”

“What I’m always thinking about when I find these wonderful keys is that someone may have spent a year’s earnings or a heck of a lot more than that on a beautiful home or expensive automobile. But those things are worthless without the keys,” said Fogg.

“Whereas I can buy a key to that 1963 Lincoln with suicide doors and a convertible top for just a dollar or two, if I search long and hard,” he added. “The car is likely long gone, but a little bit of it can live on in a carefully managed collection for generations to come. It can help get our modern generation of collectors in touch with how things used to be.”

The aesthetics are especially fascinating, to see how design elements changed over time and how certain products were infused with gender and heritage.

“Lincoln and Cadillac were always fiercely competitive about who had the most elevated product. Their keys are like jewelry,” said Fogg. “And they sold jewelry for your keys: key rings with expensive fobs or nice leather cases.”

There’s also a ceremonial element and implied privilege to possessing a key, Fogg said. When one buys a car or house, often the last step is getting the key.

Likewise, building managers and custodial staff, before modern technology, were easily identified by their oversized ring filled with keys. They were in charge of their building.

And in a prison setting, though people exist on both sides of a locked door, it’s the privileged or powerful ones on the outside who hold the keys.

As a member of several online groups of collectors, Fogg often swaps stories and information about what he’s discovered with fellow enthusiasts.

In June, he made the key connection of a lifetime and gained a respected friend.

He was the first to read a post from someone looking to downsize their collection.

“I’m getting rid of about 6,000 keys or so and I don’t want to sell them for scrap. Anyone interested?” the post read.

“My first thought was, ‘thank you for saving them from being scrapped,’” said Fogg. “Once they’re melted, you can’t get them back. The people who worked in those factories that made them, the people who carried them, the stories that follow them are gone and they can’t be retrieved.”

Two days later he was in his car, driving “10 hours round trip to buy five sweater boxes filled with roughly 6,000 keys for what some people would spend on an expensive dinner for two,” he said.

“I spent almost four hours in his museum, seeing his collection and admiring items that make me feel very humble,” said Fogg. “He has been collecting for 20 years longer than I have and has beautiful, meaningful examples of things I’ve only seen in magazines and online.”

The experience was nothing short of transformative.

“He was exceedingly generous and helpful,” Fogg said. “My collection is so much richer for the experience and it will continue to be meaningfully influenced by his insights.”

After about two hours in his new friend’s museum, Fogg learned he was probably the fourth person who had been there.

“It’s a fairly competitive sport,” said Fogg. “When you think about it, there’s not that many out there to be had, and if you know what you’re looking for odds are others are looking for it, too.”

“The more you see, the more you realize you haven’t seen anything yet,” he said. “There are little idiosyncratic elements, there are things that were done around wartime when metals were in short supply, there were designs that failed. To have examples of those short-lived, ill-fated things is an honor.

“I now have hundreds of brass keys, because I’ve been watching for them. Scrappers love brass, but so do key collectors. And these keys worked hard — they deserve to have a quality retirement.”

Fogg said curating a collection of anything “changes your world view on all sorts of dimensions.”

“It teaches you to care about and for things,” he said. “The act of collection gets you in touch with a degree of detail that normal life does not.”

A word to non-collectors

People who have drawers or old boxes full of unwanted keys have a number of options.

“First, send them to me,” Fogg said with a smile.

If there’s a profit motive at hand, sell them on Facebook Marketplace, he said. Or if profit is not as important, take them to charities that operate a retail arm like Habitat for Humanity or Salvation Army because “people like me shop in those places,” he said.

“Rather than just pitching them in the garbage, which just makes the mountain taller, offer them to your kids,” he said. “There may be some sentimental memories of ‘that hotel key from where we used to vacation at the Cape,’ or ‘the first car I ever drove.’ That talisman dimension is often bigger than we think it is.”

It should be no surprise that Fogg owns many of the keys that represent his childhood — the keys to the home he grew up in, to most of the cars that were in his family through the years.

“It’s part of the genealogy of my family — it’s part of how this collector views the passage of time,” he said.

Rest assured, starting a collection of keys doesn’t mean one has to become a collector.

“If you get to 10 and think ‘wow, those would be cute in a frame,’ you can be done,” said Fogg. “They tell a story. That’s the key to the cottage when we were kids, that’s the key to my first dorm room in college.”

Never remove tags from the keys, and don’t clean them, he said. That removes their provenance.

And above all, don’t throw them away. When they’re no longer wanted, get them to a place where they can be repurposed, where they can find a new home, because there are people who are always watching for more stories.

“Think of keys as used books,” said Fogg. “I’m looking for keys because I want to be in touch with others’ stories and I want to spend a little time in that ‘63 Lincoln, I want to ride with you in that Studebaker. I want to visit your parents’ cottage.”

Among other things, he serves as president and CEO of Canandaigua Chamber of Commerce

A lifelong New Yorker, Ethan Fogg currently serves as president and CEO of the Canandaigua Chamber of Commerce, and formerly as director of community relations and foundation at Clifton Springs Hospital and Clinic and regional director of sales and marketing at Community Media Group.

The Waterloo resident has earned a master’s degree in public administration from SUNY Brockport, a bachelor’s in industrial and labor relations from Cornell University, and associate degrees from Paul Smith’s College and Finger Lakes Community College, where his volunteer efforts earned him FLCC’s Alumni Association Exceptional Service Award.