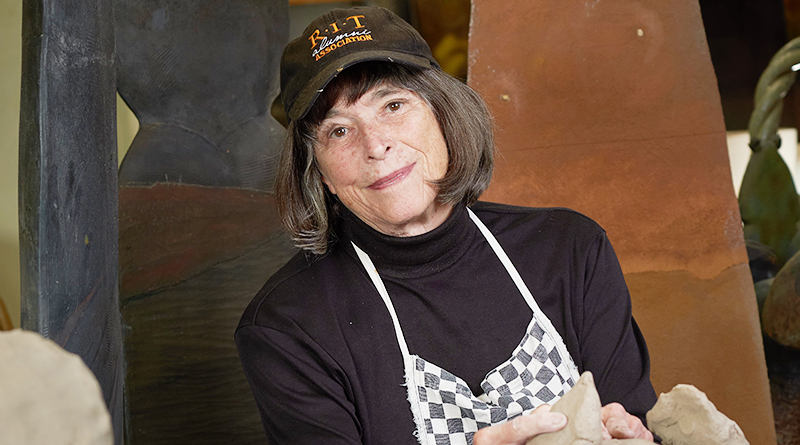 Sculptor Nancy Jurs expresses herself through the arts

A little thing can take your life in a new direction.

Back in 1958, a young woman was applying for admission to the Rochester Institute of Technology’s School for American Craftsmen when someone in the admissions office gave her a list of areas in which she could specialize. The teenager could only pick one.

“There’s choices of ceramics, wood, metal or textiles,” says Nancy Jurs. “I said, ‘Oh, I don’t know — ceramics,’ because that’s the only thing I knew.”

Jurs was accepted by SAC, (Now the School for American Crafts) graduated, and embarked on a long and fruitful career as a potter, sculptor and artist. Her ceramic works and other pieces have appeared in galleries around the country, gaining the praise of the art world.

“Triad,” one of Jurs’ largest sculptures, greeted visitors at the Greater Rochester International Airport for years. “Emergence,” which consists of two works from Jurs’ “torso” series, stands sentinel at the entrance of Rochester’s Memorial Art Gallery (MAG). Her recent solo show at the MAG was well attended, and she’s looking forward to taking her works to other venues in the future.

Looks like that young woman made the right choice that day at RIT.

Jurs was born in Queens, but moved with her family to a Philadelphia suburb before she was a year old. Her parents divorced, and she found herself living in Spencerport with her late mother, Lois Adams, and her two siblings (Jurs is name from of her first husand).

The desire to create ceramic works seems to run thr-ough Jurs’ family. Lulu Scott Backus, a relative from her distant past, founded the ceramics program at the Mechanics Institute, a Rochester institution that eventually became RIT.

Closer to home, the late Eunice Pietro was a first cousin of Jurs’ mother. Pietro, an accomplished, well-known ceramicist and teacher, brought some of her handmade pottery — platters and the like — to Spencerport when she visited the area. Those visits gave Jurs the chance to see some of the beautiful objects that can be shaped out of clay.

Upon graduating from high school, Jurs found herself, as she put it, “aimless.”

“I was very much a tomboy when I grew up, and very athletic, and I had no dream of what I wanted to be,” the 77-year-old explains.

All of her female classmates planned to marry, go to business school or get a job with the Eastman Kodak Company — that corporation was much bigger then.

Jurs knew such life paths were not for her. Though the teenager had worked as a waitress all through high school — her family had little money — her mother didn’t intend for her to continue doing that.

“She said ‘You should go to RIT, the School for American Craftsmen,’” Jurs says. “So, she dropped me off in the front there, and said, ‘Go in there.’”

After passing the school’s entrance examination, Jurs enrolled in its ceramics program. There, she studied under such professors as Frans Wildenhain, the Bauhaus-trained German potter and sculptor.

“When you do pottery, everything had to be absolutely technically perfect,” Jurs explains. “The teacher would take a wire, if you tried to make a pot, and slice it in half to make sure the sides were even.”

She was soon drawn to making raku, a type of Japanese pottery, using Western-style techniques. In a nutshell, a glazed pot, jar or other piece of artwork is heated in a kiln to at least 1,850 degrees Fahrenheit. It is then removed and covered with combustible material, such as wood chips. The piece’s surface reacts with that material, producing a variety of colors, shapes and textures.

“I like the spontaneity,” Jurs says of that process. “I want to take the clay, and see what I’ve made.”

Jurs married while at RIT, and then took a year off from her studies to have a son — Bryon Jurs. Upon graduating in 1963, she began making a name for herself as a potter. By 1967, she was separated from her husband. That year, she encountered the late Wendell Castle. While she’d met Castle before, when he was teaching woodworking at SAC, this time was different.

“He was divorced and I was separated,” Jurs explains. “We kind of looked at each other, and said, ‘hmmm.’”

She seized the moment.

“I told Wendell that I was doing raku, and I needed wood chips and stuff, so he invited me to his studio to gather up some wood chips,” Jurs says, with a twinkle in her eye. “I made that up.”

The two meshed, though there were differences.

“He was very quiet and pensive, and I was all over the place,” Jurs says. “He was more of an indoor person; I was an outdoor person.”

Eventually, the couple moved into an old mill in Scottsville that doubled as a residence and studio for the two.

“There were 50,000 mice in there, because all the grain and the soybeans were still left upstairs,” Jurs says.

“I wanted to have a baby, and he said, ‘Well, we should get married,’ so I said ‘OK,’” Jurs explains. “On a Tuesday night, we called all our friends, and said ‘Come over Saturday, we’re getting married, bring a dish.’”

Alison Castle, their daughter, was born in 1973.

The family eventually moved into a large home just a short distance away from their original residence, while retaining the mill as a studio. Castle became a celebrated woodworker and creator of beautiful furniture.

“I was Wendell’s biggest fan, and pretty much his only critic,” Jurs says. “I would go into his studio, and I’d see him making something, and I would say, ‘Wendell, that looks really clunky, I don’t know about that one,’ and he would change it.”

Down through the years, Jurs followed her own muse, expressing herself through the creation of beautiful pottery, striking ceramic sculptures, and art works from found objects. She also took care of Byron and Alison and the family home.

Castle died in January of this year of leukemia. For Jurs, the loss is still very raw.

Nowadays, Jurs spends a great deal of time and energy tending to her and her late husband’s affairs.

“I have a huge amount of work ahead of me settling the estate,” she says.

And, it is quite an estate. The family’s rambling two-story home is located on 16 rolling acres of land that afford a view of the Genesee Valley. A huge collection of both artists’ works fills the place, and Mr. Darcy and Lizzie, Jurs’ beloved Shih Tzus, gambol about. Outside the house, sculptures — most of them by Jurs — vie for attention with the many flowering shrubs and other plants that surround the residence.

Though Jurs enthusiastically shows off her large house and many works, time has begun to make itself felt — Arthritis in her feet makes walking painful at times. While she’s busy taking care of her estate, she hasn’t turned away from her career. Jurs’ solo show at the MAG was popular, and she’s looking for other venues in which to display her works.

• She uses found objects in her art works. Future pieces might feature the paint chips that Jurs is scraping up from her studio’s floor, or seashells.

• Gin is Jurs’ drink of choice.

• Both of her children are active in the arts.

• Jurs is skilled with a needle and thread, and made her own clothes for years.

There’s a side to Nancy Jurs that some might not see.

“When you see her gorgeous sculptures and vessels, that is one very significant manifestation of her creative spirit,” says longtime friend Sebby Wilson Jacobson. “But, when you get to know her as a friend, you see that her energy and creativity and passions manifest in a dizzying number of ways.”

Jacobson first encountered Jurs back in the 1980s, while covering the arts for the Democrat and Chronicle. After she moved on from that beat, the two developed a friendship that has spanned over 30 years. The relationship has given Jacobson a close look at the view Jurs has of the world around her.

When Rochester officials began seriously looking at eliminating part of the Inner Loop, Jurs joined those who decried the project. Her 2014 letter to the Democrat and Chronicle’s editors suggested a creative way to retain the roadway, which was useful for traveling around the city.

The city finished filling in that part of the Inner Loop in late 2017. Animal rights are also a particular interest of the sculptor, who has scattered her dog-like works around her Scottsville home and studios.

When not following her muse or focusing upon her other interests, Jurs enjoys relaxing at the large pond at her place in Scottsville, which she has stocked with koi.

“What we love to do is sit on the dock, have ‘docktails,’ feed the koi, swim in the pond,” Jacobson says. “Then, make a little dinner and tell stories.”