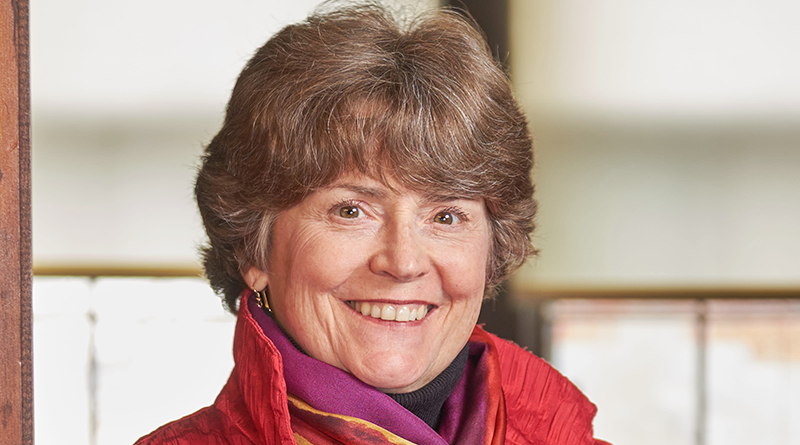 Perhaps it was her childhood as a minister’s daughter growing up in the 1960s, or her own adult role as a minister that prepared her to succeed as president of the National Susan B. Anthony Museum & House in Rochester.

Deborah Hughes’ personal journey of discovery through theology and her understanding of human nature did just that.

“My passion is in people, what moves, what inspires them and the social reform movement,” said Hughes of Greece.

“Susan B. Anthony’s life was during one of the times of greatest change in this country and she had a passionate belief in ‘we the people.’ I am committed to the stories and questions of social justice and human welfare,” she added.

Susan Brownell Anthony, born in 1820, was an American social reformer and women’s rights activist who played a pivotal role in the women’s suffrage movement.

Hughes, 56, is celebrating her 10th anniversary directing the Susan B. Anthony Museum & House as New York state recognizes the centennial of women’s suffrage. She said she finds quite a connection between the 150-year-old historical landmark and the state of our nation today, as society debates the parameters of politics, religion and rights of American citizens.

“The same questions we have now were surrounding Susan B. Anthony in her time. We had the revival and they were having similar debates at the turn of century,” Hughes said. “Humans don’t seem to learn as much as we might from prior generations.”

But Hughes did, and by surprise. Born to an ordained minister who worked not as a pastor but in ecumenical council, the youngest of four girls took the long road to her own work in the ministry. Hughes, the only sibling at home at age 10, moved with her parents from Rochester to Portland, Ore. when her father accepted a job as director of clinical ministries there.

Eventually, she attended the University of Oregon with a focus in pre-med, but changed her major several times — first math, then computer science, architecture and even business. Finally, when she realized she had many more credits than needed to graduate, she shifted to religious studies, and the rest, she said, was history.

“My emphasis was in church history, although my natural aptitude was in math, science and business,” said Hughes. “I was a preacher’s kid in some ways, but I was a critic of the Bible because it didn’t teach me what my parents taught me about God and faith.”

So In 1984, Hughes moved back to Rochester to attend Colgate Rochester Crozer Divinity School to pursue biblical studies with an emphasis in language to gain more understanding of the scriptures.

“For me it was a personal journey. When I thought about people in ministry, some of the leaders I most respected were graduates there and I was curious. I wanted to have the knowledge to respond to my questions about the Bible with integrity,” said Hughes.

Her commitment resulted in a deeper understanding of the nature of humanity, based on the Bible’s messages about values. Hughes’ studies led her to the conclusion that the stories in the Bible are a call to being generous, kind, thoughtful and welcoming to people who are labeled as outsiders.

“I found out the stories in the Bible are more descriptive of human nature rather than prescriptive of how we should behave,” she said. “These are amazing stories about human nature and it gives us something to align ourselves with, which couldn’t be more relevant today.”

Anthony faced similar discussions at the turn of the century when some biblical critics thought if someone’s religious affiliation results in how they respond to their neighbor, then they have missed the whole point, Hughes said. Because of that, she questions if humans learn as much as they might from history.

“It really is a good time to be reflecting on the past and thinking about what that means today. Social change is not something that happens overnight and it’s not an easy process. We are contributing to a larger movement with the smaller steps and choices we are making,” said Christine L. Ridanski, city historian, city of Rochester. “Deborah is an inspiration because she recognizes that within all these movements, past and present, it really comes down to one thing — the fight for humanity.”

Like Anthony did in her time, Hughes dedicates herself to supporting causes for humanity, as far away as Israel and El Salvador. Through the years, she has worked with the elderly, students, sexual minorities, women’s interfaith coalitions, the AIDS Interfaith network and participated in national flood and hurricane relief in New Orleans and Elizabethtown.

All of these efforts helped her witness what she refers to as an incredible capacity for tenderness and generosity that she feels humans learn in times of turmoil.

“When you go on missions and retreats, you really see the good and evil, and both are overwhelming,” said Hughes. “There is this deep, incredible joy that comes when people are really experiencing thankfulness. But there is also incredible pain and suffering that somehow humans can withstand. I saw some profound lessons over and over.”

Liberated as a lesbian

After receiving a Master of Divinity from the Rochester Divinity School in 1987, Hughes moved to Birmingham, Mich., to become associate pastor of a Baptist church there. The move was surprising because her studies in seminary were primarily Presbyterian. But it was also her own discovery of her sexuality as a lesbian that helped shift her life’s path and purpose.

Hughes spent seven years answering her calling at the church in Birmingham before returning to Rochester to accept a role with the Ministers and Missionaries Benefit Board. The return to her roots not only offered her ongoing work in the ministry, she said, but provided her the opportunity to fully align herself with her own truths.

“When I got the job in New York for the pension board, it was so freeing for me. They had recruited me in part because I represented the LGBT community,” she said. “I got to come out as a lesbian and I did pastoral care related to people with AIDS. It was a great job.”

Hughes’s passion for theological exploration eventually came full circle when she left the Ministers and Missionaries Benefit Board to become the vice president of development for the divinity school. A short time later, she became the associate pastor of Third Presbyterian Church of Rochester. She never expected her ongoing work in the ministry would lead her to the Susan B. Anthony Museum & House in the 19th Ward.

“A friend sent me the job listing for executive director at the Susan B. Anthony House and said it looked like me,” said Hughes. “I had no idea how to take care of a museum, but what really engaged me was that it sat in a city neighborhood with challenges, which ignited my questions about social justice and welfare. I was so energized, I knew it was where I was supposed to be.”

But it was not easy. In the middle of a renovation, the independent museum was facing serious funding issues, and like her historical mentor, Hughes rose to the challenge.

“Susan B. Anthony had a lot of trouble funding her cause. Today, we have trouble funding women’s history and women’s issues,” she said. “We are vulnerable; at least two-thirds of our budget comes from donations, generous people who believe in what we are doing.”

That financial assistance combined with her prior experience in nonprofit management allowed forward movement for the restoration and the museum, and staying on task of maintaining a site that represents Anthony’s life work.

“We had a very dedicated staff, tremendous volunteers and a great board who understood the reality and who were supportive and willing to make it a go,” said Hughes. “So we started to rebuild and increased our operating budget by more than $500,000. There is a piece of that that is just a plain miracle.”

Through the years, many others see Hughes’ work as its own miracle, and in 2016 she was nominated for a prestigious Athena Award.

Hughes is currently nominated for Rochester Women’s Network 2017 “W” Award, Women Inspiring Women, for women going above and beyond daily expectations to support, empower, influence and inspire other women through her own example.

“The human condition is so complex and often so broken. Only those who can heal hearts can really move our world forward in ways that restore hope,” said Nancy M. Watson in a recommendation of Hughes for the “W” Award. Watson is a retired University of Rochester School of Nursing associate professor and nationally recognized researcher.

“Without hope the spirit dies, the pain overwhelms, the alternatives become bleak to self and others. This is what Deborah Hughes knew and led others to see,” Watson added.

Hughes sees hope with all of her work — from the callings of ministry to disaster outreach, to sharing Anthony’s history with integrity each day in spite of the limitations of a small endowment — an issue for every arts and culture organization, she said.

“Even though we have been operating paycheck to paycheck, I would rather spend our energy thinking about how we can tell Susan B. Anthony’s story in ways that are engaging and exciting,” said Hughes. “We have been doing it for 70 years and we’re going to keep doing it.”

When she’s not working to keep that passionate story alive, Hughes directs her energy to her other passion — sailing. Last fall, she purchased a 32-foot sailboat named Tradewinds that she sails with her first mate and life partner of five years, Emily Jones. Jones is helping Hughes to fulfill her dream of becoming an accomplished sailor.

“Deborah’s energy is infectious, her attention to detail is incredible, and her ability to fill a project with learning and laughter is what causes me to take on this sailing adventure with great joy,” said Jones.

Hughes is a mentor for the old and young, filled with creativity and energy, according to Louise Woerner, the first lifetime member of the Susan B. Anthony Museum & House and 1990 Athena Award recipient, in a letter to the 2016 Athena Award Committee in Rochester.

“Deborah’s authentic self and communication skills create confidence that is contagious,” she said.

Maintaining the foundation of Anthony’s work feels like a natural fit for Hughes, whose own life’s mission is to be true to her inner self while facing both challenges and triumphs with passion and purpose. She celebrates the authenticity that comes from history — then and now.

“Some people don’t find history interesting,” Hughes said. “But I didn’t know it could be so much fun.”