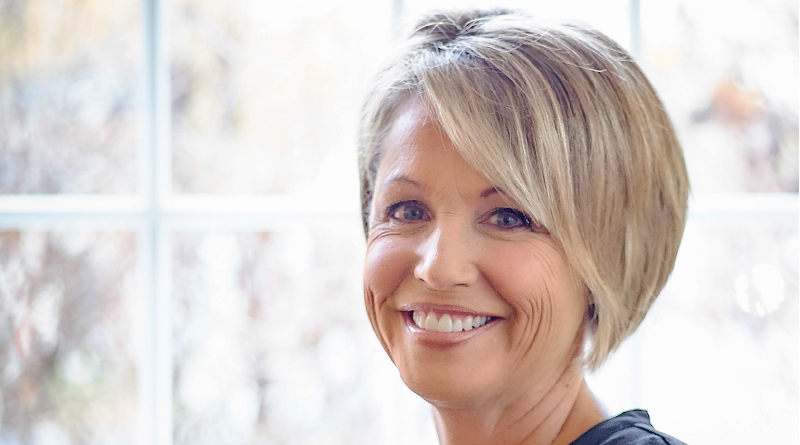 Former news anchor enjoying her new life as an entrepreneur

Robin De Wind sounds ready to take on her next challenge.

“Most of us look for the comfort zone,” she says. “I feel invigorated being out of my comfort zone.”

That desire to climb the next mountain has taken the 55-year-old from cub reporter for a Rochester television station to heading her own company, Robin De Wind Media Group. Not bad for someone who hates to be photographed.

De Wind didn’t set out for a career in journalism. She was raised in Pittsford, one of two children in a working-class family. Her mother, Patricia, was a stay-at-home mother until she took a job as a waitress to bring in extra money. She is now retired. De Wind’s late father, Robert, was a tower crane operator who worked on the Irondequoit Bay Outlet Bridge, the old Can of Worms highway interchange and other large construction projects.

Though he died when she was 27, De Wind needs only to drive past those sites to feel her late father’s presence.

A love of sports — and of one special team — ran through the De Wind family.

“We got cable to watch the [New York] Yankees. My dad taught me the game of baseball to keep me busy,” De Wind says.

At the time she graduated from Pittsford Sutherland High School, De Wind had no idea what to do with her life, though she had edited her school’s yearbook and shown some skill as a writer. When she entered St. John Fisher College in Pittsford, the teenager decided to study communications, intending to become a newspaper reporter.

Before her second year ended, De Wind knew a career in print news was wrong for her. Marketing and public relations also didn’t appeal to her — at least, back then. She was a senior and growing panicky about her future, when a girlfriend who was studying broadcast journalism recommended that she take a class in the subject. De Wind hesitated.

“I have photo albums with me with dark glasses on as a child. Never liked having my photograph taken,” she says. 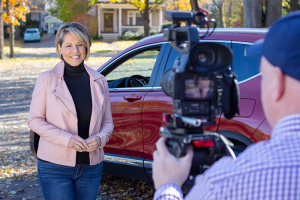 Nonetheless, De Wind decided to enroll in the class. As part of her studies, she did an internship at WHEC-TV (channel 10). On her first day, the station sent De Wind and a cameraman to a local hotel to interview the late George Steinbrenner, who was then the principal owner and managing partner of the Yankees.

“I come back, and we put the story together, and I’m like, ‘You can get paid to do this?’” De Wind says. “That’s when I fell in love with broadcasting.”

After graduating from college in 1985, De Wind spent about 2 ½ years working part- or full-time for radio stations in Warsaw, Batavia and Rochester.

“I learned to do radio news, which was a wonderful craft at that time,” she says.

An additional part-time news position as a production assistant at WHEC gave De Wind the chance to gain more of the skills she needed to break into television, and to create a demo tape. Aspiring TV reporters and news anchors use demos to show their skills to potential employers.

WROC-TV (channel 8) hired De Wind as a full-time reporter in 1988. During her time with the station, she covered the 1991 ice storm that caused havoc in the Rochester area, the $7 million robbery of the local Brinks armored car depot and many other stories, including the pursuit, arrest and trial of local serial killer Arthur Shawcross.

“We were following the police when they caught him — he was in the car ahead of us,” De Wind explains. “I thought, ‘I can’t believe this!’”

Shawcross was convicted in 1991 of murdering 10 women.

When her contract with the station ended, De Wind headed back to WHEC to become the first full-time medical reporter in the Rochester area.

“Every day I sat on the desk, I was telling people something that could help them,” she says.

She even took viewers into operating and examining rooms, covering a cardiac catheterization, surgery on a patient’s wrist, a mammogram and other medical procedures. By 2008, De Wind was doing a daily segment on medical subjects and anchoring WHEC’s 5 p.m. newscasts.

2008 was a year of great changes. De Wind and her husband of eight years divorced, and the two began co-parenting their daughter, Sophie Startari. In addition, WHEC phased out its medical coverage and made De Wind sports director.

De Wind’s knowledge of sports and willingness to learn, along with the help of experienced station staff, helped her take on that role. Though initially nervous about interviewing members of the Buffalo Bills in their locker room, she tackled it with her usual energy and the assistance of WHEC’s sports photographers.

“I would go in there and make eye contact, get what I wanted, and get out,” she says.

It soon became the best part of the job.

“I was learning something every time I walked in,” De Wind explains.

In 2013, WHEC decided not to retain De Wind as part of a consolidation. While she did not initially welcome the change, it did give her a freedom that she’d long been denied by her long working hours and the need to prepare for daily broadcasts.

Using her severance package, De Wind spent about the next 18 months re-examining her career goals, and searching for a position outside of the broadcast news field that used her skills and talents. She also began connecting with daughter Sophie in new ways.

“Suddenly, I’m on a [school] field trip, because I had time,” De Wind says. “I got to watch her, and be more engaged in her. That year-and-a-half, I enjoyed that.” 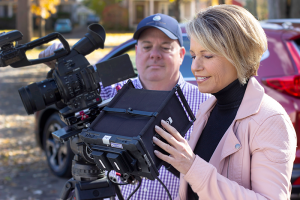 At the same time, she gained more time to spend with her mother, Patricia, who is now 86 years old.

“She needed more help. I enjoyed being available to give that,” De Wind said.

While hunting for a full-time position, De Wind worked freelance, writing press releases, creating video content and doing on-camera work for companies. After coming close to being hired for a number of high-level positions, she decided to start her own company. The Robin De Wind Media Group was born in 2014.

Nowadays, De Wind puts much of her energy to use creating the messaging, strategies and videos that her clients need to tell their stories. Though she’s very busy — hers is a one-person firm — she enjoys the flexibility that comes with setting her own schedule. That schedule allows her to help her mother Patricia out and spend time with 14-year-old daughter, Sophie, a ninth-grader at Fairport’s Minerva DeLand School.

She’s also renovating the three-bedroom home she recently moved into in Fairport. Asked whether she is the kind of “tool person” who might be prone to taking on that kind of project, De Wind has a quick reply.

“Do I look like a tool person?” she says, laughing. “I just thought it was going to magically be, if I moved in.”

When she heads out to socialize, De Wind usually does it with friends. A good evening often includes a good movie and a steak dinner.

“I love steak, medium-rare with mashed potatoes, and asparagus and a glass of good cabernet,” she says.