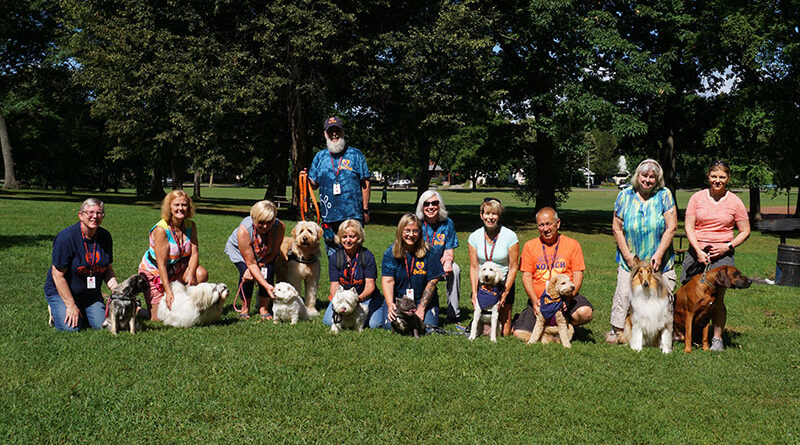 A visit from Joshua can be the perfect stress reliever.

“He’s so huggable, you just want to touch him,” said James VanBrederode, chief of the Gates Police Department. “It just tempers the whole atmosphere for the day.”

Joshua, a good-natured, 20-month-old goldendoodle, is a therapy dog.

“A therapy dog is a dog that has been trained to visit with people, just to give them comfort,” said Paul Anthony, Joshua’s owner.

Paul, who turned 69 on Oct. 21, and his wife, Susan, are the co-founders of RocDog, an organization which brings dogs, like Joshua, and their owners together with those who need their spirits lifted, their tension eased or just a chance to smile.

Since RocDog was created in February, dogs and their owners have visited the Gates Town Hall, local nursing homes, hospital inpatient wards, police stations and other sites. Joshua, the first pooch on the organization’s roster, has even comforted those at the scenes of two suicides.

RocDog has applied for nonprofit status under federal law, but has not received it yet. Paul, RocDog’s president, Susan, its vice president, and all of the organization’s members volunteer their time to help others.

“I really feel like this is what God has called us to do, and I’m really excited about it,” 68-year-old Susan said.

The Anthonys, who are originally from Bakersfield, California, have led colorful lives. Paul has a bachelor’s degree in social welfare, but worked in oilfields as a mechanical designer before co-founding a firm that did industrial machining. Susan worked as a teacher for 38 years before retiring.

After the machining business failed, the Anthonys, who are lifelong Baptists, worked for the local chapter of the faith-based nonprofit Youth for Christ.

“We worked with kids that were on probation,” Susan said.

Paul headed the chapter’s juvenile justice ministries while Susan organized its events and coordinated the activities of its volunteers.

About four years ago, they moved to Greece, in part to be close to one of their two grown daughters, who lives in town with her husband. Susan now spends her days as a receptionist for Strong Memorial Hospital. Paul is a mechanical designer for a local firm.

In addition to working full-time, the Anthonys also volunteer as chaplains for the Gates Police Department and spend 30 to 40 hours a week running RocDog. Paul administers the organization. Susan does its books and performs other tasks. Both spend time with Joshua at various sites around Monroe County.

Paul first encountered therapy dogs about two years ago when he attended the viewing of a local firefighter who had died.

“Going to the viewing for any first responder is something I try to do,” Paul said.

A number of people brought their therapy dogs to the funeral home that day.

“I saw firsthand the peace and comfort the dogs were able to give by just allowing people to come up to them and interact for a few minutes,” he said.

The couple already had two pooches, but Paul began to think about taking in another to train as a therapy dog.

“God and I were talking. God was telling me I needed to do something,” he said.

The Anthonys acquired Joshua from a breeder in Hilton last December. Unfortunately, none of the therapy dog nonprofits that serve this area were willing to train him or put him to work.

“The national groups were all completely shut down because of COVID, and said they weren’t going to do anything until everything was back to normal,” Paul said.

The Anthonys decided to take action on their own.

The couple spent $3,000 of their own money to incorporate under New York state law and apply to the federal government for nonprofit status. Then, they turned to certified canine trainer Rebecca Rene, the president and founder of Woof2Hoof Canine Training, to prepare Joshua for his new role.

Dogs and their owners must demonstrate certain qualities to qualify for RocDog’s therapy dog training program.

“Does your dog want to engage with others?” Rene said. “If your dog is not interested in meeting people and engaging with others, the therapy piece is probably not a piece that your dog would enjoy.”

The dog also needs to be able to control itself under normal circumstances. The pooch and its owner have to have the right kind of relationship.

“The handler and dog need to have a good bond,” Rene said. “They also need to have a bond of respect as well as security, so that the dog feels comfortable going into a new situation and meeting new people.”

Rene’s training program consists of eight one-hour weekly classes that are designed to expose dogs and their owners to new situations, and help them learn how to respond appropriately to them.

“We expose the dog, in class, to a lot of chaotic situations, so that the dog can learn to handle itself and not be fearful, not be overly excited,” Rene said.

In one training situation, a child bounces a ball in front of the dog.

Dogs in training are also exposed to different kinds of people and to walkers and other medical equipment.

Rita Metras and her dog, Darla, a 9-year-old German shorthaired pointer mix, learned how to approach someone in a wheelchair.

“You approach them from the side,” the 73-year-old Webster resident pointed out. “You want to get the dog in a position so the person is comfortable petting the dog and doesn’t fall out of the wheelchair.”

Dog owners are encouraged to practice such skills with their four-legged friends between classes.

“You need to go home and replicate that scenario many times for your dog,” Rene said.

Dogs that complete the training course then have to pass a test to become certified therapy dogs. Graduates are awarded a RocDog bandana and dog tag. Their owners are given ID cards stating that they are members of the organization. Paul then helps the dogs’ owners select places in which to do their new jobs.

“My volunteers, as they get certified, I basically ask them where do they want to go,” he said.

Darla graduated from therapy dog training in May and became one of RocDog’s first five canine members. Since then, she and her owner have paid a number of visits to a local nursing home.

“It’s so cool to see people’s faces light up when they pet the dog or see the dog, particularly those who are in a health care facility,” Metras said. “It reminds them, sometimes, of their own dog and they start talking about their life.”

Metras and her four-legged friend have also helped the dispatchers at Monroe County’s 911 Center reduce their stress. Just petting the pooch can do it.

“If the dog is soft, and Darla is very soft, it just releases stress,” Metras said. “It makes their day a little lighter.”

Joshua has helped people deal with a great deal of stress. Last February, he and Paul responded to a Gates home in which a suicide had taken place.

“It was a young man, probably around late 20s, suffering from depression and substance abuse, and hung himself,” said VanBrederode, the Gates Police Department chief.

When the RocDog team arrived, they found the man’s brother, who was of high school age, in the front yard.

“Joshua and I sat in the front yard for an hour with him,” Paul recalled. “He just sat in the yard, just petting Joshua, kind of crying.”

The therapy dog’s presence even helped the police officers on the scene get through the difficult situation.

“Six different police officers came up to me and thanked me,” Paul said. “They were very happy I was there.”

Volunteering for RocDog comes with costs that go beyond the time it requires. Each dog owner has to pay for his or her dog’s training and pass a background check. Owners must also pay $85 in dues to the organization for the first year, which covers the background check, the fee for the dog’s certification, insurance for the dog and handler and other costs. Subsequent dues come to $50 a year.

Despite these costs, 30 dog owners have signed up with RocDog since it was started, adding 24 dogs to its canine roster. As of mid August, they were visiting 19 different locations around Monroe County, including Unity Hospital, the Greece Police Department’s headquarters, the Monroe County Sheriff’s Office’s downtown facility and local nursing homes.

The Anthonys are trying to sign up new sites to which RocDog’s four-legged members could go to work their magic. They recently started Paws for Hearts, a program that could help those with special needs avail themselves of the nonprofit’s services.

When not working or running RocDog, the Anthonys enjoy driving around the area to see the sights and taking long walks on Greece’s section of the Erie Canal. On Aug. 2, they celebrated their 46th wedding anniversary.