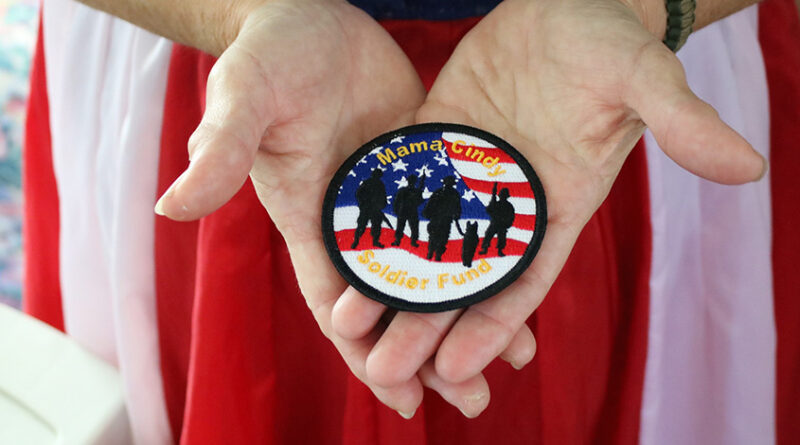 Livingston County woman sends pieces of home to soldiers, sailors all over the world

How big is your heart? We all have good intentions to be our brother’s and sister’s keeper. But how far do those intentions go?

How would you react to a need that you know others view as being too difficult? Too personal? Impossible for one person? Too time-consuming? Too expensive?

Those questions breezed through Cindy Strasburg’s mind in 2005.

“ Breezed ” because she immediately set them aside and went to work.

Every weekend Strasburg, 66, living in the middle of God’s country in Livingston County, in the town of Hemlock, sends out packages to American sailors, marines, soldiers, coast guardsmen and airmen all over the world.

She averages at least 100 of those packages a week. She calls them “Diddy Bags.”

More than a century ago, sailors would pack their most valuable personal items in a small wooden box, a “ditty box.” Often, the ditty boxes were decorated with scenes of ships or far-off places. What Strasburg sends out is the size of a post office flat-rate box, stuffed carefully with goodies and useful items.

But there’s so much more.

With each diddy box that goes out, she includes a handwritten note to the soldier. She adopts a whole unit, packing smaller boxes into bigger boxes and sending everything to one person. Then he or she distributes all the small boxes or items to individual soldiers.

“My friend, Wendy Parcels, we were in the fire department and the Hemlock Fair Association together — got orders to go to Iraq with the Army National Guard,” said Strasburg. “She sent me an email from Iraq that said, ‘I wish I had brought some heavy slippers or socks because it’s so cold over here.’”

“She was a material readiness officer. She provided supplies for the top third of Iraq,” Strasburg said. “I went to my local Livonia American Legion Post and said, ‘I’ve got a soldier who made a wish and could we grant that wish for her?’ They gave me a $100 donation and I bought enough slipper socks and socks for the whole unit. I told Wendy, ‘Wish granted. Make another wish.’”

“It started with that one wish,” Strasburg added.

Over time, she found out what soldiers wanted and needed.

“Wendy is an officer who supplies for many soldiers,” Strasburg said. “I sent her supplies to reach soldiers of need. That became her connection for the rest of her tour. There are so many soldiers of need who can’t go to a PX or commissary; they’re in an outreach area. She got my packages to them.”

“A lot of soldiers just want a connection home. When they would write me about things they’d miss, I would grant their wish in a different way,” she said.

To help crush the nothingness of downtime in service life, she developed a Take A Soldier to the Movies program.

Dansville Home Video got on board and donated VHS tapes and then DVDs, hundreds of them.

“I sent my soldiers the movies and all the fixings — popcorn and candy bars. The store supported me until they went out of business,” Strasburg said. “One group wanted, since it was so warm out, to have movie nights. So I sent them a king-sized white sheet to use as their screen. I sent a note and said, ‘I couldn’t send you a big-screen TV, so here’s your sheet: make it work.’ And they had outside movies.”

A seamstress by trade, Strasburg would make small items for her soldiers and she developed a system for her diddy boxes.

“I had 23 soldiers in one unit, I told them, ‘You’ll never have to buy a toothbrush or toothpaste or dental floss as long as you’re there.’ I sent enough for the full unit,” she said. “That week the package was entirely toothbrushes, floss and toothpaste.”

In the third week, packages contain reading and writing materials.

The fourth week takes care of the feet — socks, foot powder and soles.

After that, soldiers have an expectation and make-a-wish starts.

One overseas unit asked for fidget-spinners (ask your grandkids) and she got them. Another wanted little battery-operated personal fans. She got them shipped out.

“I’ll send breakfast, instant oatmeal hot cocoa, coffee, tea, sugar, drinks-to-go mixes, cookies, crackers, granola bars, trail mix, hard candy, Slim Jims if I have them,” she said. “In wintertime they get chocolates, as much as I can send.”

“One unit was in-country and said to me, ‘There’s nothing here to do, there’s no gym, there’s no PX, there’s no commissary, there’s nothing. You send us a ball we’ll figure out a game.’” She continued. “So, they got three huge boxes — they got volleyballs, they got hand-throw balls, badminton rackets and birdies, tower puzzle games, playing cards, dice and checkers.”

“I put everything in a zip-lock bag (there’s a lot of dust and sand in the deserts and mountains). Ninety percent of what I ship comes out of the original package and goes into a zip-lock bag. If it’s a food item, I’ll include the ingredients label so they know what’s in the food item. They have to burn and destroy all the packaging. I don’t pack food with personal care items because you don’t want your food tasting like soap,” she said.

A Special Forces kid in Africa wrote to her —“Mama Cindy, I’m going to get burnt in Africa.”

“I told him, ‘The first package will have sunscreen and Chapstick, she said.”

Funding for all this

Where does the money for all this come from? In the beginning, it started with that $100 from the Livonia American Legion and tips from her seamstress customers, who themselves became donors.

Strasburg applied for and received grants. It was something she had also done for the fair association.

In her weekly trips to the post office — another adventure — she often runs into people who “see me coming in with my packages on a trolley and when I tell them this is for soldiers overseas, I’ve gotten many donations right there in the parking lot. They’ll give me $20 and say, ‘I hope that helps.’”

Many people and groups donate supplies. People from far away have purchased vanloads of supplies and brought them to her or met her in Geneseo for coffee and a load-swap.

And there’s no mystery about how she affords what she does. It’s all detailed by the month on her Cynthia Strasburg Facebook page and on her website www.mamacindy.freeservers. com.

The donations and who sent them, the expenses for buying items and the shipping are listed to the penny. On the wall of her immaculate workroom in the back of the house she has a sign noting that she’s spent $164,000 on troops since 2005.

The accounting of what comes in and what goes out gives a professional reassurance to people who donate. Recording all of that is a lot of work for one person to accomplish.

Her diddy bags and packages are familiar in 30 countries around the world, to 9,000 soldiers and those serving on 14 active-duty ships.

When one of her adopted service units comes home, she picks up another.

It’s one thing to send a soldier some trail mix and socks; it’s another to decorate each box and pen a personal note citing encouragement and love.

And it’s no wonder she gets responses, which she also highlights on her Facebook and Internet pages.

“Every package gets a handwritten letter from me,” she said. “I tell them how proud I am of them and I thank them for their service. One soldier recently told me, ‘That’s nice to hear, because I don’t hear it from the people I need to hear it from.’”

She has been a longtime doer. But her soldiers’ project is a calling.

When she married her third husband, he brought two of his children to the family. To help ease the passage to a new mom, she wanted to honor her stepson’s birth mother: she didn’t want the boy to call her ‘mom” and asked him to choose another name for her.

Mama Cindy was born that day

She welcomes all the units she adopts with an open embrace.

That love gets returned.

“One soldier on R&R came to my house and asked me, ‘Are you going to adopt all of my soldiers?’ I said ’Absolutely.’ He said ‘OK! Hold on.’ and he called his commander overseas. The soldier said, ‘I’m at Mama Cindy’s. She’s going to adopt everyone in our unit overseas. Hey guys, I got Mama Cindy on the phone!’”

She got the roster of that unit with everyone’s name. There were 410 soldiers in that unit.

“Oh Father! I had made a promise. I made sure every one in that unit got a diddy bag with a personal note and their name on it. Then I contacted their commander and said, ‘Just to let you know you have 436 soldiers in your unit and they all got something,” she said. “Now I ask how many are in the unit.”

“Another soldier who visited was in the Army. His grandfather brought him to see me. He had come home from Afghanistan and found out his wife had left him. He didn’t want to go back to Afghanistan. He didn’t want to live anymore,” she said. “His grandfather asked me to talk to him, please. This soldier was taller than my Christmas tree. We talked.

“If I can put in a box something that would take care of a soldier’s mental, spiritual and physical well-being, maybe just maybe that will give him the strength to come home to his loved ones once again.”

“I got a request from a commander of a medical unit in Afghanistan who contacted me through email, saying, ‘Mama Cindy, I need your help. There was an IED that went off and an Iraqi family got hurt. The parents and one child lost their lives. We have a toddler and infant and we have nothing for them. Can you help us? I know if I go to any other organization, they’ll have to have a meeting, they’ll have to approve…but if I come to you…’

“Upstairs in the house I had received a huge donation from Dansville Hospital. I had just put it away. Everything they needed was in those bags. God had provided. I packed it and I shipped it out that very day. I sent an email to the commander: ‘Everything on your list is on its way,’” she said.

As you’d expect, Strasburg outdoes herself at Christmastime. Around Thanksgiving, she sends out Christmas cards and envelopes so troops can send them back home to their loved ones. At Christmas her diddy bags change and enclosed are her personal note, a Christmas card and gifts, which are all individually wrapped. And nobody wants for Christmas candy.

One of those boxes arrived on a ship Christmas morning. Who says there isn’t a Mrs. Santa Claus?

“I’m one mother who feels you can make a difference in someone’s life,” she said. “People help in ways they can. For my soldiers, I have to make sure everything I send is perfect and of good quality. As long as I’m on this earth, this program will continue.”

“This mission was given to me by the Lord,” she said. “I had a soldier in Iraq who would call me at night – my answering machine never goes on at night. He said, ‘Oh Mama Cindy, we just got done with a mission, some of my unit was shot by insurgents; our gunny sergeant got shot and I had to administer first aid and I thought I was going to get shot. I called home and nobody answered. How come you answered?’ Because you needed someone to talk to,” Mama Cindy said.