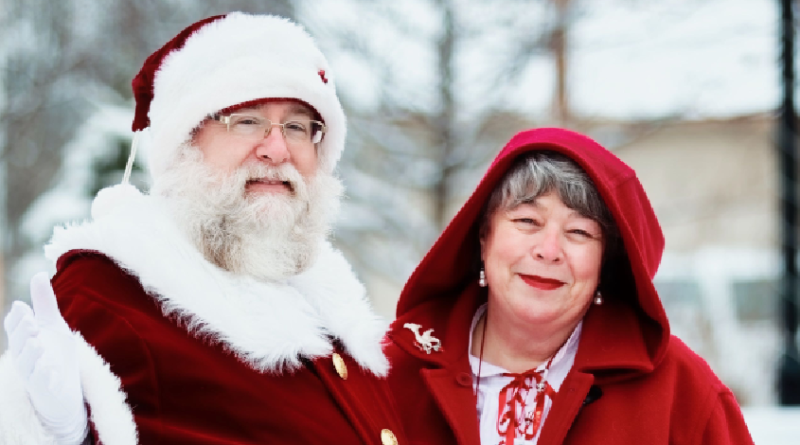 ‘I had always wanted to play Santa,’ says Jeff Meteyer 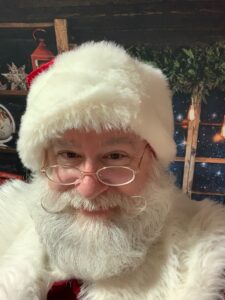 F or Jeff Meteyer, the best part of playing Santa Claus is working with kids.

“It’s one of the most recognizable ways to establish a bond with a child,” the 57-year-old West Irondequoit resident says.

Meteyer and his live-in girlfriend, 62-year-old Gemma Divine, have played Santa and Mrs. Claus for about four and a half years, bringing the feel of the holidays
to everything from house parties to municipal Christmas tree lightings. They’ve already donned their costumes for events this year, and are looking forward to helping little ones and their families celebrate the coming holidays throughout Monroe County and as far away as Corning, Steuben County.

It all started for the pair back in 2018. Meteyer was newly divorced and facing his first Christmas alone and without young children — all three of his kids are grown. Seeking an opportunity to interact with little ones, he decided to follow a longtime dream.

“I had always wanted to play Santa,” he says.

Meteyer already had a curly, white beard and mustache, and bought a Santa Claus costume to go with it. He got his first chance to play St. Nicholas when a friend of Divine’s complained of not being able to hire someone to play that role at a family Christmas gathering. Meteyer donned his costume, Divine put together a
“Mrs. Claus” outfit and the couple brought some cheer to their friend’s gathering.

We had a ball!” Divine says. “We just laughed all night long.”

The pair enjoyed it so much that they decided to look for chances to play the jolly old elf and his wife for a fee. A visit to the Corning Museum of Glass for the 2019 Christmas in July celebration led to their first paying gig. The museum’s regular Santa could no longer do the job, and its staff was desperate for a replacement.

Meteyer and Divine played Santa and Mrs. Claus for a series of breakfasts and lunches at the museum that year, and have returned every year since then but for 2020, when COVID-19 forced the cancellation of the events. Altogether, the two have played Santa and Mrs. Claus at family parties, celebrations at shopping malls, municipal tree lightings and other events at least 100 times down
through the years. They’ve even played the office party for the University of Rochester’s information technology department, where Metyer works full-time as a reporting manager. In addition to playing Mrs. Claus, Divine is employed full-time as a licensed medical technologist.

Though Meteyer’s belly shakes when he laughs, he doesn’t do some of the other traditional Santa stuff.

“Ho-ho-hoing is one of the least things I do,” he says. “I would qualify myself as more of a quiet-toned Santa.”

Instead of sitting on a large chair, Meteyer perches on a kind of love seat and invites kids to either sit on his lap or on the seat, whichever is more comfortable for them.

“They can have their parents sit on the chair with them, if they wish,” he says.

The approach is less apt to intimidate children who might be nervous about meeting a 5-feet-10- inch, 249-pound stranger with a six-and-a half-inch beard. Children can put their Christmas wish lists in a kind of mailbox that sits nearby, but some prefer to just talk to him.

“They actually do want to have a conversation, and ask questions about ‘How did you get here? Tell me about the reindeer. Where’s your sleigh?’ those kinds of things,” Meteyer says. Such times keep him donning his costume year after year.

“ I enjoy seeing how kids communicate, how they get excited about the experience to be able to talk to Santa, and their reactions when someone is intently listening to them,” he says.

COVID-19 cut into Meteyer ’s ability to communicate with kids. During the pandemic, he and the kids had to wear masks and stay 6 feet apart. If they touched his costume, he had to spray it down with disinfectant.

“I’m sure at some point, some kid was saying ‘Why does Santa smell like Lysol?’” Meteyer says.

While Metyer entertains the kids at an event, Divine walks the line of those waiting to see him clad in a full Mrs. Claus costume.

Part of her job is to calm down kids who are growing too excited about seeing Santa.

“I visit with them while they’re waiting,” Divine says. “We chat about what they’re going to talk to Santa about.”

In rare cases, the kids become so nervous they break into tears. That’s when the candy canes come out.

“Sometimes you pull a candy cane out of your pocket and they dry up just like that,” Meteyer says.

He and Divine only hand the candy out with the permission of the adults who bring the kids.

In addition to the love seat and mailbox, Meteyer and Divine bring a pair of folding Christmas trees as decorations. They also hire photographers to digitally capture kids’ and families’ meetings with them. Sometimes the adults they encounter make the best pictures.

“When we walk into a room with a bunch of grownups, they are 10 years old again,” Divine says.

Meteyer’s day as Santa doesn’t really end until he’s back home, and has read all the letters to Santa and wish lists in his mailbox. One from a 9-year-old girl who had been adopted really hit him.

“She said ‘I want to be able to spend my Christmas with my mom,’” Meteyer says. “You will find me sometimes with a glass of milk and cookies bawling like a baby reading some of these wish lists from the kids.”

The holidays are Meteyer and Divine’s busy period, but they can begin doing beach photo shoots in costume as early as June and holiday events as late as the first week in January. After that, the local Santa Claus shaves off his whiskers, only to begin re-growing them in March.

Those wishing to hire Metyer and Divine to play Santa and Mrs. Claus can go to www.gigsalad.com and look for “Mr. and Mrs. Claus.”