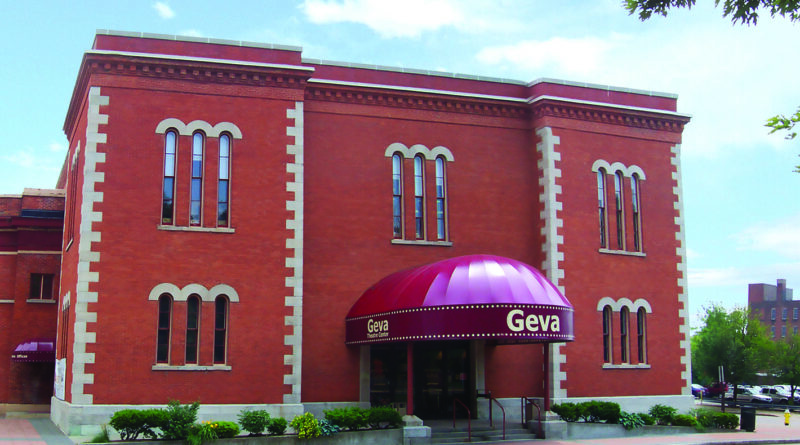 In its history and presence, Geva Theatre in Rochester has dealt in all these things.

Now in its 50th season, Geva lays out the gifts new artistic director Elizabeth Williamson has brought with her. Expect to be moved and awed. Expect to leave the theater singing on some nights. Expect to be left with so much to think about. Expect to remember a scene and laugh to yourself.

Williamson, 43, brings an elaborate and definitive pedigree with her. Raised in a family of two generations of poets and academics, the muses hung lightly in her home. She started with puppet shows using her stuffed animals behind the back of the couch.

Did she do the directing?

“Of course,” she said with a big proud smile. “When I was 12, I started writing and directing my friends in little shows every summer. The most successful one was about Joan of Arc. I was not Joan. I thought I wanted to be an actor but what I was actually doing was writing and directing. I made my best friend play Joan of Arc and she had no interest in acting. She turned out to be a real political activist later in life. I think I saw that streak of determination and idealism in her and I said, ‘You’re Joan of Arc.’ I’ll play the supporting roles.”

“It had the dauphin and the voices of the saints who came and spoke to Joan and her rallying the troops and everything. It was me and my best friend and her little sister. And, three of our other friends that we sort of dragooned into doing it,” she added.

College at Bennington in Vermont. Grad school at Oxford University. She was following the track her family had. Then, got off the rails. Way off.

“I was pretty radical,” she admitted. Her parents and grandparents were English lit experts: she went rogue with deep studies in French literature at Oxford.

She loved the research, but didn’t want to do scholarly articles.

“I wanted to turn what I learned into pieces of theater. I loved digging into novels and all sorts of research and turning that into (theater) art,” Williamson explained.

She did theatrical training at Ecole Internationale de Theatre Jacque Lecoq in Paris.

“There’s an extraordinary theater company that’s based out of London called Complicite. They made a number of extraordinary shows, a lot that came to America through the Lincoln Center Festival. I was really blown away by their work when I was in my 20s and I trained with them a bit. It turns out they had all trained at Ecole Jacques Lecoq. So, that’s where I wanted to go,” she explained.

She learned how to create stage pictures, how to work with actors, how to move people on stage, how to amplify the words in a play visually.

Williamson was one of the youngest people (22) to get accepted to the Lincoln Center Theater Directors Lab in New York.

“The focus the year I went was how to direct style and how to direct contemporary style,” she said. “Of the 100 or so directors who were accepted in that summer’s program, about a dozen of us were also accepted to direct workshops of contemporary plays in different styles. I had chosen Sarah Kane’s play for 4:48 Psychosis. I had the opportunity directing a workshop figuring out how I would create the world of that play.”

And what a play — an intense choice. One critic described it as a “suicide note.”

“I did a number of early-career director things that young directors do if they’re lucky,” she said.

The training at Ecole Jacque Lecoq helped her straighten out her career path.

I realized I wanted to train by watching other directors at work. So, I started to do a fair amount of associate and assistant directing. And I worked with a lot of extraordinary directors who direct shows that move extremely well and have very strong visuals and visual metaphors,” she said.

She worked with Dominique Serrand at the Theatre de la Jeune Lune he founded in Minneapolis. At Steppenwold Theatre in Chicago she was the dramaturg for Mary Zimmerman’s production of Monsieur Proust. She assisted JoAnne Akalaitis at the Court Theatre in Chicago.

What’s a dramaturg? It’s someone who researches, adapts, produces and directs productions.

At 29, Williamson was named the associate artistic director for Pioneer Theatre Company in Salt Lake City.

“Pioneer Theatre is like the Geva of Salt Lake City,” she said. “I founded and led their new-play program, commissioning and developing new works. I was there for four seasons.”

While at Pioneer, Williamson launched the career of playwright Bess Wohl, who was nominated for a Tony Award for her first Broadway production, Grand Horizons.

“I gave her her first professional production as a playwright,” Williamson said.

Next was an eight-year stint at the Hartford Stage in Connecticut. Willamson’s role was all-encompassing.

“I led their new work, new play development as associate artistic director. I produced the season, also directed, translated and adapted work for the stage there,” she said. “That was my home for eight years.”

She dramaturged a number of productions in Hartford and here is where the threads lead to Geva’s fabric for the 2022-23 season.

She dramaturged a number of productions in Hartford and here is where the threads lead to Geva’s fabric for the 2022-23 season.

Two other plays Williamson dramaturged in Hartford made it to Broadway — Robert L. Freedman’s “A Gentleman’s Guide to Love and Murder” (won four Tonys including best musical) and “Anastasia”, which ran for two years on Broadway.

Williamson got increasingly busy doing freelance work and left Hartford to expand that part of her career.

“I was about to move to New York and then something happened,” she explained.

She went back to the family home in Carmel, California.

“All the freelance work I was doing could have been done anywhere, so why not Carmel, where I could walk to the beach, rather than be in an apartment in New York City and being afraid to leave?” she said.

Time passed and in 2021, a search firm called her. Geva was looking for an artistic director.

“I knew about Geva and its commitment to new work and since new work has been the heart of what I’ve done, that was very appealing to me. And as I started to hear more about Rochester, I just fell in love with the city. It’s such a wonderful place,” she said.

“If I could count the number of people who said to me, ‘Well, we moved here 40 years ago and we thought we’d be here just a year or two. And then we never wanted to leave…’ And let me tell you — that’s not something you hear about many cities. It’s really a special place, Rochester,” she added.

Hired at the beginning of the year, she reached back into experience and spread it to Rochester and developed her first season of shows here.

“Geva will be programming a mix of reimagined classics and musicals and new work; all created by some of the most exciting artists working in the field today,” she promised.

“Jane Eyre” was the initial offering for the 2022-23 season, bringing something Williamson had birthed in Hartford to Rochester.

Next was “Somewhere”, a Matthew Lopez play which has Williamson working with that playwright again.

Then came the Geva version of “A Christmas Carol”, directed by Mark Cuddy, with Michael Preston as Scrooge because Guy Paul, a familiar actor to Rochester audiences, was taking a hiatus on the role. The play has been described as a “sparkling classic.”

“Ain’t Misbehavin’: The Fats Waller Musical Show” debuts Jan. 17 and it is going to be special.

“We are co-producing this with the Barrington (Massachusetts) stage,” Williamson said. “When the New York Times saw it they made it a critic’s pick and said, ‘This is how you do a revival.’

“Jeffrey Page, Beyonce’s choreographer and owner of an MTV award, is directing and choreographing. This is a new vision of the show that’s still true to what’s extraordinary about the material while casting a fresh light. It’s a real coup to have Jeffrey here. There’s more dance in this than you would normally expect in a production of ‘Ain’t Misbehavin’,” she said.

More music fills the more intimate Fielding Stage at Geva for Woody Sez: The Life and Music of “Woodie Guthrie”, which runs Feb. 1-19 and features a hootenanny, involving cast members and anyone else who wants to join in, after the Sunday shows. Williamson thinks those Sundays will be fun.

“You get a wonderful intimate feel in that musical,” she said.

Williamson is the first female artistic director at Geva and she landed another coup — the production of Sarah Gancher’s play “Russian Troll Farm: A Workplace Comedy.” It “will mark Geva’s first partnership with a Broadway producer,” Williamson said. “We’re working with director Dori Berinstein and this is the first time Geva has done a pre-Broadway production.”

As she was programming her first season at Geva, Williamson called Berinstein and asked, “Hey, Dori, why don’t we start “Russian Troll Farm” here?”

“I think it’s really an exciting thing for an audience to know they’re seeing something before the rest of the world,” Williamson said, adding that Berinstein is involved in every stage of the play’s development. “Some people will act in it here and follow it to Broadway, that is the goal.”

Then Geva welcomes DeLanna Studi, a Cherokee actor, in “And So We Walked: An Artist’s Journey Along The Trail of Tears”, a one-woman show.

Then Geva welcomes DeLanna Studi, a Cherokee actor, in “And So We Walked: An Artist’s Journey Along The Trail of Tears”, a one-woman show.

On May 9, Geva opens Rodgers and Hammerstein’s “Cinderella.” “It’s a beautiful new production inspired by French fairy tale books from the 19th century, those pop-up books where things come alive,” Williamson said. “I think that will be just magical. The world pops up off the page when you read them.” Shelly Butler will direct.

Geva closes Williamson’s first season with “We Are Continuous” from March 22 to April 9; written by Geva’s playwright in residence, Harrison David Rivers.

In 1972, William Selden and Cynthia Mason Selden founded Geva in space at the Rochester Business Institute on South Clinton Avenue. Ten years later, Geva bought space on Woodbury Avenue and renovation began. A $4.2 million major gift campaign in 1997 led to the purchase of the building and construction. An $11 million renovation followed in 2016 and 14 studio apartments were built for visiting artists.

Geva has a $7 million annual budget, employs 200 people in season and impacts the local economy by at least $10 million. It is supported by 10,000 ticket-holders. Many noted actors, directors, musical directors, designers and stage managers have crossed the stages and 16,000 school kids visit every year.

Now the theater is in the hands of Williamson, who also serves as co-CEO with Chris Manelli.

“It just feels like a wonderful match,” Williamson said. “As soon as I started talking to the board of trustees here, it felt like we had shared interested and goals. They want Geva to be taking its work to a more national and international stage. Some of the artists we have here are eminent in their fields in New York and London. It’ll be really thrilling to get them here to Rochester and have them making work for a Rochester audience and then we’ll be taking that work out into the world.”