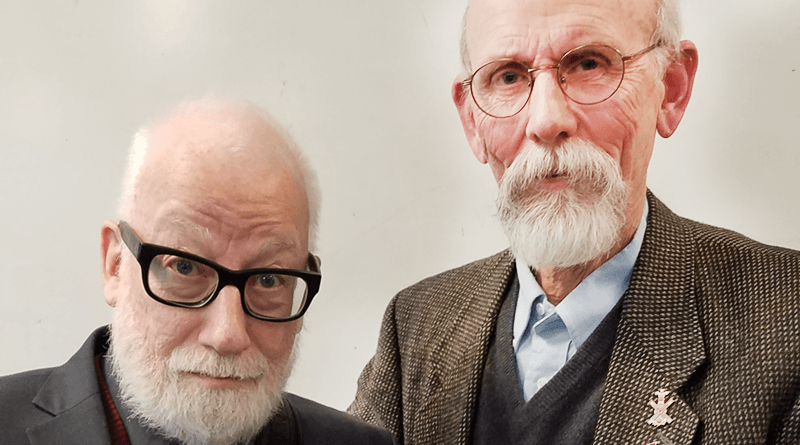 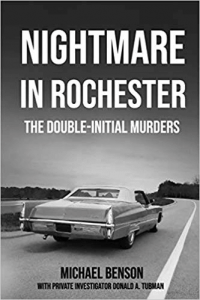 At least not when it comes to unsolved Rochester crimes.

Nightmare isn’t the first case they’ve worked on together. They began their investigative research as a team in 2012 when Benson, a prolific writer with over 60 books to his name, was investigating the 1966 deaths of George Ann Formicola and Kathy Bernhard.

The murdered girls were Benson’s neighbors in Chili where he was living with his family. At the time of their deaths, he was just a little boy. Learning of such a terrible crime made a lasting impression on his psyche.

The horror and mystery haunted him his entire life.

Tubman also grew up in Chili and his gut told him there were more clues out there regarding Formicola and Bernhard. His gut feelings were well honed during his time as a police officer and sergeant with the Wheatland Police for 17 years, a New York state senior criminal investigator for the Office of Professional Discipline for 20, and his current work as a private investigator and criminal defense investigator.

He knew that Benson, a fellow graduate from Wheatland-Chili High School, was a writer and had written true crime. He reached out and offered his expertise. Four years later, in 2016, Rowman and Littlefield published Benson’s “The Devil at Genesee Junction.”

After the release of “The Devil at Genesee Junction,” the team focused its efforts on the Rochester area’s most memorable and horrific crimes — the so-called Double Initial Murders in the 1970s.

Three young girls, each with the same letter of their first and last names, were kidnapped and murdered beginning with Carmen Colon in 1971.

Then came the death of Wanda Walkowicz in 1973, followed by Michelle Maenza later that year. These crimes seared themselves into the collective memories of Rochesterians over the course of the last 48 years.

Benson refers to these series of murders as “community traumas” for all of Rochester just as the Formicola and Bernhard murders were traumatic for him and the entire town of Chili.

“Nightmare in Rochester” is a heavily researched nonfiction account of the crimes written with a deep respect for the victims and their families.

The book — laden with previously unknown facts and interviews with eyewitnesses and family members — has touched a chord in the community and has caught the eye of seasoned homicide investigator Mark Mariano of Spencerport. Mariano retired in 2008 from his position as the commanding officer of the Rochester Police Department’s major crimes unit.

“I read ‘Nightmare in Rochester’ as quickly as I have ever read any book,” said Mariano. “As someone who actually was a member of a task force to solve those murders, I actually learned facts that I had never known. I commented to Michael that the research they conducted and some new information gleaned was absolutely incredible. I was mesmerized by the amount of research they did and wondered what magic they performed to obtain it!”

Mariano added their investigation has revealed there is still some “meat on the bone” to the case and that “the framing of the story they told and bringing it to light again cause people to start thinking and talking. There are some active leads that are going to be followed up on pursuant to their work.”

Investigating and writing a book like “Nightmare” isn’t always easy and Tubman and Benson often came up against dead-end leads, reluctant witnesses, and conflicting stories. It also put them in the company of some shady characters. But trudging through the lurid details and messy evidence was all worth it in the end.

“The woman who was stalked with Wanda Walkowicz told me that I have mended something inside her,” said Benson when asked about the business end of writing and selling a true crime book. “That’s the kind of success you can’t measure in money.”

Benson gave a talk about the book at the Chili library recently, an event that drew 147 people with some turned away.

There were times that afternoon that a quiet, reverent hush fell over the gathered crowd as he spoke about the loss of the three victims. Around the room, people were connecting and remembering the shared sadness and fear that many still carry with them today.

“It’s something I never anticipated that would happen in my life. It’s a good feeling,” Tubman remarked about the impact the book has had on the Rochester community.

Like Benson, he is happy his work has led him to not only new clues but to new people. “You don’t get to know just the bad guys; you also get to know the good people, too,” he said.

Benson and Tubman recruited Deb Sperling, a writer living in Rochester with a background in journalism and a fluency in Spanish, to help interview the family of the first victim, Carmen Colon.

“It never quite hit me how important the work really was until I met with Guillermina and Maria Colon and saw first-hand how deeply Carmen’s loss affected their lives,” Sperling said. “The idea that the families affected by these tragedies could finally, after all these years, get some answers about what happened to their loved ones is what motivates me to do this work. Sure, people love a good story, and that’s important too. But the most important reason to do this work is the possibility of bringing some closure to these families. Even if we never find the killers, I know first-hand that talking about your story and seeing it in print can be a really effective way of processing trauma, and I feel lucky to be a part of that process.”

Even though the book is finished, the investigation is still ongoing. Benson, Tubman, and Sperling are actively pursuing new and old clues. When Tubman gets some new information or a lead that is hot, he calls Benson right away.

“When Don calls hyperventilating, I know it’s really good! He’s emotionally driven to solve this case. That’s something we have in common. We just can’t stand it that these bastards are getting away with this. I don’t worry about Don giving up because he never, ever will.”

Tubman also likes working with Benson, and said, “Michael and I have a chemistry that we can talk and think and figure things out that just aren’t there for others to see. We respect each other, and there is a certain confidence we have in each other.”

Sperling watched Tubman and Benson work tirelessly on this case and is proud to work with them.

“Mike really, really believes in the work that he’s doing. He really wants to see these killers brought to justice and the families find some closure. He has a strong personal connection to the work and it shows,” Sperling said. “He could strike up a conversation with anyone in the world and make them feel like his best friend within minutes. Don is extremely thorough in his research and tends to deal more in cold, hard facts — which is quite counter-intuitive to his quirky personality. They are both a joy to work with.”

In addition to continuing the Double Initials investigation, Benson is also writing a new book about famous mobster Albert Anastasia with co-author Frank Dimatteo. He also regularly appears on television shows such as ABC’s “20/20,” “Murder in the Family” with Geraldo Rivera, “Inside Evil” with Chris Cuomo, “People Magazine Investigates,” “Evil Twins”, and “Evil Kin.”

Tubman keeps busy with his work as a private investigator and a criminal defense investigator for Livingston, Monroe, and Steuben counties.

Together, they are investigating another cold case involving teenagers Jack King and Shari Smoyer. The young couple was shot on a lover’s lane in 1963 in Pittsford.

Learn more about Tubman and Benson’s work at the Gates Library Annual Fundraiser on May 2. News 10 NBC’s Nikki Rudd will moderate Benson’s presentation about the case and book. Learn more at gateslibrary.org. www.gateslibrary.org/news/3rd-annual-fundraiser-save-the-date/

“Nightmare in Rochester” is available at area booksellers as well as on Amazon.