Losing weight: All it takes is a taste of the gym to get a stiff dose of reality

I tried diets. The Atkins Plan helped me drop 30 pounds, but that took a year, and I got it all back and then some.

The South Beach Diet? Loved it, but the pounds came back.

But I have hope.

I have joined a gym.

When we lived in the Albany area, I worked for a company where just about everyone was a runner. So, I took up running — serious running. I got up to six miles a day and I looked like a Roman god — Mercury. I even had a pair of running shoes with little wings on them.

Today, I still look like a Roman god, but this time it’s Bacchus, the god of food, wine and merriment.

So I resolved to do something about it all the merriment. The gym beckoned, and I showed up for the introductory talking-to. 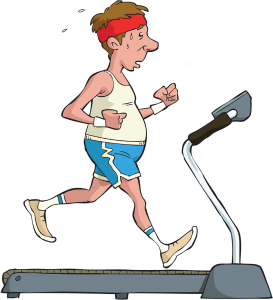 “What are your goals?” the manager asked.

“I beg your pardon?” he asked.

After a bit of explanation the manager understood that I wanted to be sleek and svelte again.

He showed me how to use some of the equipment so I could get a healthy start. But he had other things to do and left me to me own devices pretty quickly. At this stage in my life, standing in a room full of machines that look like they could have been put to good use in the Spanish Inquisition, was a little daunting.

But I dived in.

First, there was the treadmill.

“Does anybody ever get shot off the back of one of these things?” I asked the man next to me. He was about my age and looked like he knew what he was doing.

“It’s been at least a couple of weeks since I saw somebody fall off and get mangled,” he said.

My jaw dropped and my blood pressure tanked.

“Just kidding,” he said. “I think it’s been a year, and come to think of it, we haven’t seen that guy since.”

I decided to try an elliptical machine instead.

I felt like I was stepping over toads in a creek on that thing. I was told it was a machine good for my old knees because it had less impact on them. I wasn’t told that the thing would make me woozy, which it did.

Back to the treadmill, and a rowing machine, and I had a good day.

Weeks passed. I developed a little muscle. I found myself running up stairs occasionally. And I got brave and tried more and more machines.

I saw a TV show on developing muscles for your golf swing, and the next time I went to the gym, I tried that machine and sure enough, I started whaling the golf ball. I couldn’t hit it any straighter, but it was certainly going farther.

Going to the gym when you’re of a certain age takes timing. I’m not talking about making sure the morning prune juice has cleared a path before you venture out, I’m talking about who you’re in the gym with.

If you go very early in the morning, for instance, the gym is filled with young guys and gals who are getting in a little exercise before jumping into their Audis and Volvos and BMWs and heading out for a day of crushing the competition. I didn’t look like anybody in the gym at that time of day, and the same goes for late in the afternoon into the evening.

No, you have to get in there about mid-morning. Then, just about everybody in the gym looks like me — a bit more mature. This is good for your self-image and you don’t have to spend so much time sucking in your gut. At 10 a.m., there are a lot of guts that sag just like mine, many gentlemen of my era who have “furniture disease” — their chests have fallen into their drawers.

There’s a certain friendly camaraderie in the gym when everyone in it is a pensioner or close to it.

I sat down on an ab-crusher machine one morning. A woman who might have been a bit older than I was next to me and she looked like a pretty honest and responsible person with a good heart, so I apologized in advance.

“I’m going to groan and make noises when I use this machine,” I told her.

One of the things they don’t discuss with you at the gym is pain. Instead, they say things like, “take it easy” and “don’t press your limits” and “listen to your body.”

They don’t say, for instance, “Tomorrow you’re going to hurt like hell” or “Make sure you sleep on the side of the bed so your wife can more easily help you out of it the next day” or “When you came here, you didn’t have muscles that could be sprained and strained and hurt — now you do!” or “You think it hurts today? Wait a couple of days more.”

The first time I pressed my limits, I also listened to my body, which at that point was screaming and crying “Uncle!”

Oh yes, sports fans, it is easy to sort of get in the swing of going to the gym and one day watching someone who is in a lot better shape do something, and you say to yourself, ‘I’ve been coming to the gym for three weeks now — I can do that!”

And you surprise yourself and do it. Success!

The next day: reality! You hurt in places you didn’t know you had. Ibuprofen helps, and heat and cold help. Adult amber beverages help. Staying away from the gym for a day or two helps.

Sweet words from your spouse are nice, but they don’t help.

“Take some ibuprofen before you go to the gym today,” my wife warns me. “I don’t want to help you out of bed again tomorrow.”

And I still haven’t lost any weight.