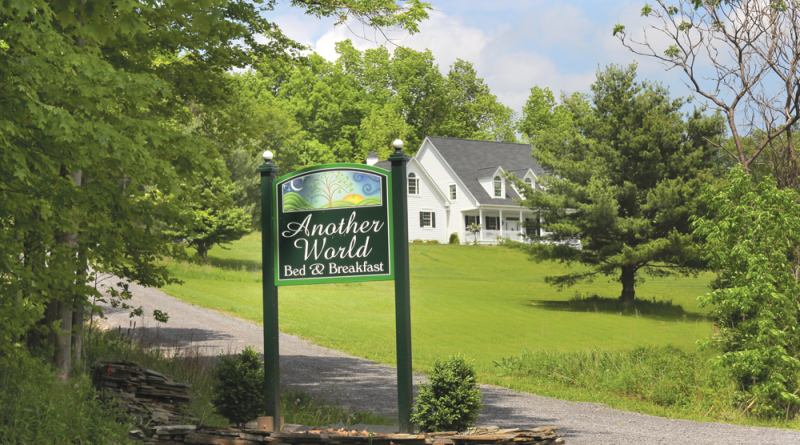 Lynda Draper Nezelek’s life was an ordinary one, until a refrigerator repairman came to her home and released chlorofluorocarbons (CFCs) out into the air. That day changed her life, and set her on a path that not only helped the nation but helped her build Another World Bed & Breakfast in Naples, one of the most eco-friendly inns in the country, according to BBOnline.com.

“I am passionate about creating a healthy environment not just for the inn, but for generations yet to come,” said Nezelek. “I want to make sure we leave the planet at least as good as we found it by doing the right thing.”

Nezelek’s expertise in environmental affairs came after a steady career in advertising and marketing in both the public and private sectors. Although she lived in various cities throughout the country, it was her home in Endicott, Md., when the repair of her refrigerator opened her eyes. The standard practice at that time of releasing CFCs into the air outraged her, and it set her on a path to help change that practice. She reached out to environmental groups who put her in contact with Al Gore, just as CFCs were coming to the forefront of consumer and governmental concern in the 1980s. Thus began her work with a process that eventually changed the way major corporations manage CFC solvents and coolants in their products.

“I have always been interested in energy efficiency, and years ago I got involved in a lot of environmental issues,” said Nezelek. “When I learned that chlorofluorocarbons went up into the atmosphere and destroyed the ozone, I stepped outside of my comfort zone to speak up about it. I even did a press conference with the national press corps.”

Her all-volunteer role in energy efficiency and environmental issues landed her in front of Congress as well as on Good Morning America with Al Gore, and she is noted in his book, “Earth in the Balance: Forging a New Common Purpose.” As a result of that publicity, CFCs were phased out through the country, according to Nezelek.

“They actually capture CFCs now,” said Nezelek. “I’m a lifelong learner, and that work helped me see the importance of this from all sides. It then translated to my house, the B&B.”

Nezelek wanted to build an inn that provided a home-away-from home atmosphere backed by a state-of-the art green design, using only sustainable building materials and cutting-edge green technologies both inside and out. In 2010 that dream came to life. From her expertise working in environmental affairs to Another World reaching five-star excellence in travel reviews, the inn is in a class of its own, offering exceptional eco-friendly comfort that crosses the line from the seen to the unseen.

“What makes Another World so unusual is its appeal to bed and breakfast guests who are looking for ultra-comfort, but they get so much more,” said Bob Nezelek, Lynda’s husband.

Some of the many standard eco-friendly features of the inn include R41 insulation, Anderson 400 windows, low-volume flush toilets and shower-heads, and of course the compact fluorescent and LED lighting. But what makes the home stand apart is its horizontal closed-loop geothermal heating system that uses a non-toxic sugar-based antifreeze, which pulls heat out of the ground in the winter and puts it in the house, and in the summer it takes heat out of the house and dumps it into the ground. This system utilizes nature to provide a consistently comfortable temperature throughout the house year-round.

Efficiency-increasing hot-water holding tanks connected to the geothermal system put already-hot water into the heat-pump water heaters, which use 60 percent less energy than conventional water heaters. Other features include special bathroom and kitchen ventilation controlling the interior moisture load. The home has engineered wood joists that do not require cutting of old-growth timber. Nezelek even has eco-friendly carpet, which uses a renewable-sourced fiber made from corn sugar.

But that isn’t even the half of it. Nezelek’s detergents and cleaning products are all 100 percent naturally derived, along with the bath and body products offered at the inn. Formulated with extracts such as honey, chamomile, and lemongrass, there are no parabens, phthalates, artificial or petroleum-based ingredients. From linens to landscaping, to the rotating, rack-mounted solar panel system currently in the works to become the inn’s sole source of electricity, the green initiatives are abundant.

“It looks like a traditional house, but it’s really, really green,” said Nezelek. “This is my dream house. I made it personal, for me and for the guests.”

Nezelek chose everything for the house down to the tiniest details, from knobs to floors to the shine of the eco-friendly paint. She used paint chips to match her fabrics and her wallpapers, and even her artwork and dishes. Every room is unique, and of course everything used is environmentally sustainable, including the food served at the inn.

“The B&B is a one-of-a-kind, green, custom country property that is just marvelous to live in and to operate as a B&B,” said Bob. “It attracts guests from all over the world.”

Situated on several acres of rolling hillsides, the 4,800-square-foot inn is a cross between a southern country Cape and a New England center-hall colonial. There are four guest rooms accommodating eight guests.

“I tried to make it so it reflects history, and make it homey, so people feel comfortable,” said Nezelek. “A lot of people when they come in ask me if the house is restored. It looks old, historical, it doesn’t look new.”

Decorated in a traditional, early Americana style, the inn is filled with antiques, custom furniture and elegant reproductions that fit in perfectly with the overall charm of the Finger Lakes. It was that charm that drew her to the area to build her special house and inn. Nezelek says she hopes to continue to spread the importance of environmental safety beyond the local community.

“I’m quite focused on protecting our environment while living comfortably. I guess you could say I’m high energy and I’m also energy efficient,” said Nezelek. “The house is an amazing place, but taking care of the planet is a team effort.”