Closet organizing puts many a man to the test 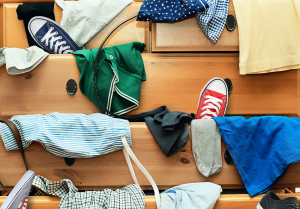 My college education ruined me as a husband. I know this because I had a flashback while reading an article for a closet-organizer system.

The article was aimed at parents whose kids were about to start college and, therefore, would be living in a dorm for the first year of school. The article pointed out that this particular organizer would keep the closet neat and tidy, and it could be set up in 30 minutes or less in a standard college-dorm closet.

Thirty minutes or less on the first day a kid is in his dorm room, on moving-in day. Yeah, right.

Dad is going to unload the organizer, get out his tools, assemble the organizer and insert it in the closet while the child is moving into the room, meeting new friends, excitedly and nervously exploring, with a doting mother helping to unpack and arrange everything — in 30 minutes.

And the new college kid is hoping people don’t come into the room and get a first impression of the family by checking out Dad’s butt-crack as he crawls around in the closet on his hands and knees.

For Dad, the construction of the closet organizer is an important ritual, perhaps the last thing he can do for a child whom he will leave at the college. The next time he sees that son or daughter, he or she will have immeasurably changed.

All dads know this, of course, and most dads are prepared enough that not only have they packed all the tools to put the organizer together, they also have a roll of paper towels for the moment on the drive home where they have to pull off the road and have a good, cleansing cry.

Been there, done that.

I did not have an option for a closet organizer when I went to college. I didn’t have a lot of clothes or a lot of shoes or a lot of stuff. In those days — and I was in school when John F. Kennedy and Lyndon Johnson were presidents — if you had a small TV in your room, you were a rich kid. We did have record players. No laptops — those were more than 30 years away. You did a term paper on a typewriter, and when I started school, submitting handwritten term papers was acceptable. No CDs. Eight-track tapes were around, and cassette tapes were just becoming available. No iPods. No DVDs. VHS tapes hadn’t happened yet.

In the years before college, my closet organizer was my mom. Dirty clothes would go into the hamper, and clean clothes would appear a week later in my closet or drawers, neatly arranged. It was a perfectly fine system.

But in college, I had to learn to use a washer and dryer, and when the college laundry raised its prices on pressing shirts, I had to learn how to iron. In fact, the laundry room was the place to be on a Sunday morning or after midnight on almost any night of the week, because so many guys were doing their ironing. As I recall, the quarterback of our football team was particularly deft with a Westinghouse steam iron.

My senior roommate, Ira, was good at ironing. In fact, he was good at everything; I was messy. I drove him crazy. I was up all hours of the night. I drove him crazy. I told him late at night, when the lights were off and we talked about life, that his big plant — a gift from his girlfriend, Joanie — was waiting on the windowsill to attack him as soon as he fell asleep. Then I’d nudge the bottom of the plant with my foot — which he couldn’t see in the dark.

The plant would move.

I drove him crazy.

When the time came to leave college and go home for the summer, my drawers were full of clean clothes, and there were clean things hanging neatly in the closet, but the floor in the closet was full of everything else we’d collected through the year.

I’ve been wearing the same couple of pairs of shorts all summer. I told my wife, Gayle, I was going to buy some new shorts.

I paused. “I’m going to get some new sandals, too.”

“No you’re not,” she told me. “Not until you get rid of some of the stuff you have in the bottom of the closet.”

She held up green-and-black running shoes that were falling apart.

“They are starting to grow their own crop,” she said.

She held up two pairs of my nursing shoes.

“You’re not nursing anymore,” she said. “Do something with them.”

She held up three pairs of decrepit sandals.

“I wear them every once in a while,” I explained.

“Deal with them,” she said.

Then she held up a pair of sandals I hadn’t worn yet. And a pair of shoes I hadn’t taken out of the box. And golf shoes (I’ve played golf twice in the last 40 years). And she was only halfway through the closet.

“For special occasions,” I explained.

She was wiping dust off the shoes.

“You’re driving me crazy,” she said.

I learned it in college.