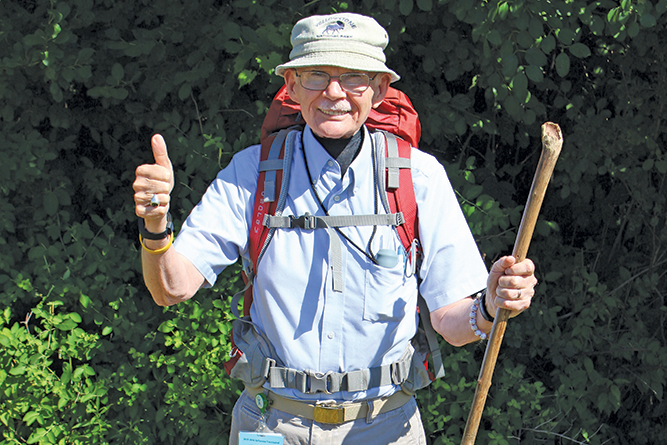 500-mile walk in Europe to raise funds for Lifetime Care

Herb Tierney walks because he’s grateful. He walks because his life could have ended more than a decade ago. Finally, he walks for the many others who can’t.

In September, Tierney, 70, of Rochester, will undertake a 500-mile trek across France and Spain to raise money for Lifetime Care’s hospice program. For 33 days, he plans to cover 15 miles a day. Known as the Camino de Santiago, Tierney calls the journey a celebration of life and good health care.

“Life has been interesting and has taken me through a lot, but I’m so thankful to still be alive and able to help others,” said Tierney.

For 20 years, he has worked at Lifetime Care, an organization serving 33,000 home care and hospice patients per year in the Rochester and Finger Lakes region, including the counties of Monroe, Wayne, Seneca, Cayuga, Yates, Schuyler, Ontario and Livingston. Its focus is on the delivery of compassionate, personalized care to adults and children who are ill, injured, dying or grieving.

“Taking care of people in the healthcare field is something that I have been passionate about,” said Tierney. “There are a lot of things that have happened in my life. It’s tough to know even where to start.”

The beginning might lie someplace in 2001 when he had a biopsy done on his larynx, also known as the voice box. Soon he was diagnosed with an aggressive form of cancer so his larynx was removed, affecting his speech.

“Lifetime Care took care of me. They made sure my needs were met,” said Tierney. “They treated me like family and that helped with my recovery. We are a close-knit community here and I don’t know what I would do without that support.”

He had to give up patient care after a total laryngectomy in 2003, and now works in administration at Lifetime Care. He knew that he could still do so much to help others in need.

“I have worked with Herb Tierney for over 20 years and consider him to be not only a colleague, but also a good friend,” said Priscilla Lynn, hospice supervisor nurse for Lifetime Care. “When he was involved in direct patient care, Herb believed in and practiced a holistic approach to the comfort and well being of our hospice patients and their caregivers. Despite the challenges with his own health that he has faced and overcome, he has remained dedicated to the Lifetime Care organization and the hospice program. I have learned a lot from Herb and wish him a safe and successful journey.”

Known primarily as a Christian pilgrimage for the past 1,100 years, Tierney’s European quest predates Christianity. It was previously known as “Via Compostella to Finisterre,” loosely translated as walk to the ends of the earth under the Milky Way.

He has been training for the walk as a fundraiser for Lifetime Care, walking six to 15 miles a day with a backpack. He walks to prove that those who survive a scary healthcare diagnosis can continue to thrive beyond recovery and for those who fell short of the journey.

“I want to walk for all the cancer survivors and I want to walk for those who tried hard and didn’t make it,” said Tierney. “If I can raise money for the hospice and help anyone, then I will. I also want to show that even as we get older, we can accomplish the opposite of what people think we can do. We can continue to live our lives and do incredible and physical things and it’s a great way for older people to stay active and engaged in life.”

After 13 years living cancer-free and two decades as a Lifetime Care hospice nurse, the walk from the town of St. Jean Pied au Port in France across the Pyrenees Mountains and into Spain provides a backdrop to an interesting and grateful life.

“I would like to give back in the form of dollars some of the love I have received from this company,” Tierney said about his fundraising effort. “Accomplishing this will also help me set even greater goals for my future.”

Although his 35th wedding anniversary with his wife, Liz, takes place during the pilgrimage, he will not be alone, walking instead with his friend David.

He hopes other employees across the organization and the community will support the fundraiser by clicking on “Herb’s Walk” at Lifetimecare.org. All donations will go directly to Lifetime Care Hospice.