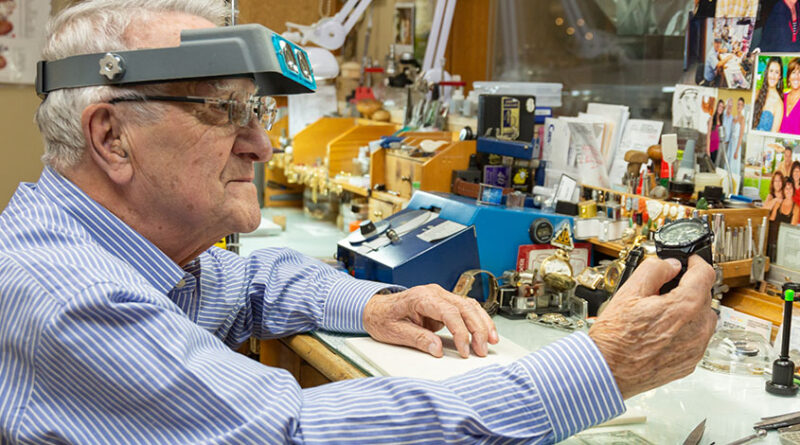 As a child growing up in Guardia Lombardi, Italy, Gerardo “Jerry” Magnotta spent hours watching his father and grandfather turn broken pocket watches and clocks back into reliable, handsome timepieces.

Huddled over their workbench, surrounded by tiny wheels, screws, springs and miniature tools, the two worked their magic.

Jerry Magnotta would watch — never touch — and ask questions. Lots of them.

“They were really into giving me answers,” said Magnotta. “And it stuck.”

In February, the founder, heartbeat and soul of Jerry’s Jewelers in Irondequoit will celebrate 60 years of doing what he loves: caring for customers, working alongside family and restoring cherished timepieces and fine jewelry to their original glory. That passion now spans more than four generations and includes multiple family members.

“When you do this, how can you not be satisfied?” asked Magnotta. “Every day there is a problem, and I identify the problem and fix it.”

Equal parts detective, diagnostician, surgeon and artisan, Magnotta has to “be sure and do it right, otherwise you fix something that is not broken,” he said. That could lead to “loss of time, loss of income and loss of face.”

Sitting at his workbench just inside his 1368 East Ridge Road store, Magnotta’s focus is intense and distraction-free, his movements ultra-steady and precise.

No doubt that’s why he’s at his bench almost every day the store is open.

“It’s an ingrained habit for me and I cannot miss it,” said Magnotta. “I enjoy walking into a business I started from the ground up. I enjoy the work and the challenge every day, whether it’s gold repair, batteries or watch repair. Making a customer happy puts a smile on my face.”

“I enjoy walking into a business I started from the ground up. I enjoy the work and the challenge every day, whether it’s gold repair, batteries or watch repair. Making a customer happy puts a smile on my face.”

And it doesn’t hurt that every day is a virtual family reunion. His son, Frank, is a key player in the business, with other relatives rounding out the team.

“I have always worked with my family,” said Magnotta. “Watching my grandfather and father at the workbench gave me inspiration. And now, working with my son is a pleasure. We have a close bond that is, in part, due to this business.”

Magnotta’s nephew, Leon, has also been an integral part of the business for more than 25 years. And a granddaughter jumps in when she isn’t at school.

“It keeps us close, he said. “There’s a level of trust and loyalty that is hard to come by in a big box store. Employees come and go and there are times when you question motives. That isn’t the case when you work with your loved ones, at least not in our case.”

Yes, there are times when disagreements arise about day-to-day operations.

“I may have a more ‘antique’ way of doing things,” said Magnotta. “The younger generation has a different approach. Compromise has to happen.”

But how has this family business managed to thrive for decades when so many don’t?

“They send their family members, and over time we’ve assisted in the selection of gifts for multiple generations,” he said. “The community has trusted us due to our honesty and willingness to go above and beyond.”

Still, much has changed for small businesses since 1962.

“When I started here in the U.S., there were few, if any, big box department stores that carried fine jewelry,” said Magnotta. “Online sales have also had an impact. But being a small business lets us work with customers at many levels, from batteries to jewelry pieces, as well as diamond engagement rings. The consultation is key.”

The latest shift in fine jewelry has been lab grown diamonds, Magnotta said. They have the same properties as the earth-mined, but give the consumer an alternative lower price point with the same benefits.

“We’ve seen them take hold in the last few years especially, and we’re proud to offer them to our clients,” he said. “They’re here to stay.”

“There has to be a willingness to work together and work through differences,” he said. “There is a commitment that needs to be understood. My son, Frank, invested many hours to become a gemologist after finishing his business degree from St. John Fisher College. I know that the business I began is in good hands.”

“You cannot satisfy everybody all the time,” said Magnotta. “But I try hard, and when I try, I am satisfied for myself that I know I try to do the best way I can. It’s not ‘the Mr. Dollar’ that makes the world go around.”

“My dad inspires me in so many ways,” said Frank Magnotta. “When you look up ‘The American Dream’ in the dictionary, you’ll see my dad’s picture. He was a young man with limited English, plenty of determination and a skill set to create a business that’s still operating 60 years later — that’s quite an achievement. Add to that the fact that he’s still going strong at 84 years young. We’re blessed to have that type of daily motivation.” 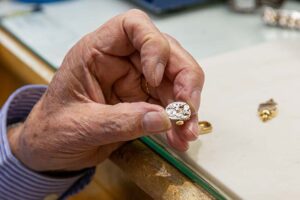 What keeps the master jeweler and watch repair specialist smiling after 60 years on the job?

“Being knowledgeable and giving customers the best advice I can to meet their needs gives me pride,” Jerry said. “Being with my family on a daily basis and seeing my son and family taking the business to the next step brings me a lot of satisfaction, as well.

“I don’t think I could have done better or been satisfied more with what I did,” he said. “It is very rewarding.”

For more than a century, four generations of Magnottas have designed, provided and repaired fine jewelry, diamonds and watches. Gerardo (Jerry) Magnotta has been at his bench for more than 50 years, first learning the craft from his father and grandfather in Guardia Lombardi, Italy. At age 18, Jerry relocated to Caracas, Venezuela, to run a store with his father. In 1962, he traveled to the U.S., met and married his wife and launched his own store, Jerry’s Jewelers, in Rochester. In due time, Jerry’s son, Frank joined the family business after completing the GIA graduate gemologist program. Find Jerry’s Jewelers at 1368 E. Ridge Road in Rochester Tuesdays through Fridays from 10 a.m. to 5:30 p.m., and Saturdays from 10 a.m. to 3 p.m. To schedule a private appointment, call 585-544-2090.

Featured Image: Sitting at his workbench just inside his 1368 East Ridge Road store, Jerry Magnotta’s focus is intense and distraction-free, his movements ultra-steady and precise.