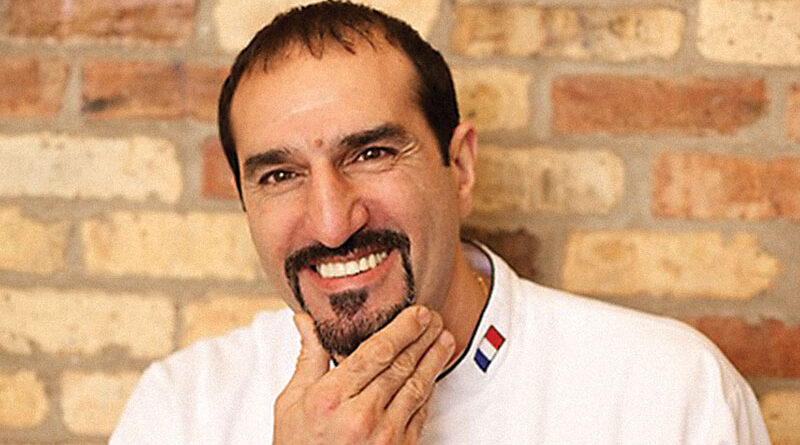 …and a few points in between

Where can you find dishes and desserts prepared by a renowned award-winning French-born chef?

In Spencerport, at Mangia Mangia. That’s where head chef Gerard Jamgotchian heads up a team of eight cooks working to make your dining experience a measurable and delectable one.

You can even pick which meal of the day you like best since Mangia Mangia makes all three. Just don’t skip dessert because it’s one of Jamgotchian’s specialties.

Since cakes are a staple of American desserts, he makes plenty of them: cheese cake, rum cake, carrot cake along with baklava, crème brulee, fruit tarts, chocolate mousse, tiramisu and French custards.

He started making pastries at a friend’s family business as a teenager in Marseilles long before he attained the title of master chef.

“Growing up in Marseilles, my grandmother would spend an entire day cooking everything from traditional Armenian farm to classical French cuisine,” he recalled. His love and fascination with her cooking helped him decide what to do in life.

Lower fat and fewer calories isn’t something the French would necessarily want or understand but for calorie-counting Rochestarians, Jamgotchian is making dairy-free pastries, lighter sauces and lighter fare, too.

A lighter cost than Chicago, New York City and Boston is something diners want to be served here as well.

Jamgotchian arises happily at 5:30 a.m. to get to his “playground” at Mangia Mangia from his home in Irondequoit.

Jamgotchian, 63, said he was attracted by the America he saw portrayed in Hollywood movies along with the freedom, wide open spaces and business opportunities.

His love of cooking and pastry made him abandon early plans to be a rock ‘n’ roll star, an optician or a jeweler with his family’s business.

At the age of 22, he arrived in the U.S. at a far easier time to immigrate but without the ability to speak English. Since he had some contacts here, Rochester was his first stop in the early 1980s, but since the Flower City isn’t often portrayed in cinema, California was his ultimate destination.

“I came here on a tourist visa then got my green card,” he explained. “It was easier to do back then.” He offered to work at a bakery in Bushnell’s Basin for free but soon achieved paid employee status due to his pastry-making acumen.

One thing he couldn’t bear to part with in France was the 1956 Citroen he restored as a kid from nuts to bolts. The Citroen has a place in French history. Prime Minister Charles de Gaulle used one as did the French resistance in World War II.

“It was one of the last to come out of the factory in 1956 before they stopped making them,” he said. It cost him $1,500 to have it shipped to Port Elizabeth, New Jersey. The shipment cost was nothing compared to the difficulties he had getting it out of customs, he said.

The classic car also gave Jamgotchian the means to get to sunny alluring California.

“Back then, I didn’t realize how big the country is. I’m glad I did it because I couldn’t do it now,” he said.

He still has the classic white Citroen to drive on days off and even took the writer and his wife out for a thrilling spin along the lake for this story.

After California, the chef’s cooking trail led to a dozen or so years in Florida, including St. Augustine and Tampa Bay, where he became one of the most notable and sought-after chefs in a city with a large French Canadian population. He opened his own thriving restaurant in Tampa, but had to sell it in 2016.

The sunny humid heat of Florida may be welcome to many, but for his wife, Ann-Marie, excessive heat and humidity made her ill. In 2016, his trail led him back to Rochester, where his U.S. adventure started.

Jamgotchian’s numerous awards and certifications include the titles of certified executive chef and certified pastry chef from the American Culinary Federation in St. Augustine. He’s had television cooking shows and taught cooking through the years at places like Tops Cooking School and other schools whenever possible so others can share his love of cooking and pastries.

Fame and recognition are of no great importance for the chef these days. “I’ve done pretty much everything I set out to do,” he said.

It remains his desire to serve you a delicious meal and dessert prepared as only Chef Jamgotchian knows how.