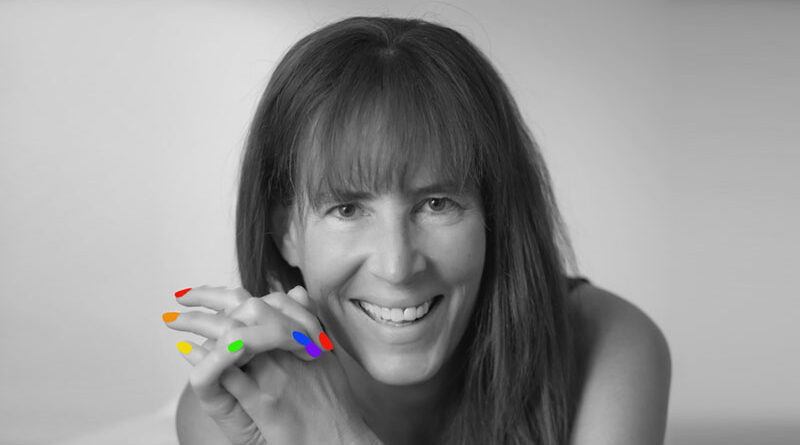 In a new book, Jeannie Gainsburg of Pittsford addresses common questions about the LGBTQ+ community, current appropriate vocabulary, tools for advocacy and much more

Shortly after her 40th birthday, Jeannie Gainsburg of Pittsford read a book about women’s suffrage. She allowed herself a moment to daydream about being back in time, side by side with Susan B. Anthony as they fought together for equal rights.

“Suddenly hit me what a hypocrite I was being!”

“‘There are all these civil rights fights going on right now in your lifetime [and] you haven’t done anything about it,’” she recalls telling herself.

Gainsburg realized that the fight for social justice in Rochester and the wider world was not over by a long shot.

It was time to stop daydreaming and take action. The next day she called the Gay Alliance — today known as the Out Alliance — in Rochester and asked if she could volunteer.

Seventeen years have come and gone and Gainsburg has become a trusted and admired ally of the LGBTQ+ in Rochester and beyond.

Gainsburg started volunteering at Out Alliance immediately. Then, after a couple of years, she was hired as a staff member. She stayed with them for 15 years and she spent the last five as the education director.

In March last year, Gainsburg released her book, “The Savvy Ally: A Guide for Becoming a Skilled LGBTQ+ Advocate” (Rowman & Littlefield 2020). The book is a must read for anyone wishing to support the LGBTQ+ community. It’s a smart, motivating and practical guide to being an ally.

She addresses common questions about the LGBTQ+ community, current appropriate vocabulary, tools for advocacy and much more. It’s been said that authors must write the book they themselves wish to read, and Gainsburg wished she had a book like hers when she started on her path as an ally.

“I wanted a guidebook,” said Gainsburg. “I wanted someone to hand me a guidebook that said, here’s how you know what to say and what not to say and how to not mess up. I was so scared that I was going to offend someone accidentally, because I didn’t know the correct terms.”

But years of advocacy has taught her that all humans make mistakes, herself included.

“I am constantly learning; I am constantly making mistakes just like everybody else and figuring out how to move forward and get it right next time.”

Anne Wakefield met Gainsburg a decade ago at Out Alliance. She wrote grants for them, then later served as the organization’s interim executive director. Today she is the chief operating officer for a small company in the area. Reading Gainsburg’s book helped her embrace the idea that no one has to be perfect to be an ally for social justice.

“What really resonated with me was the fact that we don’t have to be perfect. It’s the idea of the effort, and the trying and being respectful that makes a difference to the community. And I, as a member of the community, I would agree with that.”

Throughout the book, Gainsburg reinforces the notion of “assumption of good intent,” meaning that learning can happen in those spaces of mistakes. If a person makes a mistake with gender terms, for example, it is conducive to growth and connection if there is always the assumption that the person was trying their best to do and say the right thing.

Scott Fearing also met Gainsburg at Out Alliance when he worked there as education director. Today he is manager of diversity education at the University of Rochester. He was impressed by Gainsburg’s thoughtful and thorough book since he believes that allies are important to all communities.

“I understood the power of allies. And I’ve always tried to tell my fellow LGBTQ+ community members that we need to embrace and welcome our allies,” he said.

He said that Gainsburg’s book does a great job of outlining what allyship is and isn’t. It isn’t speaking for a marginalized group. It’s about supporting the community and educating others.

“There are times and places where we can’t speak for other groups that we’re not part of. And she got that. But there are also times and places where we have to speak to our peers. So, I’ve got to speak to other white men when I hear them say racist, sexist, ageist things, right? I need to speak up to them and say, ‘You know, I really don’t find that funny,’ or ‘Why is that funny to you?’”

Gainsburg also facilitates workshops and said that she focuses on allyship and ally education in her sessions since she herself is not a part of the LGBTQ+ community.

“I think there’s some real value in allies talking to allies and supporting each other, and again that gets down to that, ‘I’m scared to death I’m gonna make a mistake,’ and sometimes if there’s a community member in the room, [attendees] are less likely to talk because they’re so embarrassed about their question possibly being an ignorant question.”

Gainsburg said that “The Savvy Ally” is a book with a rather wide audience, but that in many ways particularly appeals to those in the 55-plus community. She remarked that in many cases people over 50 never even heard the word “gay” during their school years and thus never received any education about the LGBTQ+ community.

“How are we expected to know the correct language when we never got that education? And so I think mostly what I’m seeing is curiosity. A lot of folks saying, ‘This affects me. I have a gay child,’ or ‘my grandchild came out as trans.’ And really, mostly people want to do the right thing and again are really scared of using very outdated language. They just kind of need the tools to know how to be respectful.”

Fearing, the manager of diversity education at UofR, found the book, “fun, it’s approachable” with a glossary, personal anecdotes, and quick quizzes. “Yet at the same time,” he said, “there is that element of scholarly wisdom that goes with it. She created something that I never would have had the skills to do. And did it in a way that is just so astonishing.”

Wakefield loved hearing her friend’s true voice come to life on every page.

“So much of Jeannie’s personality was coming through as I was reading it,” said Wakefield. “To me it was kind of a love letter to the community.”

Photo: Jeannie Gainsburg of Pittsford worked for more than 15 years at Gay Alliance — today known as the Out Alliance. Last year, she published a book about the LGBTQ+ in Rochester and beyond.