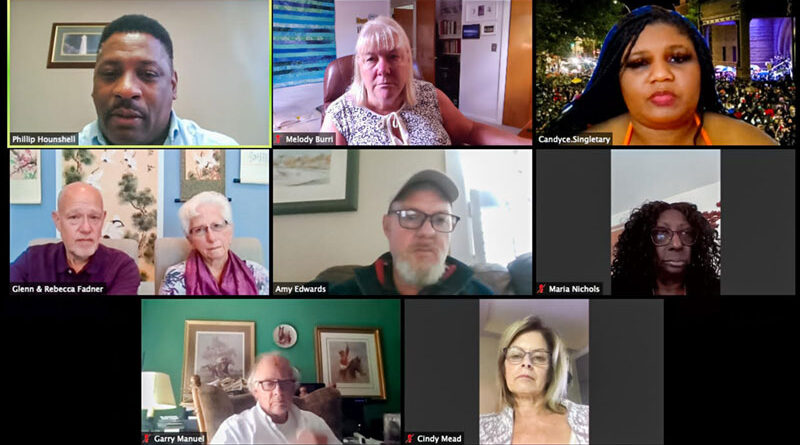 As demonstrators ramp up locally and across the nation in protest of racial inequality and police violence, hope for a lasting resolution might seem further out of reach than ever.

But for members of Rochester-based nonprofit Project URGE, Inc. it’s not. They believe meaningful solutions can and must be crafted through open dialogue, education and social action.

“The racial divide is real,” said Project URGE board member Rev. Phillip Hounshell. “It’s a part of the fabric of the United States for people of color. And we’ve felt it all along — we always feel it. Because you can’t hide your color. Wherever you go, you’re going to experience some kind of angst. You’re always walking with some kind of anxiety about whether you’re being judged, or fitting in, or getting a fair shake.”

“The political turmoil and the divisiveness we’re experiencing also happen to be shaded by race,” said Manuel. “And the COVID-19 crisis has once again affected people along the poverty line greater than others. Typically when that happens and people are hurting, the violence goes up — and along with it, the arrests.”

Recent shootings and the passing of Ruth Bader Ginsburg, he said, will likely thrust the nation right back into the heat of the mid-1960s.

“Before it was just lying dormant and people were willing to go through life the way they are,” said Hounshell of increasing racial backlash. “But now it’s bubbled up and we’re forced to deal with it. The hope is there will be resolution, that things will get better. But not without a fight. Not without decent conversation.”

That’s why Diversity Café, a monthly online discussion/action group hosted by Project URGE, is a critical tool for those directly impacted by poverty and racism — and for those suburban outliers who feel completely insulated and detached from the issues.

Diversity Café, on the third Saturday of each month from 11 a.m. to 12 noon, brings people of differing races, cultures, economic backgrounds and faith affiliations virtually together on Zoom for candid discussions on systemic racism, poverty and inequality.

“They don’t see that there are inequalities,” he said. “They believe the world is good and everybody has the same opportunities. They’ve been conditioned all their life to believe that.”

But the country was built on racism, on white supremacy, he said. And that’s been the foundation for generations of structural racism, of institutionalized racism.

Others may agree that oppression and inequities exist, but still don’t feel any need to become involved.

“If they’re not the perpetrator of the injustices going on,” he said, “they don’t really believe they have to do anything about it.”

Singletary emphasizes the need for all to acknowledge the reality of racial injustice and speak out against it.

“Not talking about racism doesn’t stop racism,” said Singletary. “It doesn’t negate the fact that it exists or will continue to exist. It’s happening whether you talk about it or not. The question is, how can we help?”

Unfortunately, she said, people have a tendency to remain silent because it’s an uncomfortable conversation.

“They’re more comfortable not engaging because of what could happen, so they don’t say anything,” said Singletary. “But we have to get out of the place where comfort trumps integrity, where comfort trumps character or moral obligations. Just being quiet and standing back makes you complicit, because by not saying anything or taking a stand, you’re telling the world it’s OK for racism to continue.”

So instead of holding fast to differing opinions and just walking away, it’s the responsibility of people of faith to speak up on the behalf of others, Hounshell said.

“Sometimes loving someone means challenging them beyond the area of their current belief,” said Hounshell. “Am I willing to stand up, to enter into other people’s lives even if they don’t have my same beliefs or don’t look like me or walk like me? Do I want the best for them?”

The fight for equality and justice is not a new one, said Singletary, and it’s especially not new in 2020.

“People say the system is broken, but it’s not,” she said. “It was created this way from the start and it’s running the way it was intended to run.”

“It’s a cycle that we can’t break alone,” said Singletary. “It cannot be toppled without help. We need our white allies. They’re on the boards and panels that can influence. They have the voice to make things happen, and they’re the ones who need to find bravery within their circles.”

“This is something I need to confront for myself, for my God and for my community,” he said. “What’s happening now in Rochester is an affront to God and to our society. This is not for the faint of heart. It’s not a love fest. I wish it was easier. We have to be intent and believe this is something God is telling us to do. I’m astonished that we can acknowledge that this is a huge issue in our country and yet continually go about our business as if it’s nothing.”

“People talk a lot about Black on Black crime, but you don’t often hear about white on white crime, Asian on Asian crime,” said Singletary. “The fact is, people commit crimes against the people who are near them. We are overpoliced in Rochester, but the police can’t fix the causes of crime. They can’t fix that people are impoverished, that there’s not a livable wage, that the head of a single family household has to work two or three jobs — these are not issues that are fixable by police.”

“The shootings and killings in Rochester and across the nation are a result of this imbalance, of impoverished neighborhoods, of the inequity of how we live as people of color, said Singletary.

“Those are the things we have to solve,” she said. “And we need to love each other enough to help lift each other up.”

When it comes to finding solutions, Hounshell said “you can only play the role you’re called to play, so just make yourself available.”

He said people often ask themselves: Who am I to try to reach out into our community? What do I have to bring to the table? What am I going to do to make a real change?

“I don’t always feel that I have the tools or resources,” Hounshell said. “But I do have that drive that God puts in my spirit that says ‘just step out and I’ll do the rest.’”

It’s not your ability that counts. It’s your availability he said.

It’s that kind of thinking that drives Hounshell to partner with other Rochester clergy in MCATCP — Monroe County Alliance for Transformation of Community and Police. For months the group has held public forums to “try to have more of an advocacy with law enforcement to work through a process of change,” said Hounshell.

Manuel expressed concern at the weight and fatigue of confronting racism head on and working together for change.

“We’re entering a climate of such turmoil,” he said. “It’s lonely when you’re trying to fight this mentality. Sharing together will make us stronger than if we just stayed in our houses and had our own opinions. But I don’t think we can continue in isolation — we won’t survive. We need to be fortified. We have to inspire each other and keep everyone engaged.”

There’s so much work to do, so many injustices to address, so much change that’s needed on a grand scale and on a personal level. It can be overwhelming, agreed Hounshell.

And when you pile the COVID-19 pandemic on top of the generations-old cycle of systemic racism, “people all over are feeling anxiety, a state of depression because they don’t want to continue to go through this same cycle any more,” said Hounshell.

So how should people try to encourage others to stay the course and not lose hope? How do they keep standing strong and standing up for justice and equality?

“We need a sense of self,” said Hounshell. “I’m not God and I was not called to be God. God has called me to be a voice for him at this point in time. It’s up to him to make change. So get alone and pray. Take the time to refresh yourself.

“And if we can get to the point where I can see your value and you can see mine, we can get above this,” he said. “Love your neighbor. Equality for all. One body, one nation. If we can get to that point we’ll move the needle a little bit further.”

If and when that happens, “it’s going to be good for everyone,” said Manuel.

To join the conversation, email prourgephounshell@gmail.com.