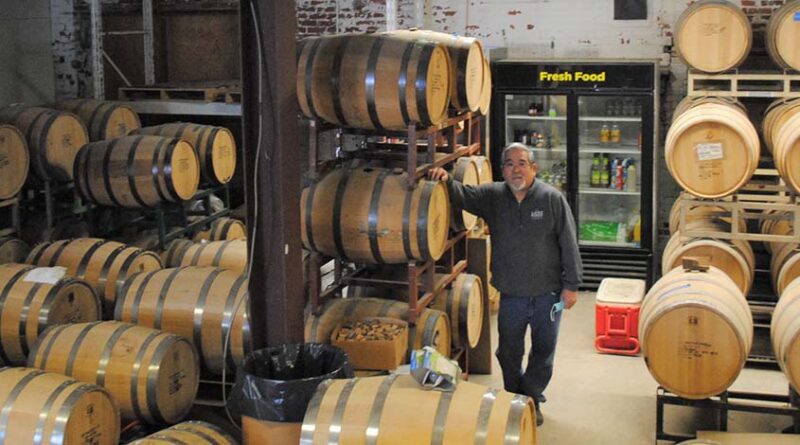 Chris Uyehara is a chef, baker and college instructor. Since late last year he is also a master distiller, having won a Discovery Channel whiskey competition

Quality is the first ingredient.

It’s a phrase that Chris Uyehara learned from his father, James Uyehara, a baker in Honolulu, and it’s been a phrase that he has adopted to all the various aspects of his culinary career, which has spanned more than four decades.

The 65-year-old Skaneateles resident is a chef, baker, college instructor, an award-winning ice carver and now a top distiller.

He was named as Discovery Channel’s “master distiller” on its “Moonshiners: Master Distiller” “World War of Whiskey” episode, which aired in November.

Uyehara is the co-owner and distiller at the Last Shot Distillery, with fellow Skaneateles resident John Menapace.

He began the business in 2015, because, he said, he wanted to have something when he finally decides to retire from teaching culinary classes at the Falk College at Syracuse University.

“I wanted something for retirement, where I could step out of the university and retire and do this full-time for the rest of my life,” he said.

Describing it as a passion and a hobby for him, Uyehara said, the operation has “grown way bigger than a hobby.”

He distributes to various liquor stores in the Central New York area, as well as in New York City and Sussex County. Arsenal Wine and Liquor in Watertown also handles shipping product for Uyehara. He plans on expanding into an adjacent space, which would increase the footprint to 6,000 square feet. His master distiller distinction has also increased his business.

Uyehara said that this passion of his is part of his DNA. About three years ago, while on the phone with his sister, he learned that his grandmother, Yoshi, used to make moonshine in Hawaii.

According to Uyehara, his grandfather, Taro, was one of the men brought from Okinawa to Hawaii as an indentured worker on the sugar plantations there. He would eventually marry Yoshi, also from Okinawa. Yoshi would join her husband and start their family. One evening, Taro and some of his fellow workers were relaxing with some of Yoshi’s shine. A plantation supervisor came by and asked what they were drinking. Taro offered him a drink, and he was so impressed, he inquired about getting some on a regular basis. Taro said that they could provide the moonshine, if the supervisor promised to leave Taro and his friends alone in the fields.

Years later, Uyehara’s father would come to own a bakery in Honolulu, with the family, including Yoshi, living behind the store. Chris Uyehara and his siblings would spend a lot of younger years in the bakery. It was here where Uyehara learned his culinary skills — baking from his dad, cooking from Yoshi.

Both were sticklers for quality, he said. He learned that being consistent in quality control was key. And when he became a chef, he said, “That’s what got me on the map.”

Over the years, Uyehara has worked at various restaurants, including Patisserie and Rosalie’s Cucina in Skaneateles and Savannah Dhu, a 3,900-acre retreat created by the late shopping mall developer Robert Congel.

While working at the latter, he had been mentoring a new chef, whose father made apple brandy and Uyehara had the opportunity to check out his distillery.

From there, Uyehara started researching on Google, reading books and taking workshops with Cornell Cooperative Extension.

“When I started this, I wanted to go traditional, old-school — just a straight whiskey, straight moonshine, good vodka, a good bourbon,” he said.

When asked about how he develops his creations, Uyehara said, “I just targeted whiskeys that are known for top quality,” and researches it. Books would give a hint of as to the recipes, but the wheat strain is under lock and key, he said.

With that quest for quality rooted in Uyehara, he said he buys his grain a month at a time so it’s fresh. Once it gets ground, the flavor starts going downhill.

“I want mine fresh as possible,” he said.

In doing the Moonshiners’ World War of Whiskey, he did a Japanese-style whiskey because of his heritage. One of his competitors, Lorna Conrad, who is part Scottish, did a Scotch-style whiskey. Ironically, a book on Conrad’s company was the first one Uyehara bought when starting his research into the industry. And now he was competing against her.

When he was on the show, he put a photo of his grandparents at the plantation house in Hawaii on the still and said, “Grandma, I’m dedicating this competition to you.” Once he was given the honor, he told the judges and the TV audience, “I think she’s dancing in heaven.”

He’s also planning to dedicate a new bottle of liquor in honor of his grandmother, called “Yoshi’s Pineapple Sugar Shine.” He’s got the label set, featuring a photo of Yoshi. But he hasn’t perfected the recipe yet. He said he’s made a batch, and while it was good, he wasn’t completely satisfied. So he’s waiting on new ingredients.

Again, that attention to detail and quality.

But how did this Hawaiian native end up in Central New York?

He met his wife, Kelly, while she was studying and teaching in Honolulu.

Eventually, in1990, the two would come to Central New York, which is where his wife is from.

While the cost of living is cheaper here than in Hawaii, Uyehara has joked that if he’d known how to get to the airport back then, he would have gone back home.

It appears that Uyehara has become somewhat acclimated to the cold over the years.

About 15 years ago, fellow chef, Stan Kolonko, who also owns an ice carving business, had suffered an injury and asked Uyehara to help him with some carvings over the summer. Uyehara had always wanted to learn this craft, so he joined in. With his skill in chocolate sculptures and sugar work, Uyehara became especially proficient in the finishing touches on the ice carvings. It wasn’t long before he joined Kolonko at several competitions, traveling to Alaska and China, for example, and taking the gold in the 2013 World Championship in Alaska and the International Championship in Harbin, China.

While he’s got the Last Shop Distillery in place as part of his retirement plan, he doesn’t plan on leaving his teaching position at Falk College anytime soon. He’s been on the faculty there since 2006. His classes include an introduction to culinary, professional baking and fine pastries.

Featured image: Chris Uyehara in what he calls his playhouse among casks of his whiskey.