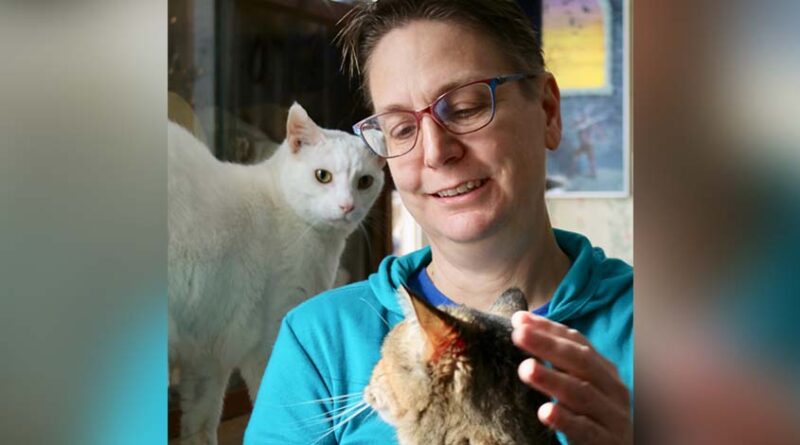 Some people say that a cat makes you a better person.

It’s neither a servant nor a partner, but a friend. You tell your cat a lot. You ask it questions all day and don’t get many answers.

You hope your personality and your cat’s will intersect during the day and you’ll both enjoy the sharing time together. There’s nothing quite like loving a cat.

But one day, the relationship will end. Cats don’t live forever and neither do we.

Watching your cat fade or knowing you have to leave it behind because of what’s happening in your life, can be very hard—heart-breaking, distressing. As independent as these creatures are, we bond with them.

She has created Mew Mew House at Second-Guess Farm in Williamson. It is a cat retirement home and a special hospice. She takes in cats who are dying, those who belong to someone who is dying and others that have been left behind when their owner dies and the family doesn’t know what to do with the cat, but doesn’t want to send it to a shelter to be put down.

The first hospice cat was delivered in 2019, a victim of feline AIDS.

Another was deaf and half-blind and needed a place to be.

“He was just not doing well. So I took him in,” Higgins said.

“She had heart failure, was hyperthyroid and her family was moving to New Zealand. They knew there was no way they could keep Skittles; she would die in transit,” Higgins said. “They found out about me through friends, one of my colleagues at the UofR lived in the 19th Ward and interacted with the cat rescue group there.

“I was reluctant at first to take in Skittles because I was scared how difficult she was going to be. She was a mini-Tortoise shell cat. She had ‘tortitude’ and was a very angry girl and she had to be given a pill twice a day. Most of the cats here I get them to a place where I just put a pill in their mouth, but Skittles, was like ‘Oh, no!’ So, I had to get a little pill-popper thing and coat the pills with gooey yummy stuff and she bit me more times than I care to count.

“Then, in the end, I could tell that she loved me and trusted me. She started to decline because of kidney failure and I had to let her go. That was probably the worst-case scenario for me.”

Ask Higgins about losing Skittles and you’ll watch a tear trickle down her cheek. She is invested with every cat she decides to take in. People know if she accepts a cat, it will be loved.

Jeter and her brother, Peyton, came to Higgins when their owner died.

“The family was distressed. They felt, ‘Mom is gone, but we still have her cats. We don’t want to take the cats to a shelter because this is our last connection with Mom.’ Not only do I take hospice cats and older cats, I also take cats for families who are mourning the loss of someone else,” she explained.

Peyton has since died. Jeter, softly emanating a humming purr, was sitting in Higgins’ lap as she talked.

“There’s not much you can do for him,” Higgins said.

Higgins said she had spent the previous Monday on her kitchen floor crying because the owner of two cats in her hospice had died.

“The woman had terminal cancer. When I found out she had passed I immediately dragged the cats into the kitchen and hugged them for a while.

I ugly cried,” she said. “When I have to take a cat to the vet and their time has come, I ugly cry. Some people when they cry, they’re beautiful about it. I just melt. My whole face is contorted.”

“People who send their animals to me, I have to tell them, ‘There are a lot of cats here. This isn’t going to be one-on-one all the time. But the cats are fed, they go to the vet when they need to and I’ve had enough experience to know when it’s time to let them go.” 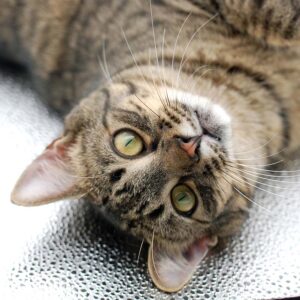 “I think families are relieved that they don’t have to worry. They know I care. I’ve cried on live internet TV. I care as much about their cats as they do. They’re trying to do the right thing for the animal. For better or worse, they put their faith in me that I will do the right thing and I do the best I can, Higgins said. “I have some resources. The best thing about doing this is that I have a great relationship with the Williamson Animal Hospital, they take me right away.”

“There are 30 cats living here now,” she added. “I’ve probably lost 20. My dream would be that I could survive from donations from the community and not have to ask a family in mourning for money. I ask people for $250 for intake because most of the time animals that come in often haven’t had vet work for a while, so I have to take them to the vet right away. Then I ask for $70 a month maintenance, if they can afford it. But I haven’t turned anyone down yet who hasn’t had the money.”

Higgins is a former University of Rochester instructor who started geologists and paleontologists on their careers, spending years in the classroom and the lab until her job disappeared.

With the evaporation of an academic life Higgins had known for well more than 20 years in research and teaching, she fell back on an old love, cats, and turned to meet some needs she had the heart and now the time for.

The divorce from her husband of 17 years is fairly recent. She has a special needs son who is doing well at Wayne Education Center. Completely on her own, she has struggled to monetize her varied interests and avocations but it hasn’t been smooth.

In the house in Williamson are at least 600 cameras. She and her husband were collectors and loved putting new film through old cameras. She has a side business there, PaleoPix, specializing in pet photography.

From the age of 4, Higgins has loved to draw animals and now uses her digital skills to create artwork of pets, another part of PaleoPix.

She maintains contacts with her old research buddies and has a third business, Epic Isotopes, where she uses her skills in advanced technical instrumentation to support scientific research conclusions, such as at the Natural Trap Cave in northern Wyoming where she proved that yes indeed, cheetahs of many thousands of years ago had a taste for pronghorn antelope.

Higgins has developed and is trying to commercialize SHARE (Sustainable Holistic Arts and Recreation Events) as an online creative community.

“We want to have events where people can express their creativity however they want—clapping their hands, drawing, photography, making music, sewing, cooking—no matter how good they are or how good they think they are, to facilitate a place where we’re all going to get together and be creative,” Higgins said.

She had a YouTube channel for earth science education, another for PaleoPix and Mew Mew House and every Wednesday at 1 p.m., you can connect with “Cat Chat with Penny” on YouTube. She offers practical expertise in caring for cats in ways that won’t have you coughing up furballs. One of the rooms in her house has been converted to a small internet studio for her Cat Chat programs and teaching videos.

In another branch of her consulting, Epic Isotopes, Higgins delivers contract content for homeschooling including programs on paleontology. She also writes and delivers speeches and has been published in scientific and opinion magazines.

Like many gifted, restless people, Higgins has all these gifts and interests. But now outside of the stability of academia, she’s had to focus on making a living. The piece she won’t give up is her caring for cats. She said that with 30 felines, she has reached equilibrium, with vacancies surfacing when one of her charges makes the trip across the rainbow bridge.

“I feel like this is mid-life crisis time for me. There are days when it’s crisis.

Somehow, I’ll pay the mortgage. I don’t know how this is going to go,” she said. “I have a few resources left. I did make the conscious decision not to just jump back into academia, it was just a little too toxic for the person I am. My mental health right now is better than it’s ever been; my financial health is a train wreck.”

Get more information about Mew Mew House at Second-Guess Farm in Williamson on Facebook, on the web at www.paleopix.com, or call 315-904-4226.

Featured image: Peggy Higgins, who created a hospice-type facility for cats in Williamson, with two of her cats. The Mew House at Second-Guess Farm in Williamson is a cat retirement home and a special hospice. She currently houses 30 cats at her place.