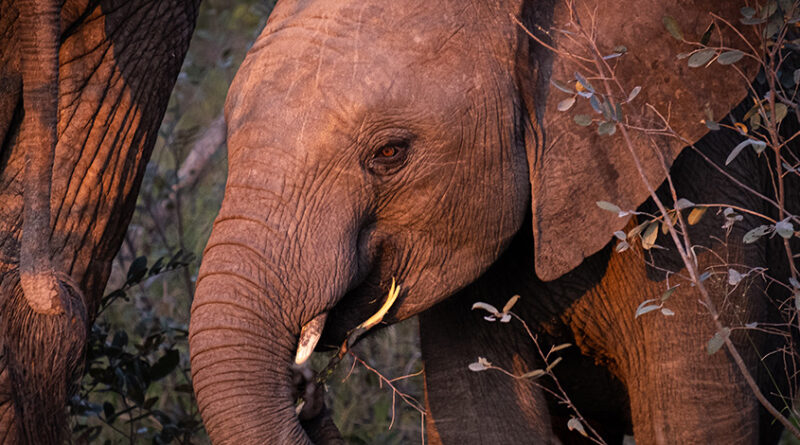 Photos and STORY by David Figura

Have a dream trip on your bucket list? Do it now.
The no-go years could come around sooner than you think.

going up to the top of Table Mountain that overlooks the city and spending a day traveling down to the Cape of Good Hope (the southwestern end of South Africa, where the Atlantic Ocean meets the Indian Ocean). We stopped at Boulders Beach, where there was a massive colony of breeding African penguins.

From Cape Town we flew north to Kruger National Park, where we were picked up at a small airport and driven to Hamiltons Tented Camp.

We stayed in luxurious, glamping-like tent structures connected to the main lodge by a wooden walkway, which was some eight-10 feet off the ground.

Our sleeping quarters were spacious, with teak floorboards, king-sized beds with mosquito nets on all sides, outdoor showers and a deck with a superb view of a river bed.

The weather was comfortably warm during the day and cool at night. It was the beginning of the dry winter season and relatively bugless.

After three days at Hamiltons, we traveled about two hours to Jock Safari Lodge, also in Kruger, where the accommodations, food and wildlife sighting opportunities continued to be amazing.

The photo safari routines were similar at both camps.

We got up early every morning before sunrise and departed before 6 a.m. We had trained rangers as our guides, driving in a vehicle with partially open sides and large seats that afforded good views of wildlife from all angles. The morning outings lasted more than three hours each day. We were back to the main lodge by 9-9:30 a.m. for breakfast.

We went out again each afternoon, driving around for another three hours. Each afternoon outing ended with 30-45 minutes of driving in the dark. The guide drove with one hand on the steering wheel, with the other holding a high-intensity light and flashing it about—constantly searching for the glowing eyes of animals.

During our first morning outing, we came across a pair of lions just off the road, lounging in a field. We encountered them the next day at the tail end of our afternoon outing, driving off road in the darkness and getting some 10-15 yards away from them and their three cubs.

We also had a cool white rhino sighting. The female rhino and its baby were snoozing in the middle of the road, while the father was hanging out nearby. One thing that stuck with me was that the animals had been dehorned, meaning park rangers had tranquilized them at one point and taken off their horns. We were told it was a preventive measure to discourage poachers, which we were told is a big problem at Kruger.

Elephants are huge, majestic beasts. Up close, they make you feel small and vulnerable. One young bull came up within 10-15 feet and did a mock charge, a moment of concern for everyone in our vehicle—except the guide.

Seeing giraffes feeding on leaves on tree tops and galloping away made me think of the dinosaurs running across fields in a Jurassic Park movie. I also spotted a pair mating, which was something you don’t see every day.

We had two exciting leopard encounters. In one instance, the huge cat walked within 10 feet of our vehicle. In the other, the leopard was perched on a branch high up in a tree, guarding the carcass of an impala it had killed and dragged up there.

We got back home May 22. The trip, among the most expensive we’ve ever taken, ended too soon. It was fun, exciting and well worth it.

The photo safaris at Kruger cost us nearly $5,000 each. There are a wide variety of prices for such excursions, from self-directed to guided outings. It all depends on the number of days in the park, the use of a guide game-viewing vehicles, over-night accommodations, etc.

The best way to manage all of these moving parts is to get your airline tickets, book a tour and decide exactly what you want. A three-day, basic photo safari package could cost about $400 USD, while a full-blown safari with all the perks, can cost up to $7,900 USD, according to tourradar.com.

A good friend once told me that retirement often begins with the “go-go” years, which then transition into the “slow-go” years and finish with the “no-go” years.

Don’t wait. Do it now — particularly if you’re financially and physically able.

Not to decide is to decide. The no-go years could come around sooner than you think. ϖ

David Figura is a retired outdoors writer for The Post-Standard, Syracuse.com and NYup.com, He is working on his second book, “Nobody Likes A Whiny Man,” about guys handling life in their 60s and 70s. His first book, “So What Are the Guys Doing?” covered how men deal with middle age.