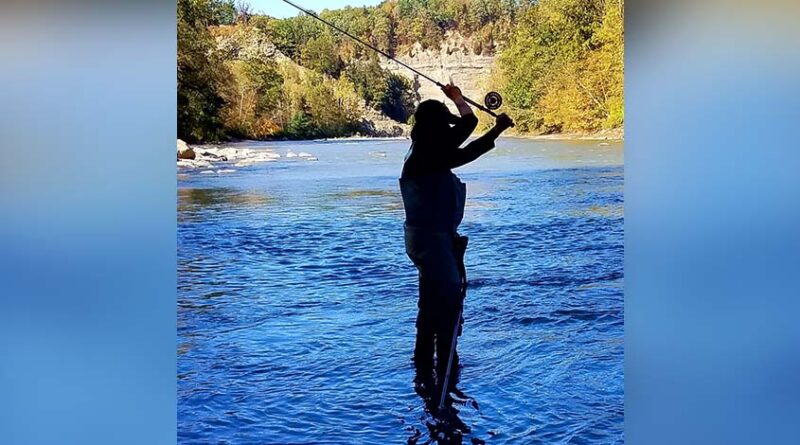 Webster fly fishing guide wants others to feel his passion

Are you ready to try your luck fly casting for trout on area waterways this year?

Want to get in on our now famous king salmon fishing?

You’re in the right place since we have some blue-ribbon trout streams in the Rochester area as well as extremely popular king salmon runs.

If you’re new to the fly fishing sport and need to learn everything from how to cast, where to go, what flies to use or what the water conditions are, Webster-based guide Scott Feltrinelli is looking forward to teaching a new generation of fly fishers.

He’s also available for more experienced anglers who want to up their game and learn from someone who considers every nuance of the sport and treats every aspect of it with reverence and consideration.

Those with a catch, kill and conquer approach to the sport Feltrinelli loves might want to look elsewhere.

“I’m not a part of that. A lot of guides are just out for the money, nothing else, 90% of them don’t put in the extra effort. I realized how much I love the sport and wanted to teach somebody else,” he said.

He wants others to feel the passion he feels for the fishing experience that’s made a therapeutic difference in his life and to learn how important conservation is to keep the fish and their environment healthy.

“You can take it as far as you want. There are so many ways to get into this sport,” he said.

The former pharmaceutical salesman, 58, grew up in Syracuse and lived on Long Island and Northern New Jersey before choosing to live in Webster for its fishing opportunities, relatively rural location, trees and fruit orchards.

Guys and gals who are anxious and have a lot of stress can find the trout stream environment therapeutic. “It became therapy for my anxiety. I’m a hands-on type personality. I need to walk and move,” Feltrinelli explained.

“The rhythmic modality of the process is soothing.”

Feltrinelli is more than a guide, he works with the New York State Department of Environmental Conservation on issues that affect local waterways, including water release, stocking and conservation issues, of which there are many.

There’s a finite amount of fish and space, he said, and there aren’t enough ecological conservation officers to cover the area. Rules are not adequately enforced from fish limits to personal safety.

A world class fishery needs to be protected. That includes spending more on conservation efforts than we do in New York today.

He’d like our conservation officers to do more teaching and education not just enforcement.

In general, he said the younger generation is more conservation-oriented and does a better job of catch-and-release. Those who keep too many fish are part of the problem.

“There’s a different angler today than your dad’s or grandfather’s generation. The old put in and take out approach isn’t as common as people become more educated and want to extend the survival rate of fish,” Feltrinelli said.

Another issue is the release of Erie Canal water that affects the depth and turbidity of creeks such as Irondequoit, 18 Mile, Sandy, Oak Orchard and others. The lower the turbidity level, the better the fishing.

“You can’t just pump too much water willy-nilly. It gets too high and muddy. We need to get it right,” he said.

He helps the DEC make stocking decisions, too. Along with his long-time fishing friend and fellow fishing author, John Sander, Feltrinelli works to help the DEC do the best job it can to make our fishing area the best it can be.

Sander writes the popular Sander’s Fishing Guides including a Western New York edition. Feltrinelli is also a writer for On the Fly Magazine and DEC publications.

There’s more to simply booking a fishing guide date with Feltrinelli. He wants to know about a client ahead of time. That includes their skill level and interest.

His guidance and services

“A lot of people have high expectations. I try to match your need with what I can provide,” he explained.

It helps determine where to take a client for the optimal experience. For a newcomer for example, fly casting somewhere with low-level overhanging trees is not the best place to be. Feltrinelli knows all the best spots in the area and can pick the right one.

“I get people, newbies, who’ve never bought a rod. I’ll educate them completely, everything from soup to nuts, from concept to delivery,” he said.

He makes sure clients come prepared with the right equipment.

Women can be assured that Feltrinelli has them in mind as well.

“Ladies can find the sport intimidating on a couple levels. One way to help with that is to go with a guide and find spots you’re comfortable and familiar with,” he said.

As Sander says in his fishing guide, “It could be argued that the love of fishing is one of the single greatest common denominators among men and women.”

Photography is a big part of fishing with Feltrinelli. He’s spent decades perfecting fish photography skills and it shows in the iridescent colors of the fish.

The “fish whisperer” will look for a shallow oxygenated place to photograph a fish before he catches it. “I like how water distorts imagery. Each fish has its own color and character,” he explained.

The warmer weather means more fishermen on area waterways, but Feltrinelli said not to eschew the colder months since fish use the same waterways all year long.

No matter where or when you go, Feltrinelli said: “The best thing I can give someone is this experience.”