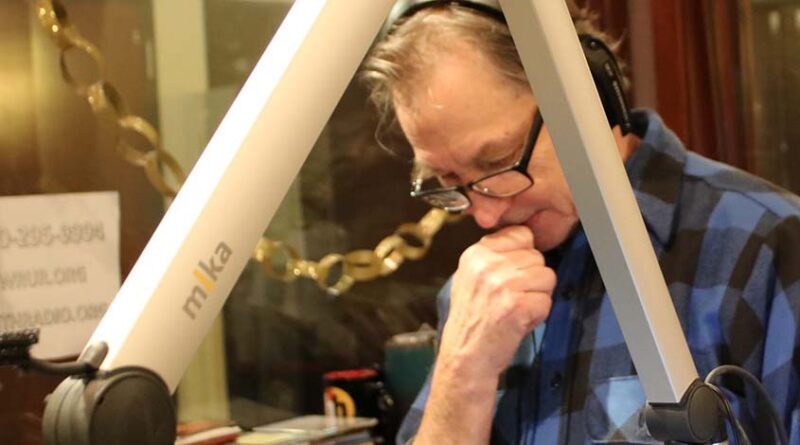 A welder’s helper. A park groundskeeper. A recreation director. A graphics artist. A teacher aide. A househusband…

Then one day, Scott Regan heard about another job that might be opening up.

“It was when WXXI was doing its partnership with the University of Rochester. WXXI got permission to use the radio station, WRUR-FM. The university really didn’t want to be responsible for it. They were starting to have dead air,” Regan explained. “They were searching for a format. What they came up with was AAA, adults album alternative, geared more toward adults than teens. They wanted an Americana thing. Somebody decided that Johnny Cash should have a place to be played on the radio even though the country people wouldn’t play him anymore.”

Since then Regan, 69, has ruled a pivotal piece of Rochester adult music real estate. In the WRUR “different music” ecosystem, he is one of the navigators showing where music has been, where it is going, and where it’s spinning people on their ears — all in his weekday 9 a.m.-to-noon air slot, and 1 Saturday mornings at 10.

He comes to the job uniquely armed: He’s a veteran songwriter whose work has been used by several Rochester-area groups. He’s a performer himself, with one solo album but a participant in several other CDs with different groups, and he’s an on-stage regular. He’s a musicologist who brings satchels full of CDs from home — compilations of music. He has more satchels in storage at WXXI. And he has the station’s digital library to access.

Regan puts CDs together by date, by event (“Christmas,” “Election,” “St. Patrick’s,” “Clothesline” and “Valentine’s Day” among many, many others) and by artist. In a given program, he has access to thousands and thousands of titles.

And from his air chair, Regan guides listeners into spending a moment with a new sound or new voice, then mentions where that local performer or touring band will be entertaining in the area.

He tempts and teases and pleases with music you haven’t heard in 40 years — like Jerry Lee Lewis’s “Breathless,” followed by something you’d never hear in the next 40 years if he hadn’t played it, like Brazilian cellist Dom Le Nena’s haunting “Deux de Rever.”

Listening to Regan, you get a sense of how the music scene is shifting as he reports about artists coming and going, debuting and returning. Some of those artists — especially those who appear at Abilene — stop in while Regan is on air and discuss what’s happening with their music.

When WXXI chose Regan, they wanted someone who would play music college students would like, but their parents would enjoy as well. He’s given the station so much more. Watch him select music in the studio and you see someone pressing for variety and interesting sound.

“I think my audience is composed of curious listeners,” he said. “I think they have a certain bar set for their tastes. It’s not an intellectual bar, it’s a variety bar, they like the Monkees and Regina Specter and Eilen Jewell and the Avett Brothers — a wide range of music.”

Born in Boston, raised in Camillus near Syracuse, he started college at Rensselaer Polytechnic Institute in Troy because he loved math and science.
So he thought.

“RPI was a great school. I was a soccer player,” Regan said. “I was captain of the freshman team. Then I played jayvee hockey at RPI, too. I liked math and science. But one day I said to myself, ‘If I’m successful here, I’ll be doing this for the rest of my life’ and I just couldn’t see that. I decided I was not going back.”

Back to the Syracuse area he went. He was a welder’s helper and the day he helped his boss with a math problem, he decided he needed to return to college, this time to Oswego State, where he got degrees in art and English.

In Oswego he met a lifelong friend, Chuck Cuminale, known to most folks as Color-Blind James. Like Regan, Color-Blind was a songwriter. The two have worked together, as groundskeepers in Saratoga, and onstage.

“I started playing coffee houses in Spokane every Saturday night, which was a real experience. You showed up and played for tips. You had to engage the audience, which is something I had never really done. Especially solo. I had played with Color-Blind, as a duo, and other people played with us. But playing solo, you’re there by yourself and you’re really exposed and it feels really naked. You start to figure out how to interact with the audience and write songs that engage the audience. They never told me I couldn’t do it. I was there every Saturday night for months. I never got to see the first year of Saturday Night Live because I was playing there,” he said.

Returning to Oswego, he reconnected with Color-Blind James and the duo played at the Low-Life Café, a mecca for the Oswego music scene.

“That was great. During the day I was a recreation supervisor for the town of Manlius Parks and Recreation. I met my future wife, Sue Rogers, there in park and rec — she did puppet shows. They had a bus that went around the town and did puppet shows and had books, the PupMobile. We started working on puppet shows together and wrote a whole summer’s series of shows where she did the puppet show and I did the music for it.

“I was also playing in a jug band at that time, the Water Street Boys, playing guitar and writing most of the songs. Color-Blind was in the band for about a year. We split the songs, either he wrote them or I wrote them, then he left the band and went electric.

“The Boys went to New Orleans and played Mardi Gras for a couple of years. I had always had this impression of Mardi Gras being colorful and bright and shiny. I came away thinking there was this dark gloomy side of it.

It was so mysterious. There’s a whole different vibe when you’re there and you’re doing it. We were really part of the culture of the Mardi Gras. We played in the street every day. We made a lot of money playing the street.

We got invited to private parties to play. We played a wedding while we were down there. Mardi Gras was a great time. Some of my friends are still living there.”

Regan moved to Rochester and Regan followed, getting a job in the graphic arts department at RIT, which he loved. They got married and when she was pregnant with the first of their two sons, Regan decided to be the househusband and he got back into writing songs, and got inserted into the Rochester music scene.

“It started in 1996,” he said. “We were a collective of songwriters, that’s how we got started, with four or five songwriters in the band. We got together once every two weeks at my brother Kerry’s house. Then one of the guys said, ‘Hey, I got us a job!’”

Regan argued, “We’re not a band. I knew what a band was. We didn’t have a drum, bass player or instrumentalists. One guy played the accordion and he was really good. But we were all songwriters.”

“So we said, ‘Sure, we’ll take the job,’ which was at the Rose & Crown on Monroe. It was run by this guy from England, Will Taggert. He needed a band because his other band backed out. So my friend got us that job,” he continued. “We didn’t have a name for the band so Taggert used a name for the band he was in, in England, when he was a kid — Watkins & the Rapiers. We weren’t a band and we really didn’t expect to be doing a second gig. So we didn’t worry that we didn’t name ourselves or that he had chosen a name for us.

“Then after we played, he asked us, ‘Do you want to come back next week?’

There continues to be more performing for Regan, as he joined old friends Connie Deming and Steve Piper to form The Spring Chickens in 2017.

“Rochester has had singer-songwriter nights for 15 years, where you’d have three or four people on stage who take turns singing their songs.” Regan explained. “Connie and Steve and I started picking up on this trio thing and we developed into a little band. We had played together on stage together since 2012. But we made no album; I wish we did.”

When Regan visits a venue to hear a performance, he often has a sketchbook with him. That arts degree from Oswego wasn’t for nothing. He does ink drawings evocative of performers in their moment.

“I was a member of the BIC Pen School of Art,” he said about his hobby.

“Until I started to realize BIC pen images fade. I’ve always liked sketching from life. It’s something you can do wherever you are. I like drawing people, so I often will sketch when I go out to see music, which is interesting when you’re trying to sketch a musician. If you’re trying to sketch someone in the audience, they’ll see what you’re working on and they become self-conscious, which results in a game of eye contact. But with a musician, everyone is looking at them anyway, and they’re concentrating on something else. They’re not conscious of you — it’s easy to drop into their world.”

He has assembled sketch books like his satchels of CDs, a diary of his life in drawings and notes captured over the years — many drawings combined with important notes, like his favorite recipe for pumpkin bread.

Regan and friend, Jeff Spevak, a Haiku poet and arts reporter for WXXI, published a book of sketches and poetry, “Jazz Lines.”

On his radio programming, Regan is always complimentary and sensitive to performers’ skills and on the “Open Tunings with Scott Regan” Facebook page, you get a bio and often a video of a performer who is appearing locally.

He also helps challenge new listeners and songwriters and artists. A few years ago, Sarah Hendershot hosted a contest, “If All Rochester Wrote the Same Song,” where a title for a song was decided, and songwriters took a crack at it — the prize: a concert where you got to sing your version.

Regan’s entry for the contest was titled “Don’t Go Drinking on an Empty Heart” and ended up on his CD, and it’s clever.

The pandemic ended that contest, but singer Sarah DeValliere is bringing it back this year. She’s already been into the WXXI studio to interview with Regan.

“We have a really strong music scene here,” Regan said. “Some of our Rochester people are getting a lot of traction nationally — Michaela Davis is touring, Danielle Pounder got a nice write-up in “Rolling Stone.” We have a strong community of songwriters and musicians, a lot of jazz musicians thanks to Eastman.”

And, sharing all that six days a week on the air is Scott Regan.

Featured image: Scott Regan at the radio studio of WRUR-FM (88.5 FM) in Rochester. He is on the air weekdays 9 a.m. to noon and on Saturdays at 10 a.m. Deciding what music to play next from a very large supply of choices, Scott Regan is absorbed in picking the tunes that compliment what he’s innately chosen as the theme for the broadcast day.