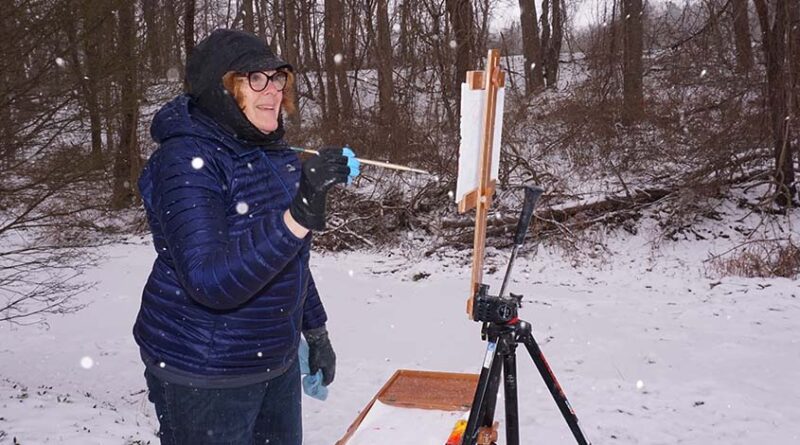 Snowflakes swirled around Barbara Jablonski as she depicted in oil the stretch of the Erie Canal that flows behind her Pittsford home.

“The canal is one of my favorite subjects to paint,” the plein air painter said.

Plein air painters create their works out of doors, by natural light.

Jablonski’s paintings have appeared in shows and galleries around the Rochester area and garnered many awards, including first place in the 1000 Islands Plein Air Artists Competition. The Rochester-born artist is the founder and president of Genesee Valley Plein Air Painters, Inc., an artists’ club, and a professional musician.

Artistic expression appears to run through Jablonski’s family from a great-grandmother who painted in the Renaissance style to her late father, Donald O’Connor, who played the trumpet and banjo. As a youth, O’Connor played onstage with his mother and brother, who were also musicians.

“They were called ‘The O’Connor Brothers,’” Jablonski said, who in March turned 73 years of age. “They used to play in the speakeasies during the Depression to put food on the table.”

Both threads, painting and music, are woven through Jablonski’s life. While working as a marketing consultant and in other positions, she studied painting under such internationally acclaimed artists as Kevin McPherson and Steve Carpenter.

“I started out painting in acrylic, but when I learned the beauty of oil, that became near and dear to my heart,” Jablonski said.

Jablonski created still-lifes, portraits and other classical works until the 1990s, when one of her art teachers introduced her to plein air painting. The avid hiker and camper immediately took to it.

“I love being outside,” Jablonski said. “It was a natural fit for me.”

Eventually, Jablonski began gathering with other plein air painters at outdoor locations, some of which were isolated and remote. The groups gave their members a sense of security and allowed them to share their enthusiasm for plein air painting.

“You enjoy the energy that comes from other folk,” Jablonski said. “You’re only talking about painting. You’re solving problems.”

Seeking to spread the benefits of group plein air painting, Jablonski formed the GVPAP in 2005. Professional artist Judy Soprano, a longtime friend of Jablonski’s, joined the club early on. Soprano values the camaraderie and security that the club’s group activities provide.

“It’s hard when you’re painting on your own,” said the Livonia resident, who is in her 80s. “With the club, at least three people show up.”

GVPAP, which began with just 45 painters on its roster, eventually grew to have 60 active members, including artists from as far away as Buffalo.

Before the coronavirus pandemic hit, the club regularly held in-person plein air workshops, juried competitions and large-scale events. All of GVPAP’s members participated in Under Open Skies; Painting Nature Past and Present, which was held in 2008 at the Genesee Country Village & Museum in Mumford.

“We worked for a whole year on a theme of painting the Genesee Valley,” Jablonski said.

From the way Soprano speaks, such events are right up Jablonski’s alley.

“The woman is so full of really neat ideas,” Soprano said. “Her energy is just unbelievable.”

GVPAP has been forced to cancel some events since the pandemic hit and hold others remotely, though it has continued to schedule in-person activities that could be held outside.

“Being outside and painting is one of the safest things you can do,” Jablonski said.

When not running GVPAP, Jablonski enjoys setting up her easel at sites near and far.

“My love is nautical painting,” she said. “I love painting boats in water.”

Jablonski has gone to her backyard, to parts of the Finger Lakes region and across the US to create her paintings. When far-off locales have beckoned, she’s hitched up her small travel trailer to her SUV and headed out, accompanied by Jessie J, her trusty silky terrier.

Jablonski completes her works in no more than two-and-a-half hours, a time limit imposed by the need to paint before the natural light changes. Though she will paint even if it snows or rains, she packs up her easel when hail falls.

“When the hail hits your painting, it sticks to the painting and it makes, like, volcano craters,” Jablonski said. “When it melts, your painting is ruined.”

The artist’s creations have earned awards and accolades at local and regional plein air competitions. Lovers of the that style of painting have been able to view or purchase Jablonski’s works at museums and other venues around the Finger Lakes, including the Memorial Art Gallery’s store, THE STORE @ MAG.

When not standing before an easel, Jablonski might be found onstage.

Proficient in the Appalachian dulcimer, the hammered dulcimer and the guitar and ukulele, the professional musician has played around the Rochester region in duets or as a member of two bands. She’s also a longtime member and past president of the Golden Link Folk Singing Society.

Well-known folksinger Allen Hopkins, one of Golden Link’s cofounders, has played with Jablonski in local schools and public venues since the 1970s and counts her as a friend.

“We get into arguments sometimes about how to do particular songs, but overall she’s been just a joy to work with,” Hopkins said.

The two are longtime members of the Celtic music quartet Innisfree. Denied by the pandemic the opportunity to perform for nearly two years, the band was finally able to mount the stage of the Big aLICe Brewing company in Geneva, New York, last November.

“We got together after 22 months,” Jablonski said. “It was wonderful!”

In addition to painting and playing music, Jablonski enjoys spending time with her two grown daughters and two granddaughters, aged 9 and 10. She seems bent on passing her love of the outdoors on to the kids.

“I take them camping every year” she said. “I’m also trying to teach them how do draw, paint and play the ukulele.”