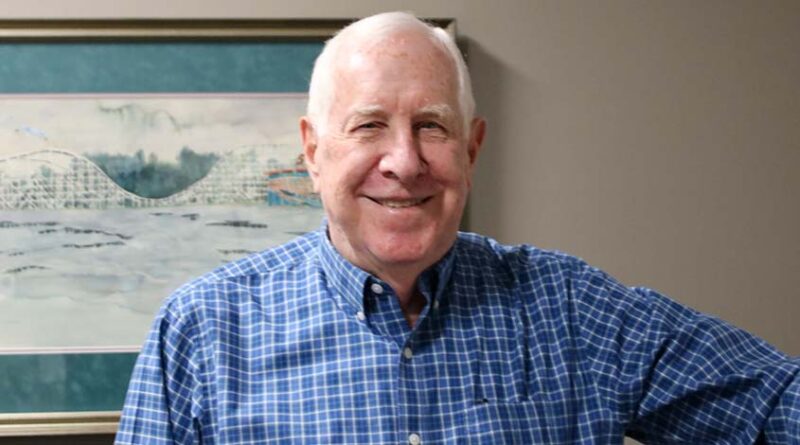 Longtime financial planner transitioning into a new cycle of his life, which will include traveling, visiting national monuments and more

He just has that air about him, that comfortable, professional presence.

“Two years ago, I was getting on a plane flying into Rochester. As I’m walking down the aisle, a lady said, ‘I know you! Aren’t you Jim Terwilliger? You write that column!’ Yep, that’s me all right,” he responded.

Sitting in a small meeting room at Canandaigua National Bank where he is a senior vice president, Terwilliger was thinking about special moments in what has been a remarkable trio of careers.

Now 79, he is slowly pulling the plug after 20 years at the bank. Before that, he spent 30 years building and leading a 250-person division at Kodak. And in his vocational career, he has been a dedicated community leader and author of his “Financial Health” column that graced the first-ever issue of 55 Plus magazine and has been included in the next 73 issues.

“It’s time to let someone else have a crack at it,” he said. “I’ve always been satisfied with community work and the decisions the council makes impact so many people, not only the 11,000 residents of the city and the property owners here, but the people in the town of Canandaigua think of Canandaigua as their city. The actions by city council really impact 20,000 – 25,000 people. That’s quite a responsibility, but it has been my most satisfying experience in the community.”

As for the column, which Terwilliger clearly enjoys putting together, “The plan is for my boss, Laurie Haelen, to write it,” he said. “I’m going to phase into retirement the first quarter this year. I will no longer be full time at the end of February. But I will have some part-time role to play until the end of the year.”

That column has been solid since 55 Plus began.

Terwilliger laid out expert financial planning advice in a way anyone could read and understand. He cut through the Gordian knots of taxes and estate planning and new regulations and just clearly made sense.

And he has those fans.

“I get calls all the time,” he said, “mostly people asking questions or wanting further clarification. Once in a while it will result in a new relationship for the bank. The main thing, it’s a very constant way to keep the bank’s name in front of people and hopefully to demonstrate the confidence, competence and knowledge that the bank represents. I think that column has had a big impact.

“I was going through a receiving line at a wake. I was a brief acquaintance of one of the relatives. I’m going through the line and a woman said, ‘Oh, I read all your columns!’ I didn’t know her from Adam. We’d never met before.”

Celebrity can be a local phenomenon and not many chemical engineers who have turned senior financial planners ever see it.

Terwilliger started life as an engineer, getting his bachelor’s, master’s and Ph.D. in chemical engineering from Rensselaer Polytechnic Institute. He was one of the first engineers hired into his division at Kodak, where he recruited and grew other engineers, eventually having 250 people under him; many of whom he had to let go in a downsizing. That was painful; to bring people in, nurture and guide them, then show them the door. When the early retirement offer came to him, he took it.

Restless and on the street, so to speak, he learned to do taxes, and then got certified as a financial planner. He was a Canandaigua boy, valedictorian of his high school class, and someone who designed the official city flag (“My mother, my grandmother and Mrs. Fletcher actually sewed on our dining room table.”)

Would something local come up for him?

He went to CNB and offered his services as a certified financial planner, the first for the bank. In the next 20 years, he would build another new department, watching his people grow and prosper in the bank, taking care of clients.

“For my work life, that has brought me a lot of satisfaction, starting up something new and having it flourish to the point where it just becomes part of the company environment, part of the process. It’s more fun than coming into an organization and fitting into a slot that’s already been developed.

“I have a deep pleasure watching people develop and taking positions I’ve designed,” he said.

“We have a succession plan at the bank, so there’s a new person who took over my responsibilities and one of the major parts of her job is to continue the mentoring I did. In fact, I will also still be doing some of that.”

But he turned the corner for good in February. The final door may be a while off, but he can see it.

“Travel is the number one thing,” he said. “I really haven’t had time to develop other interests or hobbies, which is a little dangerous when you retire, you really should have some hobbies or interests. I really don’t have any, but don’t see any problem filling my days.”

He and his wife, Ellen, who is a nurse, have a house in Canandaigua and a small cottage 110 steps up a cliff from the Canandaigua Lake at Bristol Harbor.

“I take care of all the outside work and I’ll continue to do that as long as I’m healthy. My mom lived to be 93. I had the cottage built 44 years ago. It’s small, cozy and comfortable. We can use it in the winter and summer. We have a wood stove plus electric heat. On a weekend I can put on the fire and watch the snow fall. I watch football, too,” he said.

The Terwilliger kids, Cheryl and Catherine, have their own careers out of the area and have blessed Jim and Ellen with two granddaughters. Life is good.

“I want to have the time and room to do everything I want to do,” Terwilliger said. “I can’t work 40 hours-plus a week and do that. I want to open up more time for myself and my family.”

The work, though, has been so important to him. The roles he had at Kodak and at CNB were so different.

“For me, in your older years, people like to do things that help others, are meaningful to others. At the bank it’s a great organization, has a great culture and everyone is willing to pitch in as part of a team.”

Jim and Ellen have been to much of Europe. Now they’d like to enjoy a river cruise, visit the national monuments and they’d like to see Southeast Asia.

“I don’t tend to look in the rearview mirror, other than to learn a lesson and apply it to the future,” he said.

And for a man who has helped so many, directly and indirectly, professionally and in a neighborly fashion, with respect and affection, the future is something to learn from, treasure, remember and share.