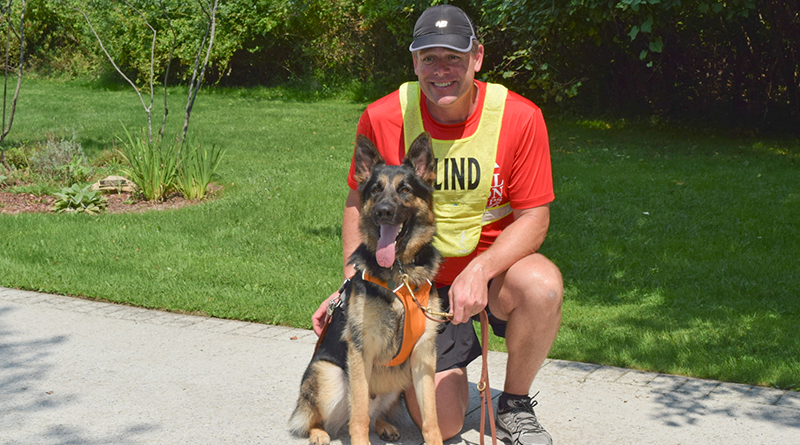 At 75, you’d think Bonnie Kelly might want to kick back in a recliner and relax in her well-deserved retirement.

The energetic, age-defying Victor resident is happiest when she’s hiking down the backroads of her hometown with a large German shepherd or labrador retriever — or both — at her side.

Kelly is a puppy raiser for Guiding Eyes for the Blind, a New York-based nonprofit organization that breeds, raises and trains dogs for people who are blind or visually impaired.

She’s been at it solidly for the last 13 years, since before she retired.

As a volunteer, Kelly raises a pup from 8 weeks old, teaches him or her how to be comfortable, mannerly and unflappable in every situation. Then about one year later — just about the time she’s fallen madly in love — her fully socialized charge goes off for training at Guiding Eyes for the Blind to become a guide dog.

Apparently Kelly loves her foster role, because she’s raised a baker’s dozen of the pups — so far.

“Cora is number 13,” said Kelly as she oversees canine playtime in her spacious backyard. “Seven have been labs and six have been shepherds, so I have to do one more just to make it even, right?”

Jake, Milton, Yuri, Nick, Susie, Hadley, Pride, Joy, Klinger, Rasha, Cotton, Luna and Cora — they’ve all got a place in her heart and space on her family room wall, where photos and graduation certificates bear witness to 13 jobs well done and 12 lives changed.

The 13th will come when Cora graduates and is matched with her future partner.

The benefits of puppy-raising are many, Kelly said.

“Part of our job is to get the dogs exposed to as many things as possible,” she said. “So that causes me to go out and do something I probably wouldn’t necessarily do.”

She’s also required to walk the dogs a couple of miles a day, which is wonderful exercise.

“This winter was not good, but when it’s too cold, I go to the mall and do a mall walk,” she said. “It gets me out and going.”

Kelly also volunteers at the Granger Homestead in Canandaigua two days a week — not as much for herself as for her pups.

As it turned out, one of her charges — Nick — actually had an ear for music.

“We have a CD that’s from a woman who played the Clementi pianoforte at the Granger, and I’ve found that that’s very relaxing to the dogs,” said Kelly.

In fact, she went so far as to pass along a copy of the CD to Nick’s partner when he went into full-time service. Kelly later learned he responded to it immediately.

“Nick went to a single mom who’s blind and has a teenaged son with autism,” said Kelly, who keeps up with the partners of each of her former pups. The three are featured in a Guiding Eyes for the Blind brochure, she said. And the son, now in his 20s, is engaged and is a bus driver.

“That’s one of the great things about raising a guide dog — you’re opening up a world for a blind person,” said Kelly.

And sometimes her dogs help restore what has been lost.

“The person who has Pride, when he was 31 he was in an automobile accident and severed his optic nerve,” she said. “So he went from full vision to absolutely nothing. It took him two years to get back to working.”

Training takes more than a year

Puppies spend more than a year with their raisers — from 8 weeks old to 15 or 18 months old, Kelly said. During that time, they undergo two formal evaluations and learn about 15 commands from their raisers, including “sit,” “down,” “stay,” “come,” “back,” “close” and the essential “get busy.” (That’s guide dog-speak for “go outside, do your business and make it snappy.”)

“We get them to the mature age where they are ready for the tough stuff,” said Kelly.

After that, the dogs go off to school for six months of formal training, learning about 50 commands, among other things.

Then the new partner comes to the school and spends three weeks of intensive training onsite with their new guide dog, Kelly said.

And finally, a trainer travels with a guide dog and its new partner to their new home, spending up to a week getting the lay of the land and learning commands and skills specific to the environment.

Kelly and her pups are well-known in Victor and surrounding communities — one is always in tow when she heads to the doctor or dentist, grocery shopping, sporting events, nursing homes, libraries and public festivals.

“She likes to take them to restaurants, that way she doesn’t have to cook,” joked Jim, Kelly’s husband and partner in puppy-raising.

“Our favorite place to go is Rheinblick’s in Canandaigua, because they really fuss over the dog,” said Kelly.

She also takes them with her to church on weekends.

“To be honest, I had kind of gotten away from church,” said Kelly. “Jake was 6 months old and I took him to the East Bloomfield Methodist Church. I walked into the front door, and Bonnie Bidwell walked into the back door with her guide dog. That struck up a friendship with us, and she kept encouraging me.”

Most recently, her eyes are on Klinger, a guide dog and Guiding Eyes’ first-ever “running guide dog” she raised a few years back.

Klinger has a shot at national recognition if he’s chosen to be American Humane’s 2018 American Hero Dog, and in turn earn $5,000 for Guiding Eyes for the Blind.

Klinger’s partner, Richard Hunter of California, is a United States Marine Corps veteran and avid runner. But Hunter started losing his sight in 1989 because of retinitis pigmentosa, an inherited, degenerative eye disease. Then in 2014, he was struck by a car while riding his tandem bicycle, and airlifted to receive emergency care.

Enter Klinger, who’s since given Hunter new freedom and the ability to train for and compete in marathons across the country.

Kelly, who’s proud of all 13 Guiding Eyes for the Blind dogs she’s raised, hopes people will take time to vote for Klinger at http://herodogawards.org/dog/klinger/ so he can advance in the nation-wide competition.

The first round of voting was open through April 24, at which time Kelly hopes Klinger will move to the finalist category and voting can continue through the summer.

One thing is certain — puppy raising has helped keep her healthy, both emotionally and physically.

“I think I’d be very bored right now if I didn’t have a dog to raise,” she said.

About Guiding Eyes for the Blind

• It costs $50,000 to breed, raise, train and match a guide dog, and support the team throughout the lifetime of the dog

• More than 500 pups are born each year; 92 percent are labrador retrievers and 8 percent are German shepherds

For more information on Guiding Eyes for the Blind based in Westchester County, visit www.guidingeyes.org.