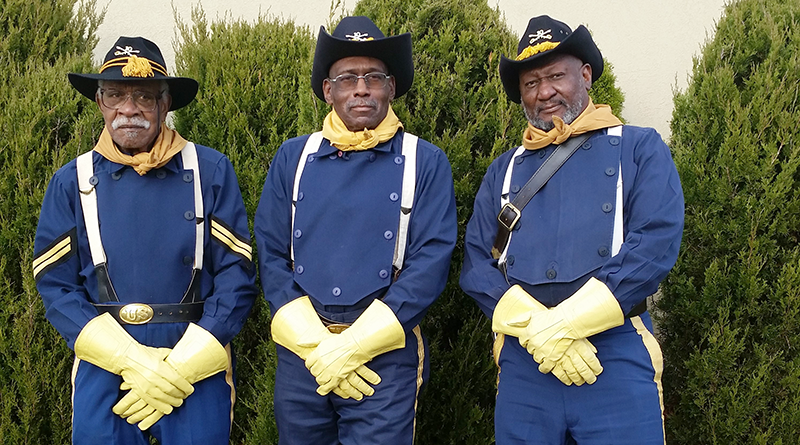 Danny Wyatt, a retired Kodak engineer living in Rochester, felt there was something important missing from his childhood education.

“There were maybe two paragraphs about African American history in our textbook,” he said.

That’s one of the reasons why he and his colleagues at the Pennington-Moye VFW Post 9251 in Rochester work so hard to share the little-known history of America’s Buffalo Soldiers with the public.

In 1866, after the Civil War, Congress passed legislation that allowed African-Americans to join the regular peacetime military, thus forming the 9th and 10th cavalry regiments. These African-American regiments served on the Western frontier protecting settlers and fighting in the Indian Wars. Legend has it that the Comanche gave these soldiers the nickname “Buffalo Soldiers” because their dark skin, curly hair and bravery in battle reminded them of the iconic buffalo that roamed the western plains.

After the end of the Indian Wars in the 1890s, the Buffalo Soldiers fought in Cuba during the Spanish-American War. They were deployed to Mexico in 1916-1917 to help General John J. Pershing in his hunt for the revolutionary Pancho Villa. The Buffalo Soldiers’ then went on to be America’s first park rangers at Yosemite, Sequoia, and Kings Canyon national parks.

Reaves and Wyatt — along with Henrietta resident and Army Air Corps veteran Charlie Price — comprise the educational presentation team of VFW Post 9251. They travel to local schools, nonprofit groups, and libraries to present the history of the Buffalo Soldiers. They recently gave one of their presentations to a team of FBI agents.

Audiences who attend a Buffalo Soldiers educational presentation won’t just learn about the 9th and 10th cavalries in the 19th century though. The team discusses the history of African-American men and women in the military from the Civil War up to today.

Price’s portion of the presentation includes the story of his grandfather, who was by U.S. Army General Ulysses S. Grant’s side as Lee surrendered at Appomattox in Virginia. His grandfather was not only present at this historic event, but he was also the soldier who raised the American flag over the courthouse that day.

Price also tells audiences of his time in the Army Air Corps during World War II, when there were two different armies — one black and one white. He felt the sting of segregation even as he served as one the famous Tuskegee airmen.

In 1947, Price became the first African-American police officer in Rochester. It wasn’t until 1948 that an executive order from President Truman officially ended segregation in the military.

“This is the history that was never told,” said Reaves, who had never heard of the Buffalo Soldiers at all until fellow African-American soldiers stationed with him in Korea in the 1970s told him about their contribution to American military history.

Another Buffalo Soldier member, Shirley Boone, portrays Cathay Williams, who joined the Army in 1866 disguised as a man by the name of William Cathay. Williams was the first African-American woman to enlist in the American military. Boone said that Williams’ story is vital to truly understanding American history.

“It is important to not only honor African-American men that served this great country, but African-American women as well as they blazed a trail for women to follow. It is imperative that we tell her story so that we learn from the past and keep moving forward,” Boone said.

Reaves, Wyatt, Price and Boone and the other members of VFW Post 9251 don’t want anyone else to miss out on these important facts about America’s past.

The Buffalo Soldiers also have proclamations from Monroe County, the town of Brighton, and the city of Rochester. The Rochester Police Department and a VFW post in Dundee also donated historic McClellan saddles to the group to use in its material culture presentations.

A recent Buffalo Soldier presentation to Sage Rochester, a program of the Out Alliance, spurred the group to take up a collection supporting the Buffalo Soldiers community work.

Anne Tischer is the Out Alliance outreach coordinator who arranged the Buffalo Soldier appearance at a recent SAGE meeting.

“This history was not in the textbooks that we grew up with,” she said. “With authentic props and well-told stories, Bing and Charles made the past come alive for our seniors and I was repeatedly told by attendees that their presentation was the best ever.”

To inquire about a Buffalo Soldiers presentation, contact Bing Reaves at pete0657@aol.com.