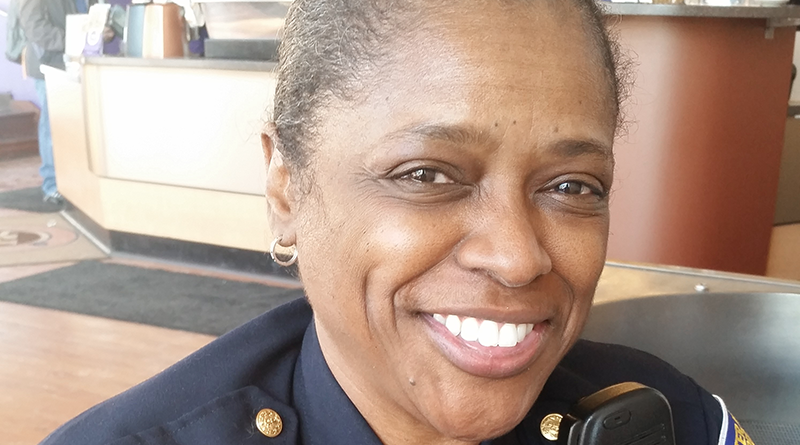 If you crank up the tunes — preferably some good old-fashioned 1970s dance music — Darlene Rogers will be the first on the dance floor.

“If you put on some ‘70s music on right now I’ll start dancing. And I dance in heels. I can’t dance in flats,” she said.

Rogers has about 100 pairs of shoes and loves a nice pair of high heels. But when she isn’t grooving to some dance classics at a party, club, or wedding she is wearing the sensible shoes of a professional cop.

At 58, Sergeant Darlene Rogers is the oldest female police officer in the Rochester Police Department and the only female officer over 55. Rogers joined the force in 1988 and is approaching her 30-year anniversary in December. Originally from Manhattan, Rogers came to Rochester to attend The College at Brockport.

As a student, she envisioned a future as a social worker working with child protective services. But a police-recruiting poster caught her eye one day, and she decided to take the civil service exam. She passed and went on to the police academy despite disliking guns and never even having handled one before.

Over the years, she has gone undercover as a sex worker on Lyell Avenue and was first on the scene at one of Rochester’s most infamous crimes. She was a D.A.R.E. (Drug Abuse Resistance Education) instructor in area classrooms and has overseen school resource officers assigned to the Rochester City School District.

Quite a bit has changed since Rogers started her career 30 years ago.

One of the biggest changes Rogers has witnessed is the rise of technology, including the use of body cameras. Paperwork filled out on clipboards has given way to computers in each police car. A cop used to have to know the geography of city streets inside and out so as not to get lost on a call, but now Rogers and other officers are glad for GPS directions that can not only get them to a scene quickly but keep dispatch aware of their location.

Rogers also sees much younger recruits than in years past. She started when she was 28, but now she routinely sees officers as young as 20 join the force. Some of these new recruits come in with preconceived and romantic ideas of what police work is really all about, leading to premature burnout in just a couple of years —sooner than she ever saw before.

“This job is not for everyone. When the rubber meets the road it is totally different. They get stressed out a lot quicker than we did,” she said.

Rogers misses knowing the community in the intimate way she used to. There are less foot patrols, so officers don’t always develop the relationships with people in the neighborhoods they are policing like when she first started. Officers are also busier than ever these days, so developing strong community ties is harder. But she and her fellow officers are dedicated to the beats they work, and they are continually working hard to create and maintain those important connections.

“Community policing is what we do; it is what we’ve always done. Without the community, we can’t solve these crimes. You have to have a relationship with them,” she said.

An important change that Rogers has been a part of is the greater acceptance of women in the police department. When she first started, her field-training officer told her that he didn’t believe that women should be cops. He was concerned because he felt that women “just want to go inside the building” rather than work the streets.

Other officers used to tease her and call her “Susie social worker” and tell her she didn’t belong. But she didn’t let it get her down. She knew she could do her job and do it well, and her social work background has been an asset to her as a police officer.

Rogers may be empathetic and caring but she’s also one tough cop who is no stranger to hard work as well as danger.

Rogers worked in both the Goodman and Clinton sections of Rochester and experienced every emotion on the job from exhilaration and excitement to downright fear. Once, early in her career, she attended a call for a hostage situation. A man with an uzi was holding a woman hostage. As she took cover behind her car door, she thought to herself, “I could be shot, this is the real deal.”

Not too long after that she learned to quickly get into “cop mode” that is all about safety: the safety of the public, other officers, and herself. A couple of times, though, that mode couldn’t protect her, emotionally, from some difficult situations.

When she was called to a house party where shots had been fired she was in complete “cop mode” since she was the supervisor at the scene. But when she heard that fellow officers had a teenager with the same name as her son and matching his description in their car, she stopped examining the building for bullet holes and ran outside to check on the young man. It wasn’t him, but for a brief minute she had to turn “cop mode” into “mom mode.”

Perhaps the most difficult call Rogers ever attended was the scene of Rochester’s well-known Red Devil Murders in 1999. When she first heard dispatch say that someone had murdered two innocent children, she couldn’t believe it was true. But she was one of the first at the crime scene and saw first-hand the carnage Jose Santiago had left in his wake.

But for every brutal or frightening crime scene she encountered, there were also many exciting and happy moments, and she has touched many lives.

Rogers has always enjoyed working with children and teens and one of her favorite duties was working with kids through the D.A.R.E. program, teaching them about the dangers of drugs and violence.

“I still have people coming up to me saying, ‘Hey, you were my D.A.R.E. officer!’ I took over a classroom for a few weeks and made a connection,” Rogers said.

Former students aren’t the only ones happy to know Rogers. Her colleagues genuinely like having her in the department and look forward to their time with her. Recruitment officer Christine Wilson particularly enjoys working with Rogers.

“Sgt. Rogers is awesome! She has your best interest at all times. She’s very supportive in helping you achieve your career goals and personal goals as well. She’s a great asset to the department and I’m grateful to have her as a friend and supervisor,” Wilson said.

Deputy chief La’Ron D. Singletary said Rogers “has a heart of gold and would do anything for anyone that she comes into contact with. Darlene is fair, thoughtful, and extremely personable, where people take an automatic liking toward her.  Darlene is well respected by her colleagues within the Rochester Police Department.”

Rogers doesn’t regret leaving social work behind in favor of police work. She’s enjoyed the last 30 years as a Rochester police officer and strongly believes that “sometimes you don’t choose a career; a career chooses you.”

Asked when she might retire, she said her goal is to hit that 30-year mark in December, then “play it by ear.” When she does retire, she plans to keep busy volunteering and helping the community in any way she can. “My passion is helping people,” she said.

She has hope for the future of the Rochester Police Department, too, and said “that some of the changes we’re making now will put us where we need to be as far as making sure officers don’t forget about community policing.”