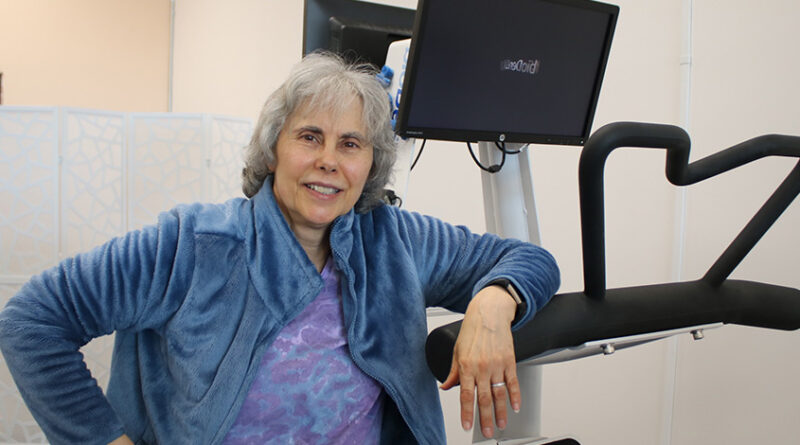 Liz Lehmann is on a quiet mission to save you from the drugs and the sweaty days at the gym.

Do you have osteoporosis? Osteopenia? Do these bone diseases or dispositions run in your family?

She may have just the help you need, in a manner you probably don’t expect.

It’s a place where she promises to help you increase the internal strength in your bones, which in turn leads to increases in muscle mass, which in turn causes your A1C to drop.

Lehmann uses a bioDensity machine that stresses your bones to make them grow by stimulating all the major muscle groups through four exercises: chest press, leg press, core pull and vertical lift. The entire process takes about 10 minutes once a week. There’s no need to wear gym clothes because chances are you won’t break a sweat.

And your joints shouldn’t hurt. The machine forces safe and precise compressive movements that will not exceed your physical limits.

“This is all based on Julius Wolff’s Law, which has been around since the 1880s,” said Lehmann.

Wolff said bones build when they are stressed or a load is placed on them. You stress your bones when you lift weights in a gym; you also stress your joints and muscles.

“After completing a bioDensity session you may feel like you’ve completed physical work. You will feel warm from increased blood circulation and from work completed by the muscles,” Lehmann said. “Within 24 hours you may feel muscular fatigue, but you are not likely to feel soreness. Since the movements only require five seconds of maximal work, your body will not produce the by-products which cause muscle soreness.”

Lehmann said the impetus for the machine came from Jon Jaquish. “He was looking for something for his Ph.D. thesis when his mother called him and said she had just gotten diagnosed with osteoporosis. The light bulb went off and he said, ‘That’s my thesis.’ He discovered that gymnasts have the best bones because they’re jumping up and down and they have the worst joints because they’re jumping up and down.

“The problem was how to stress the bones in a way that didn’t affect the joints,” she said. “He discovered bones and muscles are similar and different – both have the use-it-or-lose-it process. If you exercise, it gets stronger; if you don’t, it gets weaker. Bones are no different than muscles in that respect. To build muscles you have to do a lot of workouts a couple times a week and you have to have a rest period of a day or two in between so the muscles have a chance to recover.

“Bones are alike and different in that respect: they do need to be stressed to get stronger. But with the bioDensity machine, it only requires five seconds to be stressed at the right amount of pressure and the recovery time is a week for bones. With muscles, if you don’t go to the gym for a few weeks, you’re back to square one. With bones, there’s more of a tail — the recovery process is longer and the fade-off process is longer.”

She said many clients come to Bone Gym to get off the drugs they’re taking for osteoporosis or osteopenia.

“I was one of the first people to go there,” said Virginia, who asked us not to use her last name. “I’d had my DEXA [bone density] scan and my doctor said I had severe osteoporosis and sent me to a specialist — and all she wanted to talk to me about was drugs. I don’t want to do drugs. I got really frustrated and upset.

“So, I started doing my own research. I found some supplements I could take and found out about the concept of what Liz is doing at Bone Gym…and then found out she was in Penfield. I thought, ‘This is a chance for me.’”

Virginia said her visits to the gym are usually 15-20 minutes, “more if we talk a little bit: Liz is really nice and supportive.” Virginia has stayed away from drugs and is feeling stronger.

“Liz has helped me feel more optimistic and hopeful than the doctors,” she said.

The road to Bone Gym

Lehmann took a circuitous route to being the owner of a Bone Gym – the next nearest such facility is in Rome.

She grew up in Irondequoit, met her husband at a high school reunion.

“He’s a retired electrical engineer who did technical sales. I have a master’s degree in computer science. One of the reasons he married me is because I can talk engineer,” she said.

Her bachelor’s degree is in polymer chemistry, but when her employer, Xerox, was looking to train computer programmers, she signed up and became a leader for the collegiate program.

“I would tell groups, ‘This is really hard. Say goodbye to your kids for two years, buy a whole bunch of frozen dinners and take a time-management class because you’re going to need it,” she said.

She had been warned ahead of time about the EBT — everything but thesis — problem of the program. Doing a job fulltime and getting a master’s degree takes a toll and Lehmann was told about the folks who got the coursework done but were too pooped to finish the thesis. So, she used her project-management skills and an independent study course to begin her thesis as she started the master’s program — and it worked perfectly. When her classes were done, so was her thesis.

From there she did programming, developed her own browser before its time — “I built Netscape, for all intents and purposes,” she said — and worked contract and short-term jobs. She used her artistic ability to develop websites, but there was a problem: “I wanted to do independent websites, but India is cheaper.”

And recently, she’s learned another lesson: “In the computer field, they look askance at you if you’re over 40: it’s a very ageist and sexist field,” she said.

Lehmann looked at something that was her, something close to her heart. She had rented out half her duplex in the city for years and learned a lot of fix-up skills. She put all of them to work in building out the layout of the Bone Gym after doing reams of research, getting help from SCORE of Greater Rochester to find a mentor and develop a business plan.

And Bone Gym was born.

Sessions at Bone Gym starts with a free one-hour introduction, then follow-up work-outs of about 15 minutes each week. Those sessions have some support from Excellus. Lehmann believes Siver&Fit will also cover some of the costs, which now run $139 per month with a 20% discount for a client who brings a “bone buddy.”