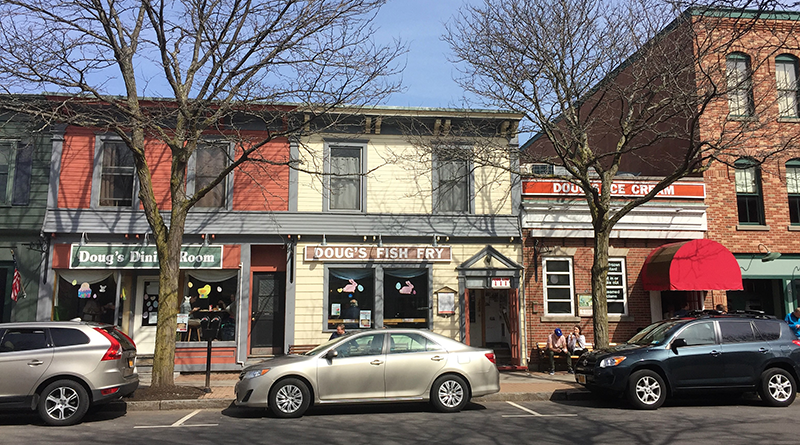 Skaneateles restaurant serves some of the best fish in Upstate

Upstate New York’s fanaticism over fried fish is one of this state’s most interesting culinary questions. What started as early Catholic immigrants dining on fried fish on Fridays during Lent has now transcended religion and season and for good reason. Fried fish is crazy good.

When it comes to places frying fish year-round, Doug’s Fish Fry is among the most popular in Upstate New York. Doug’s has been frying fillets of scrod — a general classification for whitefish such as cod or haddock — since 1982 from its perch a block from Skaneateles Lake.

Framed newspaper clippings from as far back as the restaurant’s opening, some yellowed by age, and photos of fans posing with a Doug’s Fish Fry bumper sticker line the wood-paneled walls. A model train runs the circumference of the restaurant on a track suspended from the ceiling.

Among the other notable points of décor is the large fish tank near the counter where customers order their meals. While they watched their finned brethren suffer an unfortunate fate, my fortune was quite high after hearing my name called over the loudspeaker and a tray filled with fried seafood and sides presented before me.

Like most fried fish sandwiches in Upstate New York, the fish fillets was comically large — easily twice the size of the sesame seed bun it was served upon. The skinless fillets; firm but tender with pearl white flesh, tasted fresh and clean — evidence that the oil in the fryer is changed frequently.

This is not a grab-and-go sandwich built for holding with one hand while driving with the other. The overhanging portion of the filet will break off under its own weight. The house-made tartar sauce, while a deliciously zippy and welcome component, does little favors with keeping the sandwich together.

Like the fish, the fried shrimp are lightly coated in breading, which not only keeps the fresh seafood in the spotlight, but assures me that I have enough room to polish off the generous portion of onion rings served alongside. Far from those minced onion abominations found in the drive-thru lane, the rings at Doug’s are cut from whole onions and fried fresh. They’re good with ketchup, but better with Doug’s signature honey curry dipping sauce. Then again, everything is better with Doug’s honey curry dipping sauce. Fortunately, Doug’s sells pints of the stuff for $4.

With a menu so devoted to fried food, it’s easy to forget that a well-made coleslaw is an essential part of a proper fish fry. At Doug’s, the coleslaw is a star. The finely-shredded blend of what appears to be red and green cabbage and carrots are mixed with a creamy, milky dressing with plenty of vinegar punch and just a touch of sweetness. The black pepper and celery seed tie it all together.

French fries. Surely, if McDonald’s can serve billions of pounds of French fries each year, making a batch of good fries can’t be too hard. Wrong.

The chunky fries at Doug’s are cut thick and served skin-on for a boost of potato flavor. However, they are soft — a frequent scourge of freshly-cut fries — and a bit bland. It’s nothing a little honey curry sauce can’t fix, but next time, I’ll order them well-done, or opt instead for the superior onion rings.

The steamed clams, like all the food at Doug’s, were presented simply on a cardboard plate, with a cup of melted butter and oyster crackers on the side. It’s simple: Clams and butter. Just the simple pleasure of a burst of sea, salt and brininess to make it feel like it’s summer, no matter the season.

Doug’s has a stack of bumper stickers by the cash register that read “Eat fish, eat scallops, eat clams, live longer, love longer, last longer.” While I’m skeptical that eating fried seafood is the secret to a long life, it’s certainly the key to a happy life.