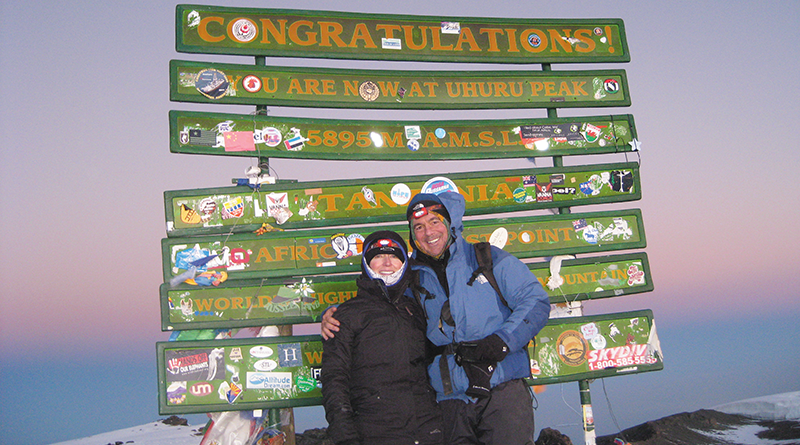 Local boomers redefining what it means to grow older

Kevin Flynn never set out to climb mountains. A backpacking trip through Adirondack Park with two buddies in his youth led him to fall in love with the scenery from a high vantage point.

But he also fell in love with the challenge of keeping one foot in front of the other to make it up each crest. Eventually, his drive led him to bigger mountains.

“I was really lucky. I just kind of mistakenly fell into these passions,” Flynn said.

His passion led him to the highest points of the world — like Mount Everest — in his 40s. It took two attempts to ascend the world’s highest peak, which reaches nearly five-and-a-half miles above Nepal.

Over the span of 15 years, Flynn, 57, climbed the seven highest mountains on the seven continents. It’s a physically and mentally demanding task, he said, noting, “Your mind can quit before your body.

“But over time you realize you try to even out the highs and lows a little bit and, mentally, just work on managing your mind.”

While a person climbing Everest may be rare, being an active adult with a diversity of interests is not. Indeed, baby boomers are redefining what it means to grow older.

“Perhaps at some point in the past, people imagine a 60-year-old person as someone sitting at home and not doing much other than taking medications and reading the paper,” said physician Bobby Khan of Thompson Health’s Shortsville Family Practice. “This has surely changed over the last decade, and 55-to-60-year-old people are often physically active and engaged in living fulfilling lives.”

Women are still living longer than men. By age 65, they are expected to live another 20.6 years, according to the National Center for Health Statistics. Sixty-five-year old men can expect to see another 18 years. At 65, both genders combined have a life expectancy of 19.4 years.

While the country’s 76 million baby boomers are enjoying longer lives, it doesn’t mean they are necessarily leading healthier lives. Incidences of hypertension, obesity, high cholesterol and diabetes slightly increased in people aged 55-64 from 2002 to 2012, according to a 2015 report by the U.S. Centers for Disease Control and Prevention.

“Therefore, people need to take the proper preventive measures during their lives to ensure their health remains in top shape and they not only live longer, but live it with a good quality of life,” Khan said.

The biggest way to stay youthful, according to Khan, is to follow a healthy diet and to exercise. The importance of both can’t be overstated, he said.

“It is the key to prevention of the most debilitating health problems common to the age group, such as hypertension, diabetes, and high cholesterol,” he said.

Staying physically and mentally fit is a priority for older adults, according to the National Council on Aging. In its 2015 United States of Aging Survey, which surveyed 1,650 people aged 60 and up, 82 percent reported exercising at least once a week. That’s up from 75 percent in 2014 and 72 percent in 2013.

Maintaining mental health is a priority, too, according to survey respondents. Fifty-three percent reported that the key is keeping a positive attitude, while 50 percent and 49 percent say it is due to regular exercise and a healthy diet, respectively.

“I have seen several patients in their 50s who exercise harder and longer than many in their 30s, engage in outdoor activities often, such as hiking, hunting, and are using social media just as effectively as their younger counterparts,” Khan said. “Fifty-five is certainly the new 40.”

According to estimates released in June 2016 by the U.S. Census Bureau, baby boomers — those born between 1946 and 1964 — represent the second largest segment of the population. Millennials, those who were between the ages of 18 and 35 in 2015, number 75.4 million.

Still, the sheer number of baby boomers influences everything from culture and advertising to the very perception of aging, according to Margaret Newland, who teaches yoga to people of all ages at her studio in Geneva, and is an adjunct faculty member of Finger Lakes Community College. There, she teaches physical education and in the social sciences department.

“I think, overall, as health care has improved, this idea of longevity has changed, that you can be healthier the older you get versus the older model where around 50 you start to slow down and head toward the rocking chair,” Newland said.

Newland, who is 52, said, in general, baby boomers are focused more on maintaining their health rather than preserving their youth. Many develop a health problem or watch a loved one suffer through one and make the decision to invest in their future health, she said.

“People have motivation and life within them to stay active,” she said. “People want to live their lives and be healthy and vital.”

She’s also noticed the trend of the lifelong learner — people of all ages developing new interests. Newland, for example, resumed piano lessons last year — an instrument she hasn’t played since she was a girl. She’s run four marathons. She is also learning how to snowboard.

“At any point you want to learn something new those opportunities should be there,” she said. “We know from neuroscience that as you get older the brain starts to get set in its ways. If you’re not using something, you tend to lose it.”

Trying something new is a great way to build up resiliency skills, reduce stress and develop a sense of accomplishment, Newland said.

Khan agreed, but cautioned that taking on too much can create stress rather than reduce it.

“As with most things regarding good health, moderation is key,” he said.

Getting out of her comfort zone has helped Jeanie Grimm stay young.

She works out at a boot camp with others in her age group. They push sleds, lift weights and box, “and do other things I didn’t do when I was younger,” she said.

Grimm, 57, said while her age group may be less active overall because they drive everywhere or are less likely to mow their lawns, walk their dogs, and other physical activities, she believes her peers are more involved in “true exercise,” like taking classes and belonging to a gym. She also takes Pilates classes.

“Being physically strong helps me to feel mentally strong, too,” she said.

The Canandaigua resident said volunteering has kept her youthful, too. She rescues and trains pit bulls and has served on the Canandaigua City School District Board of Education for 12 years. She also enjoys knitting, crocheting, quilting, baking and reading.

“Aging well is a priority for me,” said Grimm.

Naturally an introvert, Grimm said she challenges herself to try new things. For example, she gave a book talk at Wood Library in Canandaigua last year.

“I’m certainly more deliberate about being engaged in deeper ways than when I was younger,” Grimm said. “Some of that has to do with opportunity. I’ve lived in cities before moving to Canandaigua and always on or near college campuses where opportunities were always at my doorstep.”

When her youngest child went to kindergarten, Grimm was offered a teaching job at her preschool and she’s worked there for the last 14 years. Four years ago, she joined a friend who runs a college counseling business.

“I love being part of this important part of teenagers’ lives and have no immediate plans to retire from it,” she said.

What is her advice to counterparts who may be less active or want to find new hobbies?

“Find something you like. Try new things. Celebrate your smallest victories,” she said.

Kevin Flynn agrees. To stay fit, he boxes, plays pick-up basketball, runs, and lifts weights. The variety of his exercise routine keeps him interested, he said.

Flynn works full-time as a partner at Martino Flynn, an advertising agency in Bushnell’s Basin. He also released a book in 2007 that he wrote with former Democrat & Chronicle reporter and outdoors enthusiast Gary Fallesen titled “Mount Everest: Confessions of an Amateur Peak Bagger.”

“I think when you’re passionate about something, you find the time, you make the time, to make things happen,” he said. “It’s more about your own choices. I’m also fortunate to be surrounded by a lot of really great people, so the ability to take some of that time away and know things are covered is great.”

The man who didn’t take an airplane until he was 25 now flies his own plane to meet with clients across the state.

“I used to be a white knuckle flyer and now I have my own plane,” Flynn said, chuckling.

Setting goals is critical, too, Flynn said. The Adirondacks remain a favorite spot for him and his wife, Maggie, who are both “46ers,” meaning they have climbed the park’s 46 tallest peaks. What’s next on their list? It’s Patagonia, a mountainous region in South America.

“People can do so much more than they allow themselves to do,” Flynn said.