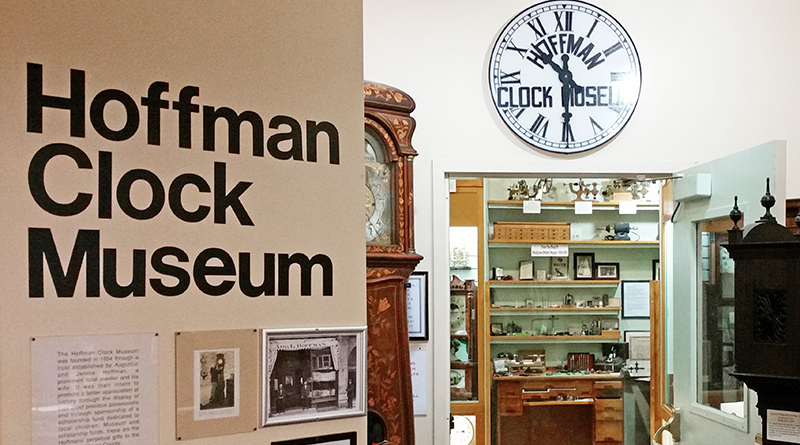 Husband and wife team cares for more than 400 clocks, which are on display at Hoffman Clock Museum

Despite its 400 clocks on display, the Hoffman Clock Museum in Newark is the kind of place where it’s easy to lose track of time.

Minutes slip away swiftly as one wanders through its displays of floor to ceiling clocks and glass-fronted cases of watches.

The museum boasts one of the largest collections of New York state clocks in the U.S. and many from around the globe. It draws visitors that included a student who drove up from New York City specifically to view its rare timepieces.

Curator and clock repairman Eric Hooker, 76, and his wife, Doris, 70, love showing visitors around the museum, which is housed in a wing of the Newark Public Library. The Fairport residents tend the clocks Tuesday mornings, winding, cleaning and repairing clocks.

“I’ve been playing with clocks since the early 70s,” Eric said.

But showing visitors around appears to be the most fun part of their job. They know the history behind the timepieces, the stories of when and where and why they were made and how they became part of the collection. Some of the clocks on display have been lent to the museum. Most have been either donated to the museum or were purchased by the organization to enhance the collection. But all have a story.

Eric Hooker said that some people have donated vintage clocks that are neither rare nor valuable; however, he displays them because people like knowing their grandmother’s clock will be appreciated by others and the timepieces represent part of the history of clocks.

“I have a serious passion for clocks and the preservation of antique clocks,” he said. “The museum is a way to give back. I’ve had a good life and I’ve been able to do a lot. This is a way to preserve this collection for future generations. I hope there will be someone to carry on with it after I’m gone.”

He worked as an electrical contractor and started a clock repair business in Fairport to stay busy during retirement. The business boomed, so Eric began turning work away, though he still works on high-end clocks. He took the volunteer position at the museum in 2008.

Doris retired 10 years ago and has been painting landscapes and abstracts. She occasionally uses her artistic flair to augment Eric’s clock restoration when a painted clock requires touching up such as gold leaf accents or frosted glass.

Doris paints outdoors and in her home studio. She displays and sells her artwork in shows with the Penfield Art Association and at the Art Center of Yates County in Penn Yan.

The Hoffman Foundation sponsors the museum and displays many clocks that belonged to Augustus and Jennie Hoffman. A jeweler, Hoffman collected clocks for decades.

The museum isn’t the only place where Eric can enjoy clocks. He personally owns about 1,000 timepieces.

“I have become very tolerant over the years about storing and displaying clocks in our home,” Doris said.

She began tagging along on his museum visits to help winding clocks, but now helps educated visitors on the displays. She often helps children punch their souvenir timecard in the circa 1910 Time Stamp Clock by International Time Recorder Company.

“I enjoy meeting the new people who come in the museum who are enthralled by what they see,” Doris said.

The friendships they’ve formed make the time they spend at the museum even sweeter.

In the corner of the museum rests a clock repair desk, fully outfitted with vintage tools and framed by shelves. It’s not Eric’s. It belonged to master watchmaker, Wladyslaw “Walter” Wojnas, the man behind one of Eric’s favorite “clock stories” connected to the museum.

The donor had received Wojnas’ entire estate but wasn’t sure what to do with the watch shop. He asked Eric if he wanted it for the museum.

Wojnas lived in his native Poland during the Nazi occupation. While he was away from home, the Germans killed everyone in his village. They sent Wojnas to a forced labor camp where he was assigned to learn watch making to take care of officers’ timepieces. After the war, Wojnas became a successful watch repairman in America. He and his wife befriended his building’s plumber and his wife.

The couples had no children, and became very close. In 2009, Wojnas died, leaving his friend all his possessions, including the watch shop. He offered it to the Hoffman Museum on one stipulation: Eric had to memorialize Wojnas with his items.

The collection and equipment filled four vans. The Hookers set up the display to honor Wojnas. They sold the excess at an auction and gave the proceeds to Wojnas’ friend.

The Hookers hope that the museum continues to represent more than just a collection of timepieces and antiquities, but the people and places symbolized by them.

The museum is housed in a wing of the Newark Public Library, Mason Street, Newark, NY 14513.