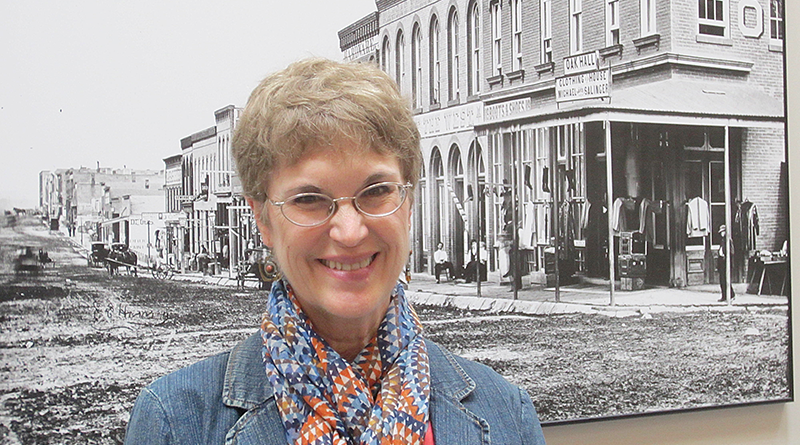 ‘The Truth About Daniel’ is a book about the controversial brother of the woman who helped secure the right to vote for women. It focuses on relationships and maintaining a strong family bond in the face of disagreement

She didn’t know it at the time, but the words of Jeanne Gehret’s high school English teacher stuck with her — so much so, they were the foundation for most of her life’s work.

“My high school English teacher advised us to ‘pray for intellectual curiosity.’ It must have worked because it’s natural for me to wonder what makes people tick and how they grow after surviving heartbreaking events,” said Gehret, 63, of Fairport.

Her inspiration to pray for curiosity led her to follow her dreams. From her earliest mission as a youth minister and religious studies teacher to a public relations executive, writer, author, Susan B. Anthony impersonator, naturopath, reflexologist and massage therapist, Gehret answered her calls on what she refers to as her “travel itinerary” of life.

“My life’s path has been fulfilling my purpose,” Gehret said. “When I ceased to be a youth minister it broke my heart, but it didn’t work with my lifestyle and I decided I would always try to be a light in the world.”

That light especially shines through her writing, which Gehret said has always been about topics that make life better for people. The steady mission brought her to her latest publication and first book written for adults, “The Truth About Daniel,” a story about the brother of suffragist heroine Susan B. Anthony, published this January.

The book, reflecting her goal of helping to make life better for others, is ironically timely in the undercurrent of turmoil in our country today, she said. It explores the life of Daniel Reed Anthony who, according to Gehret, was a controversial person. She was inspired to explore his historical significance, traveling as far as Leavenworth, Kan., and Martha’s Vineyard, Mass. for research and documentation.

“In the years I have known Jeanne Gehret, I have come to greatly admire her diligence and perseverance in detailed research and historical writing,” said Mary Ann Sachse Brown, president of the Leavenworth County Historical Society. “Her enthusiasm for the subject matter is transferred to her readers, who, once they begin one of her books, cannot put it down.”

This is the second book Gehret has written around the life of Susan B. Anthony. Her first book “Susan B. Anthony and Justice For All,” a biography for children about the reformer, was published in 1994 and can be found in more than 100 classrooms throughout the Rochester City School District.

Gehret’s original fascination with the local historical figure became apparent in 1992 while on a book tour in Massachusetts for one of her earlier published books, “I’m Somebody Too,” a children’s book about codependence. She visited the Louisa May Alcott house in Concord and realized another historically prominent woman’s house was only a few miles from her in Rochester. From that moment on her intellectual curiosity about Susan B. Anthony was piqued.

“When I returned to Rochester I went to the Susan B. Anthony House, was hooked immediately and became a docent,” said Gehret. “I started reading everything I could about her, then realized there weren’t any good children’s books on her so I decided to fill the gap and write one.”

“I saw her performance at the Adams, Mass., library in 2015,” said Eric Anthony of Boston, a descendant of Susan B. Anthony. “Her rendition of Anthony was accurate both from my knowledge of my famous relative and from certain prominent characteristics — that upright stance of stoic resolve in my own family.”

After finding a dearth of information about Anthony’s brother Daniel, she moved forward with a book about his story.

“This new book on Daniel Reed Anthony, while full of history, is really about relationships and family, and exploring questions about maintaining a strong family bond even when disagreeing,” Gehret said. “In part, those questions are answered by the book’s dedication, ‘To family, who pester you until you get it right.’”

No stranger to getting it right, Gehret found ways to cope and overcome her own life’s challenges while raising a son with a learning disability — a common but unrecognized issue during her son’s formative years. When she discovered in 1988 that over a million other families faced a similar situation, she decided to write about it.

In 1990 she wrote and published her first book, “The Don’t-Give-Up Kid and Learning Disabilities,” after forming her own publishing company, Verbal Image Press. The enormous demand for that book actually paved the way for the Library of Congress to create a new classification for children’s books on learning disabilities, according to Gehret, one of the biggest thrills of her life.

Five children’s titles and two decades later, Verbal Image Press has distributed over 110,000 books all over the world. In 2009 she also received the national Mom’s Choice Award.

“I love getting to the heart of someone and trying to see things through their eyes and explain who and what they are all about to someone else,” Gehret said.

The motivation behind her action is visible through the twists and turns of her life’s “travel itinerary.” In addition to her career as a children’s literature author and publisher, she holds a bachelor’s degree in religious studies from the University of Toronto, a master’s in theology from St. Bernard’s Seminary and a doctorate of naturopathy from Clayton College. She is also a certified reflexologist, a certified massage therapist and currently teaches an aquatic fitness class for seniors. Each Friday, she volunteers at The Tool Thrift Shop in Fairport, a charitable enterprise she co-founded that raises money to help seniors stay in their homes.

“Jeanne is one of the most interesting people I know,” said Amelia Seiler, a friend from Wake Forest, N.C. “She is a multitalented woman distinguished by her zeal for life, her compassion for those in need, and her scholarly approach to everything she undertakes.”

In her spare time Gehret also enjoys dancing in the group English Country Dance of Rochester with Jon Gehret, her husband of 41 years, and dancing in the Meryton Assembly, performing at local festivals, historical venues, colleges and libraries. Mother of two grown children, Gehret says she never lost sight of what’s in her own heart while chronicling the lives of others.

“I’m inspired by the quote, ‘Be the change that you want to see in the world,’ she said. “If I see a need and know that I can help fill it, I swing into action, often by writing but sometimes just by being a friend.”

How to Find ‘The Truth About Daniel’

For more information on Jeanne Gehret’s book about Susan B. Anthony and her latest book “The Truth About Daniel,” visit www.susanbanthonyfamily.com.