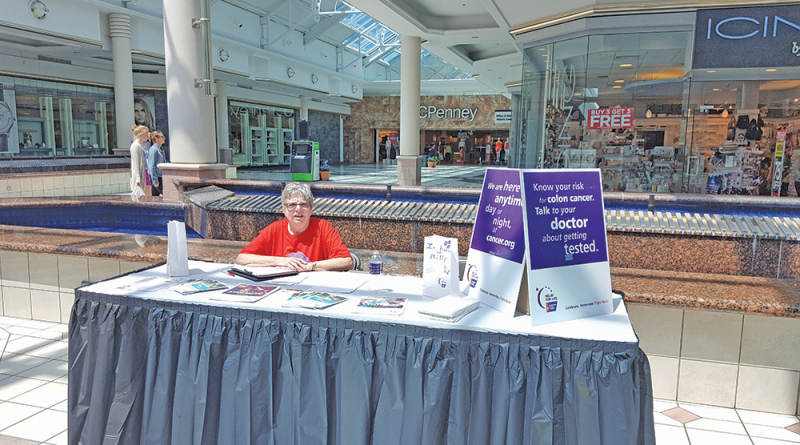 ‘Mega-volunteer’ Jean Laitenberger has giving back in her blood

Sometimes taking something personal is a good thing.

When Jean Laitenberger’s father had cancer spread through his toes, liver, spleen, brain and lung, she knew she couldn’t take care of him full time by herself. Unfortunately, decades ago when he was sick, there was little to no hospice care around the area.

“I just felt something needed to be done,” said Laitenberger, 72.

That yearning spirit of attacking a problem when there is need has become one of the pillars of her volunteer career.

Laitenberger’s contributions to the community include being an active member of Saint Patrick’s Church since 1969 and the Victor-Farmington Volunteer Ambulance Corp. for 27 years while acting as director of training for two years and then president for two years.

“I do a lot, I know, but it is all because I enjoy it so much. Friends joke that ‘volunteer’ should literally be my middle name,” said Laitenberger. “I have always felt the art of volunteering, and yes I call it an art, because it is really dying right now. I think people should give back and I want to live by example.”

While working a full-time job, Laitenberger has always enjoyed the opportunities to help other people. This trait is something she has proudly passed onto her son, Jay, a teacher and active member of the Boy Scouts of America.

“I was always seeing Jean volunteering at community events,” said Mitch Donovan, executive director of the Victor Chamber of Commerce. “I used to say, ‘You’re everywhere!’ When I saw the breadth of her volunteer initiatives over the years, I was amazed.”

Laitenberger has continued to support the growth of programs to benefit the citizens of the Victor and Farmington areas. Her passion for volunteerism has been a significant family value that she has also passed on to her three grandchildren. Laitenberger has been a resident of Victor since 1969 with two sons graduating from Victor Central School.

While her children were growing up, she saw a need in the community to help. The journey began with volunteering at the Victor-Farmington Ambulance Corps, where she took an emergency medical technician course. At that time, the organization was 100 percent volunteers.

“It was a wonderful experience because you could take our children there and they could see all the valuable work that was being done. Also, if we had to go out on an emergency, there was always someone there to watch them,” said Laitenberger. “All the mothers got together and it really became a large community.”

She continued to work there even as her children were older, even working her way to vice president of the Ambulance Corps.

Her father’s sickness did become a catalyst for the change she believed was necessary in the Victor area. In 1996, the Serenity House board was formed and charged with the responsibility of raising capital necessary to establish a conveniently located, homelike facility where two residents and their families can receive 24-hour care at no cost.

In April 1999, the dream of a comfort care home became a reality when their first patient was admitted.

“I was on the original group that looked into getting a hospice started in Victor,” said Laitenberger. “When my dad passed away from cancer, there wasn’t really any in the Rochester area. Since that time, we have cared for 100 residents and their families from several surrounding towns including Bloomfield, Canandaigua, Farmington, Geneva, Honeoye, Penn Yan, Rush, Shortsville, Victor, Webster, and several other communities with referrals from Ontario-Yates Hospice, Genesee Region Home Care, area hospitals and family members.

“The facility is a ranch home on four tranquil acres featuring orchards, wildlife and gardens. It has all the comforts of home: separate bedrooms for each resident, guest room, and a commonly shared living room and kitchen where families are welcome to cook, share meals and relax as you would at home.”

Serenity House is supported by contributions of people and businesses in the surrounding communities, by donations, memorials, yearly fundraisers, and various grants.

Laitenberger is amazed by what it all has become. The more she thinks about the situation, it was more than just her father’s sickness that brought the volunteer bug into her life. He was also a man who volunteered at his church and other areas.

“He was a hardworking man and still found time to do extra work to help others,” said Laitenberger. “He got involved in these things young.”