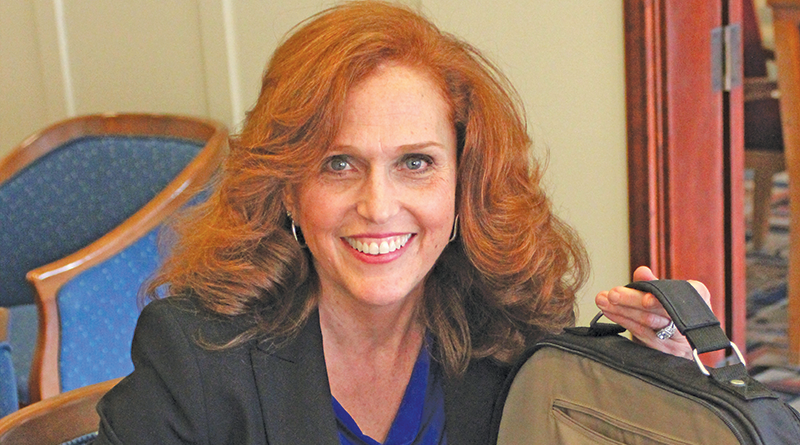 We all know someone like this. An elderly man or woman, someone who lives in that house over there, someone we seldom see.

We might check on them every so often, but maybe not often enough. We’re all too busy.

Perhaps you know this elderly neighbor doesn’t have much family in the area.

And you haven’t seen the car out of the garage in a long, long time. In fact, you’re not sure they drive anymore.

And if you think about it, you might wonder if they’re sick or ill — and that’s why you haven’t seen them.

Maybe you wonder, “How do they get to a doctor?”

Brenda Baratta, 55, of Webster, thinks about that all the time.

And she’s a doctor.

But in the midst of thinking about whether those nice folks who have lived in that house for years need medical care, she’s driving her SUV over there, and she’s going to stop in and make a house call.

That’s what she does. She’s a physician who makes house calls, part of the physician house calls program hosted by Jewish Senior Life in Rochester.

She’s on the road at least three days a week, sees all of her 140 patients at least once a month — some more often when needed — and spends between 40 minutes to an hour with each patient.

“We take regular insurance,” she said. “I’m not a concierge doctor. What I do is completely within the bounds of general medical billing — no extra charges.”

Her target population is something baby boomers know very well: the frail elderly who are homebound and have no means to get to a doctor. The only criteria to be seen by Baratta are that you’re over 65 and have some significant impediment to seeing a doctor.

Don’t worry about finding her — she’ll come to you.

Her territory is eastern Monroe County, servings parts of Rochester and points east.

And she wants people to know about the service. Her goal is 200 patients.

What exactly does she provide?

Through the Jewish Senior Life Physician House Calls program, Baratta has on her team a nurse practitioner, a registered nurse, a caseworker, a clinical nurse psychologist, and an office secretary. She brings a significant range of services into a patient’s home with her — primary medical care, coordination of care with other providers, review of medications and methods of taking them, assessing a patient’s abilities to perform daily activities, and care-planning. It’s a one-stop-shop that comes to you.

And time. She spends time with each patient.

Baratta came to this practice about a year ago. A University of Rochester Medical School graduate, she and her husband, Tony, an enterologist, found one another in the first year of med school, and they got married in the third year. First daughter Vanessa — now a doctor — was born as Brenda finished her residency at Genesee Hospital, where she was in the emergency room.

For the next 25 years, Baratta raised two daughters — Julianna, now at Dartmouth, followed Vanessa — and worked for Lifetime Health as the primary care physician wherever they needed her. And for all those years, she never had her own “panel of patients.”

That changed when Jewish Senior Life offered her the job.

She’s on the road at least three days a week, sees all of her 140 patients at least once a month and spends between 40 minutes to an hour with each patient. Half of Baratta’s patients are over 95.

“It was right at the time I had already transitioned to using electronic medical records in my office through Lifetime,” she said. “I was feeling the disconnect already. I had a 15-minute visit with a patient, but only five minutes face-to-face time and 10 minutes working with the electronic record. That’s kind of the standard in the medical community. That’s the way it is for doctors who are based in an office. It just seemed so frustrating for a primary care doctor.”

Time of the essence

Time was the difference. Time to see a patient at home. Time to discuss things. Time to answer questions. Time to make sure the patient’s understanding is high and anxiety low.

“One of the things we especially do in the physicians house call program is that when we’re dealing with an elderly patient, we take the time to hear, connecting, getting to know what their home situations are, what affects them, their thoughts,” she said. “I couldn’t establish that connection in the short time we have, many times, in the office.”

She invests the time to personally coordinate many facets of care for a patient. “I just thought, ‘This is exactly the way I want to practice medicine,’” she said.

“I knock on their door, walk into their homes. I really get the flavor of a patient,” she said. “I’m in their home. You cannot realize how special that is as a doctor. It’s so unique to have that insight into how a person lives. It really impacts their life, their health, impacts what I can do for them and what obstacles they have and how can I help them.

“What kind of services do they need in that home? I’m there to help keep that patient in their home. That can’t always be done in a doctor’s office. It’s just too limiting to figure that out in the short period of time.

Half of Baratta’s patients are over 95. Many are still as independent as they can be and many are in assisted living.

Once someone transitions to skilled nursing care, he or she ceases to be her patients. The other half of her patients are aged 85 to 95.

This population of the elderly can present some daunting issues to the people trying to take care of them.

“If I have someone with any mental health issues, I have a clinical nurse psychologist who will evaluate a patient at home. I have a lot of patients who have dementia and behavioral issues that have to be addressed by a clinical nurse psychologist,” she said. “I have a social worker that goes to the home. The patient may need more nursing care or be involved in a community program, or assisted living or other care. The social worker helps facilitate that. I help families with transition of care, and levels of care, because it’s complicated.”

She has also seen a huge shift in end-of-life care and planning because it is something she is involved with often.

“There are so many decisions an older patient has to make that they never believed they would have to deal with. I have to help them navigate that. They have choices. It becomes confusing for family members to make these decisions. It takes time and patience to explain it, time and patience to help people have the end of their lives played out the way they choose. That was not a reality 10 years ago.

Many elderly are afraid of insulin, for instance, and Baratta ends up doing some education as well as providing support.

“I have the actual time to explain why it’s important to control your blood sugar. I will say, ‘I’ll have a nurse come out here and help you, you’re not alone, you don’t have to do this without support.’ It’s scary for an elderly patient.

“The other thing that surprised me about this practice I wasn’t anticipating that sometimes, patients make choices with their conditions and co-morbidities. They can choose to not have aggressive care. It’s OK not to have surgery. Palliative care is really important to be presented to a patient, as is hospice care. One of the first things that happened to me, I had a patient who had ALS [amyotrophic lateral sclerosis], where a patient loses all control of his body, but the brain stays active and alert.

“His religious belief did not allow him to refuse DNR [do not resuscitate],” Baratta said. “I helped him understand natural death and what it meant to choose not to have a ventilator and have end-of-life play out that way. It was a gift to his wife and to him. Sometimes helping people to check out is rewarding.”

The amount of time she spends with her patients also breeds another benefit to Baratta. Some of her patients become friends, too. One woman, a 97-year-old survivor of a concentration camp, asked the doctor to play Beethoven’s “Fur Elise” the next time she came to the assisted-living facility.

When she started with physician house calls, Baratta thought she’d be swamped.

“I thought when this started, the phone would ring off the hook,” she said. But the ramp-up has been slower than expected. She has room for a lot more patients.

“People have a difficulty with change, especially the elderly. They have their own physicians in the community and it’s difficult to change to an unknown entity,” she noted.

There are no religious mandates or affinities in the program, and although she may refer some patients who need assisted living care to the Jewish Home, “they can go to any skilled nursing facility or assisted living community,” she said.

“I believe in this program so much. If we get the patients, we’ll hire more doctors. I am so excited about this,” she added.