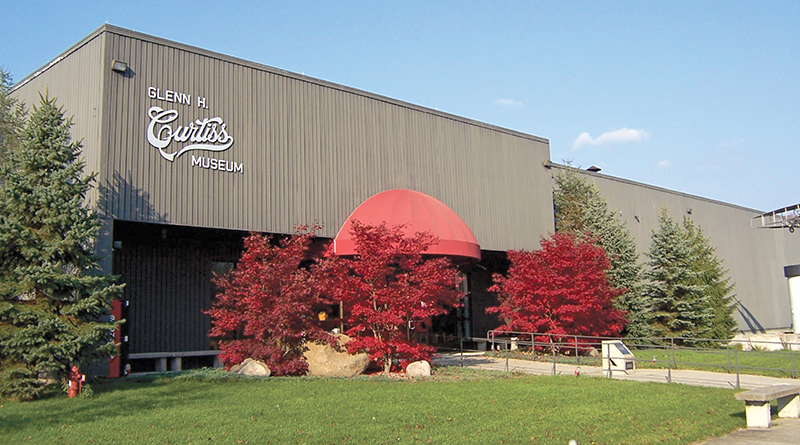 Aviation and local history on display at Curtiss Museum

The Wright brothers got modern day aviation off the ground in 1903 in Kitty Hawk, N.C. but it was Hammondsport native Glenn H. Curtiss who made the airplane a practical reality.

The contributions and accomplishments of the founder of the American aircraft industry are on display at the newly renovated Glenn H. Curtiss Museum of Aviation History on state Route 54 in the village of Hammondsport, located at the southern tip of Keuka Lake in the Finger Lakes.

An initial $1.2 million phase of renovation was completed in June. The next phase will add approximately 40,000 square feet to the building which was originally a warehouse before the museum took over in 1992.

“In many aspects it’s still evident it was built as a warehouse,” said new museum director Benjamin Johnson, who came to Hammondsport from the Springfield Museum in Springfield, Ore.

Johnson said aviation and aviation history was a “part of everything we did” when he was growing up in Nebraska and he feels fortunate to do what he loves for a vocation.

“The expansion allows us to tell our story better and increase the size of our collection,” he explained. With the additional space, the museum can add aircraft, increase educational opportunities and host more travelling exhibits.

The expansion phase of renovation will take up to five years. In the meantime, the story of Curtiss and his mechanical prowess is here for the public’s education and enjoyment.

“He was incredibly mechanically innovative. He could figure out ways to do almost anything,” said ex-museum executive director Trafford Doherty who became executive director of the National Soaring Museum in Elmira in August after 14 years at the Curtiss Museum.

The Southern Tier is rich in aviation history and the two museums make a nice day trip from the Rochester area.
Born in 1878, Curtiss was a former Kodak child laborer whose initial focus was on manufacturing motorcycles. He became the fastest man on earth for reaching a speed of 136 miles per hour in 1907. The museum has a recreation of Curtiss’ motorcycle shop, his bikes and vintage British bikes from the 1960s and ‘70s.

Curtiss and aviation itself emerged in the public eye later in 1908 when he flew his famous June Bug plane a distance of one mile. In 1909, the sale of his Golden Flyer plane to the New York Aeronautical Society was the first-ever airplane sale. From there, his aviation accomplishments grew to include the first long distance flight between two cities — Albany to New York City — in 1910, the development of the seaplane in 1911 and subsequently becoming the father of naval aviation.

Flying itself was a novelty in 1911 but Curtiss took it a step farther, building planes that could land and take off in water. He also built the first planes to land on ships for the Navy. Curtiss trained Navy pilots and was an invaluable resource in the war effort.

His company built the only American-designed, American-built planes used in combat in World War I. At the height of production, Curtiss employed 3,000 workers in Hammondsport and 18,000 in Buffalo.

He died in 1930 at the age of 52 after complications from emergency appendectomy surgery in Buffalo, leaving the world to wonder what else he might have accomplished if he’d had the time. His grave is near the museum at the Pleasant Valley Cemetery in Hammondsport.

“He built three planes here,” Trafford, the former museum director, explained. “Each one better than the last.” Visitors can see reproductions of the June Bug and several other planes, including a plane the father of U.S. naval aviation built for the Navy.

It’s actually a museum of local history, explains longtime museum curator Rick Leisenring, a Civil War buff who gained notoriety for his acting roles in movies such as “Gettysburg” in 1993 and “Glory” in 1989.

The area is rich in Civil War history and a popular historical subject. The museum has a permanent Civil War exhibit. Many residents have family ties to the armies of both sides. Notable examples include Confederate Army Brigadier General Walter Hustad Stevens, an engineer from Penn Yan, and Union Army General William Woods Averill from Bath, who is credited with inventing asphalt paving after the war.

The lives of both men are a subject of the museum’s Civil War collection.

Leisenring’s personal collection of movie props from “Indiana Jones” movies, “The Mummy” and other popular Hollywood action movies is another popular periodic display at the museum. Kids can enjoy hands-on exhibits as well as antique toys and dollhouses.

Patrons of the museum get to see more than finished exhibits; they can see works in progress at the restoration shop. Volunteer craftsmen are working on a reconstruction of the World War II era P-40 fighter plane using new aluminum material for the wings and parts of other aircraft, including two that crashed in a swamp near Ocala, Fla. in 1945.

The museum purchased the fragments in 2011 and brought them to Hammondsport. “It’s amazing to see,” Trafford says of one of the more well-known fighter planes of the era with its trademark tiger shark mouth made even more famous by John Wayne in the 1956 movie “The Flying Tigers” and “Pearl Harbor” in 2001.

Among the many accomplishments of skilled workers in the restoration shop is a 1924 Curtiss-designed speedboat made of mahogany.

Patrons and rating services such as Trip Advisor give the museum high marks. The popular PBS television show, “History Detectives,” has made a few stops at the museum, too. Photography of exhibit items is permissible for personal or educational use.

Johnson said under his leadership, “the museum will tell a broad story using local history to do it.”

More information and an exhibit schedule of events can be found at www.glennhcurtissmuseum.org.