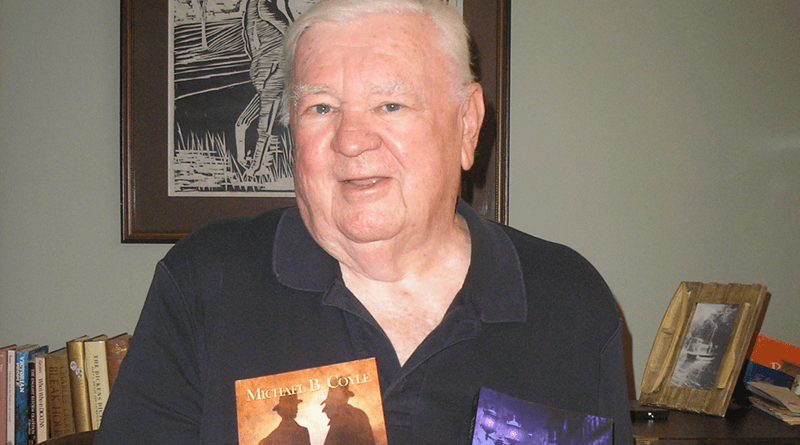 Michael B. Coyle has long been drawn to a life in letters.

He made it. The Canandaigua resident has two published mysteries under his belt, and is pecking away at a third.

All three works draw heavily upon Coyle’s deep love of the works of Charles Dickens, and of English and Irish history. “Tales of the Black Lion,” which came out in 2015, opens at a London inn where Dickens is celebrating his 25th birthday with the likes of Victorian author William Makepeace Thackeray.

When a woman is found slashed to death, detectives Blathers and Duff of the Metropolitan Police are brought in to investigate. Coyle, as he put it, “borrowed” their names from two characters who briefly appeared in “Oliver Twist.”

“These were great characters,” he says. “If you were going to pick out any characters from literature that you could use for fun, those two guys would be it.”

Coyle joked that he’ll return the two characters to Dickens if the celebrated author asks. Dickens died in 1870.

Blathers and Duff’s investigation takes them to a host of interesting Victorian characters as they journey from genteel Victorian homes to the seamier parts of London.

“The last tale of ‘the Black Lion’ takes place in a whorehouse,” Coyle says, with a grin.

“Sons of the Fathers,” Coyle’s second book, also draws heavily upon Irish and English history, and the author’s roots. The book opens in the late 1800s in Drumkeeran, an Irish village in County Lietrim. The author’s father was born there.

“I was born in the US, but I was surrounded by Irish and English immigrants all my life,” he says.

Ireland was then under English rule, though an independence movement was growing. Not all Drumkeeran residents supported the idea of Irish Home Rule, but the differences between the sides were initially political. After a time, they took on a much more sectarian character. Many Irish Catholics wanted to separate from England and form a republic, while Protestants largely opposed independence. The deep, and sometimes violent, conflict is the backdrop for several murders in Drumkeeran and a nearby town, Carrick-on-Shannon, and the suspicious death of a local Protestant Bishop.

Detectives Blathers and Duff look into the crimes, but it is their sons who discover the real killer. Coyle refers to those two young men by their last names through most of his second book.

“Sons of the Fathers” is filled with the kinds of colorful scenes, situations and characters that Coyle featured in his earlier work, though in this case all are found in County Lietrim. Blathers and Duff — the sons of the original detectives — encounter such interesting figures as then-UK Prime Minister Benjamin Disraeli and an Irish gunrunner who leaves a string of bodies in his wake. Blathers also runs into members of the Irish Republican Brotherhood, a secret, fraternal organization dedicated to Irish independence, and is accused of murder.

Though Coyle writes historical fiction, he used “Sons of the Fathers” to illuminate some of the evils afflicting modern society. For example, after an apparent attempt to assassinate Queen Victoria, a cousin of Disraeli tries to drum up fear of “the other,” though in this case, it’s the Irish.

“[That’s] the same fear that’s going on today, fear of something from the outside that’s going to attack us,” Coyle explains.

Rhonda Penders, editor-in-chief of The Wild Rose Press, Inc., says Coyle’s focus on the 1800s might help him fill a niche for readers of historical fiction.

“What you want from any book that you read, you want to pick it up and be transported to another time, another place,” she says. “I think he does that very well.”

The Wild Rose Press, which is located in western Monroe County, has published both of Coyle’s books.

Coyle, a Rochester native, first became involved with writing at East High School, where he was assistant editor of the school newspaper. He went on to write for the student newspaper at what is now the University at Albany, State University of New York.

Much as he enjoyed writing, when the time came to choose a career, Coyle went into the insurance business.

Coyle worked for a number of firms in Rochester, New York City and Buffalo, where he eventually landed at the insurance and risk management firm Aldrich & Cox, Inc. After 25 years with the company, he retired in 2004 as a vice president. The move gave him the time to follow his muse.

Nowadays, Coyle swims many mornings, and heads most afternoons to his upstairs study. The room’s shelves are filled with Dickens’s works, histories, biographies and even books about baseball — he’s a Yankees fan. Coyle tries to read at least 90 minutes a day, and then sits down at his 12-year-old laptop to peck out his latest Blathers and Duff work.

Coyle’s works can be found on Amazon, Alibris.com, and The Wild Rose Press’s website. According to the author, about 300 of his books have been sold so far.

When not up in his den, Coyle enjoys spending time with his second wife, Kathe, visiting friends, attending the occasional play and watching Yankee baseball.

Photo: Michael B. Coyle of Canandaigua is working on his third book. “I wanted to be a writer for years,” the 80-year-old says.