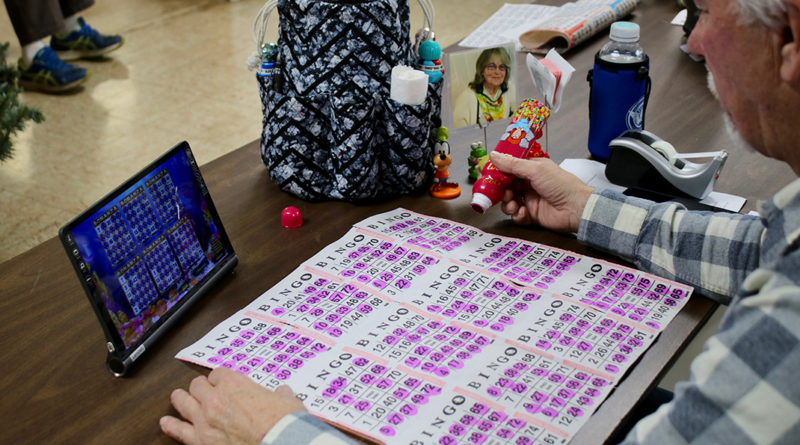 “Oh, there are people sitting in the parking lot at 2:30, just waiting for us to open the doors,” said Brian Liechti. “It’s crazy. We don’t start selling until 5 p.m. Someone is usually here by 4 p.m. to open our doors for those people who have been waiting.”

As the front door opens, people get out of their cars and approach the large meeting room of the Marbletown Fire Department in Newark, where Liechti is the assistant chief and bingo captain.

Bingo won’t start until 7 p.m., but players want to get in, plop down in their favorite lucky spot and get settled. They bring special bingo cases that contain the necessities — the colored daubers that put ink spots on the bingo cards, lucky charms, dolls, family photos and decks of cards or knitting or a book.

“There are definitely players who are organized,” said Dawn Wood, who is in charge of the Port Gibson Fire Company bingo on Friday nights, about five miles from Marbletown.

“They like to sit in the same seat; they even like the same chair. I’ve seen them move a chair around, sit in it, get up, find a different chair and sit in it. They have their lucky charms — some are trolls, some are stones or crystals, some are pictures — they have their lucky ‘thing.’ Sometimes they have them lined up. Sometimes they have them in a pocket,” she said. “They have their ‘luck’ – whatever it is. It’s important to people to have their favorite seat. Many times in the summer I would see a car out in the parking lot at 2:30 in the afternoon waiting to come in so they could be first and get ‘their’ seat. We don’t open our doors until 6 p.m. Bingo for those people who are here that early, they have planned the next eight hours of their day. That’s more than coincidental, more than casual.”

We know there’s such a thing as the Buffalo Bills Mafia. And, after looking at parking lots fill up hours before the games with the letters and numbers begin, there must be a Bingo Brigade, too.

“It’s something exciting to do,” said Jeff Kokinda, 65, of Macedon, sitting next to his wife, Denise, 50, in Port Gibson. “We’ve been doing this for a year now. People ask me now that I’ve retired, what do I do? I tell them I drive my wife to work and play bingo three nights a week. On her birthday, I won a $200 ‘layer cake’ game.”

Denise Kokinda has a bashful, pleasant smile. She met Jeff in a Yahoo! chat room while living in her native Philippines. The online friendship lasted for three years when Jeff flew to meet her and her parents. They’ve been married five years.

Kendra Kurtz, from Bristol, is sitting in the far corner of the Port Gibson bingo room, with her daughter, Stacey Fox.

“I’ve been coming here since 1993-ish,” Kurtz said. “I come here to be around people, to win. My mom usually comes with us, along with my aunt and my second cousin. Everybody here is friendly and it’s an inexpensive night out with a chance to win your money back.”

“We do a lot of donating,” added Fox.

The bingo is fun. The “donating” is vital — and that’s no exaggeration.

Liechti and Wood are fire company and emergency responders in charge of hosting bingo games every week (Marbletown on Thursday nights, Port Gibson on Friday nights) that are, in many ways, the lifeblood of their communities.

“It’s important to support the people who are working this bingo night because this is the fire department,” said Wood, speaking from the fire hall. “We support our town. What if somebody calls for help and we don’t have the right equipment or our equipment is broken and we haven’t replaced it? What if we don’t have enough people to respond? That would break my heart.”

“Oh, we’re going to keep going with bingo — we can’t not,” said Liechti. “There’s no way we can’t do it. All proceeds go to our operating costs and fire equipment.”

“Bingo provides what we need to keep us in emergency service because this is what we buy our stuff with,” explained Wood. “The fuel for our trucks, the insurance we must have — and it’s not cheap. The cost of turnout gear — you can spend $3,000 on that, plus the air pack.”

On a given night, Marbletown will host 60-70 people. Port Gibson can welcome close to 100. On nights when prize money goes up, so does the attendance.

Inside on bingo night, once patrons have their favorite seats, the evening unfolds. Many players are ready to go hours before the first numbers are called. They bring playing cards or something to read or phone photos to share or find friends to talk to.

Karen Barrow of Palmyra has a deal with her husband. He goes out with his friends; she goes to bingo at Port Gibson, normally by herself.

“It’s a nice outing to enjoy by yourself,” she said. “I’ve been going to bingo since I was 5.”

Some of us remember bingo from our youth as a place where the big prize was a turkey or tank of gas. Today, it’s much more.

Port Gibson and Marbletown offer bingo games where the winner gets handed $500 in cash. The more pedestrian games have $25 payouts.

And there are a lot of ways to play. You can buy a sheet that has three cards (“faces”) for $4 and play all night with just that. The more faces you choose, the more of an investment in your night you make.

When the caller starts naming the balls pulled out of the machine, you can mark your cards if you have the number on them with a dauber — a brightly colored, sponge-tipped marker. At Marbletown, you can also choose electronic bingo, where each new ball the caller announces appears automatically on the display screen you rent for the night. You touch your screen and the number is applied to each of the cards you have on it (from 24 to 48 faces) for $24 for the minimum number of faces — 24.

Liechti said Marbletown uses the electronic screens because some of his players have trouble being effective and timely with a dauber (each number called is 10 seconds after the last). Wood said that some of her players prefer the paper cards and her team decided against the electronic devices because they have to pay for them whether they’re used or not.

Both fire companies also use “bell jar” games, which are special extra-cost items played before and during the regular bingo. Some of these are pull-off cards that players buy in stacks because

Alongside the games, both fire halls have a snack bar or concession stand that’s opened well before games featuring very reasonably priced goodies prepared right in front of you. Port Gibson’s ladies’ auxiliary runs its concession stand; Marbletown has no auxiliary, so Brian’s wife, Stephanie Liechti, and her mom do the cooking.

Fire Hall Bingo has been around

Wood explained that Port Gibson’s first bingo nights were held in a big tent in a yard in 1947.

“I remember when I was a child in the 1960s, my dad was in the fire department, he worked the Friday night bingos,” Wood said. She’s 66. “It’s been every Friday night since. We had a couple of ice storms where the county closed the roads and we cancelled bingo. We used the building as a warming shelter during those weeks. We’ve had snowstorms where travel was difficult and they closed the roads. But, those were few and far between. COVID shut us down for a year and a half. You need to know that bingo is our income. We tightened our belts and spent frugally or didn’t spend at all.”

“Out of that we still have to pay a New York state tax, about 5%. After that, what’s left is what we use to purchase our emergency services equipment and supplies,” Wood said.

they’re inexpensive. The bell jar games can have a very high rate of pay in the hundreds of dollars.

She pointed out that her fire department “is an independent company, which means we are not owned or supported by a municipality. The members actually own the fire department. This is a blessing and a curse. The blessing is that if we choose to do something, it’s the members who get to vote on it. The village or town board can’t say yea or nay to it. On the other hand, when we need to purchase a piece of apparatus, it’s not something that is worked into a village or town budget to supply us with an apparatus. We have to save and negotiate and purchase and make the truck payment.”

Marbletown, explained Liechti, is owned and supported by the town of Arcadia. Bingo there clears about $500 each Thursday night, even better when the prizes are higher, so there are plans to increase them. The fire company has been around for 51 years, with bingo nights beginning sometime in the 1980s. They stopped when there was no one to run them.

Now that bingo has restarted, Liechti, 46, is committed to keeping it going, despite the difficulties.

“It’s hard to find somebody. I have so much stuff on my plate I don’t know how I find time to do bingo. But that’s the one thing I make sure I’m up here for. Our volunteer base is just so far gone that, there’s only about six of us that really run bingo anymore, who really work. Sometimes we barely have enough people to run the concession stand. We can literally run bingo with five people without concessions,” Liechti said. “Sometimes we struggle, especially when I’m on vacation.”

Looking around the bingo floor on a Thursday or Friday night, you’d jump to the idea that this is an event for senior citizens.

Say that to one of the players and be prepared for an argument. They see a changing, younger crowd, as well as a certain crowd.

“Most of the people who come here, this isn’t the only place they go to. It’s something they do, their hobby, their way of life,” said Liechti. “There are a couple of people, this is the only place they go — I know that. They’re looking for more socialization and getting out of the house, I would think. This is a service we provide.”

Wood said she knows for certain that some players have been showing up every bingo night there for more than 20 years.

“The average bingo player is pretty easy to get along with,” she said. “We have had some who were super friendly, very nice, very understanding to some who are demanding, hollering that we’re calling too fast. We use a 10-second timer. When they say we’re going too fast, that tells me they’ve got too many boards.”

For all the social noise and milling about in the bingo room before and between games, once the caller starts to direct the night’s activities, things get quiet. Because of that 10-second timer, things move right along and the evening passes quickly, with one intermission to give folks a chance to hit the bathroom or concession stands.

Oddly enough, Wood said she sees few people from the Port Gibson neighborhood in the bingo hall. Liechti ticks off the fire companies in the area that used to host bingo who don’t do it anymore.

Kurtz, who drove all the way from Bristol to play bingo in Port Gibson, said that after everything people went through with COVID-19, bingo reopening was a blessing.

“People were just looking forward for a way to be social,” Kurtz said.