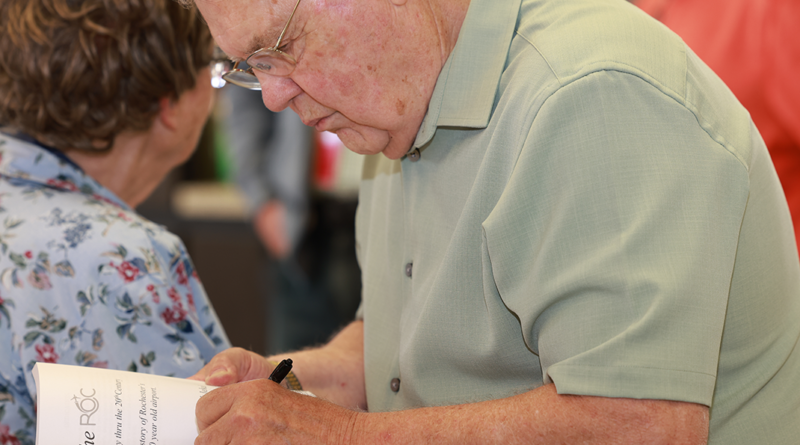 Rick Iekel, a long time Greece resident and former airport administrator, publishes a book about the history of Rochester’s airport

Are you one of the many people fascinated by the aircraft flying over the city? The 100-year-old Rochester airport they land at is pretty fascinating, too.

It’s full of history including Charles Lindbergh landing here in 1927, plane crashes in 1963 and 1978, a Supersonic Concorde landing in 1986 and, more recently, being renamed the Frederick Douglass Greater Rochester International Airport.

Rick Iekel knew the planes flying by overhead meant something special to him growing up on a large farm in Western New York in the mid-20th century.

Eventually, it meant a career in aviation that took him from customer service agent all the way to airport administrator.

His latest book, his fourth, titled “The ROC, Journey Thru the 20th Century, the Story of Rochester’s 100-year-old Airport,” was released in June. The launch party was held, fittingly, at airport facilities on Scottsville Road.

“People don’t realize [the airport] is 100 years old and the hangars on Scottsville Road is where it started,” he said. 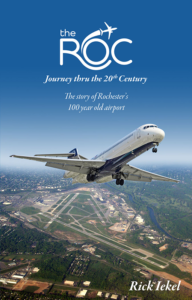 The planes never ceased to impress him as they turned on their engines and lights and headed down the runway. He had the extra thrill of being close-up to the planes and runways inside the confines of a major aviation center.

“There is no more thrilling sight than the nighttime lights that mark the runways and taxiways of a busy airport,” he said.

Even after a 28-year career in aviation, the now retired Greece author and former airport administrator is still fascinated with his former airport workplace. It’s not just because of the planes and events that occurred there, but for the people and politics that helped build and maintain it and helped it adapt to ever changing times.

The one aspect of working at the airport he didn’t like as much as the planes, runways and lights is the politics that often goes along with airport management. It caused him to leave airport management in 1993 when then county administrator Bob King wanted someone from the conservative party to manage the airport.

“It got political and I didn’t want to get politically involved,” he said.

But his fascination with the place never left.

The current Monroe County Executive, Adam Bello, attended the book launch and Iekel is glad that he did. He said the current county administration does a great job of running the airport and its facilities.

He’s glad the airport ended up being named after civil rights leader Frederick Douglass, in 2021. In the ongoing effort to stem racism and oppression there is no better figure to lead the way forward, Iekel said.

Iekel said it can be difficult to write about history and keep it interesting. A friend advised him to make it more of a story and less like a textbook.Travelers can pick up the book in the food court at the Taste of Rochester. Iekel is working with smaller area bookstores and businesses in the area in a mutually beneficial relationship in which they can sell a local book like his and he can help promote their business.

He helped promote the book by building the display case it sits in to draw the eye of customers. The cover he designed helps sell the book, too.

“I’m very excited about the cover,” he said. To do it he took pictures of planes from the airport parking lot. “Then I did an old-fashioned cut and paste with the airplane appearing to take off. I wanted to have the entire airfield in the picture including both the original airport and the latest terminal,” he explained.

A long career in aviation management almost didn’t happen for Iekel, who got locked in the cargo hold of a United Airlines plane early in his career before a flight to Philadelphia. Fortunately for him, a passenger on the plane heard him thumping and alerted the captain before the plane took off.

With a career in aviation and engineering behind him, Iekel, a self-described type A personality, now focuses on writing. He credits his mother and grandmother for their writing and for inspiring him to write. One of his first books, “The Candles of My Life,” is about his mother, Helen, her life and her poetry.

And, if you’re like him and can’t get enough of watching planes take off and land, he recommends watching them from the seating area on the western end of the terminal. You’ll have to pay to park, but won’t have to go through security.

“Unless you’re traveling, people don’t go inside the terminal much,” the former airport administrator said; but you should since it’s worth a trip to the airport even without a ticket.