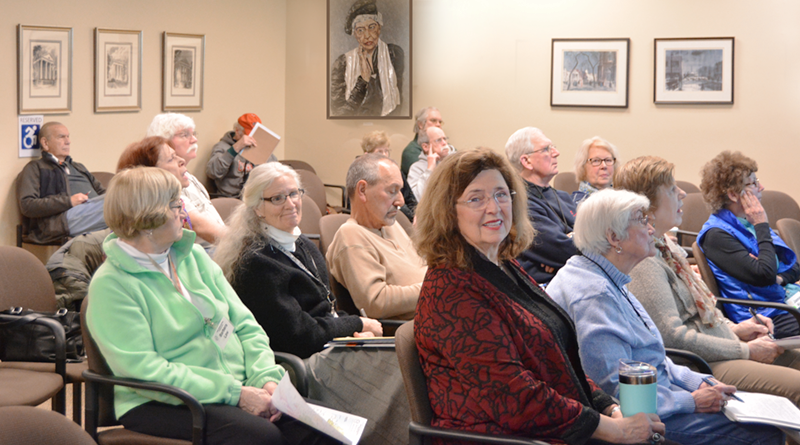 Born in Rochester and raised in Greece and Webster, I graduated from Thomas High, headed off to Hobart and William Smith Colleges in 1965, and never looked back.

But 48 years later I returned — from Florida no less!

This seems to be mixed-up thinking! Aren’t retirees supposed to head south to Florida to escape the cold, snowy winters? Not me! Having retired in 2012 from the U.S. Geological Survey, I sold my home and moved to Rochester in June of 2013.

But what drew me back?

Well, I love the four seasons, for one. But the real draw was many of my family and family friends still live in the area. Wouldn’t it be nice to be closer to them after all these years, to attend family celebrations and holidays together, or just get together for a hike, a kayak excursion or a game night?

But at 66, I wondered how I might meet friends with similar interests that are open to new ideas and enthusiastic about living and learning. In walking my dog in my Pittsford neighborhood that first summer, I stopped to chat with a neighbor. That is how I learned of Osher Lifelong Learning Institute at the Rochester Institute of Technology.

A few of my Florida friends had talked about OLLI in Tallahassee, but I didn’t know much about it. In Googling Osher at RIT, I learned its members lead the courses and the institute has its own facility a few miles south of RIT off East River Road.

The institute was once called The Athenaeum, but in 2006 they applied for and received a grant from the Bernard Osher Foundation and changed the name. In 2009, they moved into the current facility.

The Osher Council, composed of members and adeptly supported by our three incredible RIT staff members, keeps the wheels moving in this organization of over 700 members.

Osher offers three full terms of 10 weeks each and an eight-week summer term. There are about 50-60 courses offered in each full term, and classes are 1 1/2 to two hours long.

I soon found myself taking eight or more courses a term. It was such fun and there are no tests or required homework.

Questions are encouraged and there are great discussions. Even with many interests outside of Osher, I find that staying at home for a few days begins to sap some of my energy. But just walking into the Osher facility, my energy is restored by being among people who are curious, active learners.

Excitement is in the air. If you don’t bring your lunch, a food truck stops by at lunchtime. I have made many wonderful friends at Osher, and lunch is a great opportunity to chat about courses with old and new friends. We have interesting guest speakers such as Mayor Lovely Warren and David Cay Johnson every Thursday at lunch; an arts and lectures series with performers/speakers and refreshments; special interest groups where you can share common interests; excursions to RIT’s new MAGIC facility, the Eastman House, Monroe County Crime Lab, and other locations between terms, and a summer program of seminars and field trips.

These are all wonderful opportunities to learn more about the area we live in and share experiences with Osher friends.

While majoring in math at Hobart and William Smith Colleges, I was inspired by a wonderful geology professor. As a result, I continued my studies at Syracuse University, where I was a real anomaly — I was the first female geology graduate student there in decades.

After graduate school, I moved to Vancouver, British Columbia, Canada, where I worked on environmental issues and was a geologist for the state of West Virginia. I also served as chief of coal exploration at a consulting firm in Harrisburg, Pa., and worked 29 years at the USGS as a research geologist in northern Virginia and scientific publications chief in Tallahassee.

But an interest always near and dear to my heart has been my graduate research at S.U. on stromatolites (cyanobacterial/blue-green algal mats). These mats are the first evidence of life on earth, and fossil stromatolites in Australia are dated at 3.5 billion years old.

My interests in the origin of life tied in nicely with those of member Dick Jones, so we co-led a three-term Osher course on the “Origin and Evolution of Life on Earth,” from the big bang to the sixth extinction — a very complex topic!

I found all the research and teaching so energizing and rewarding. We’ve been encouraged to offer the course again, beginning in mid-February and expanding it to 4 1/2 terms over three years.

I love to travel and experience new adventures, and Monday one-session courses offer an opportunity to share some of my adventures — three weeks in Bali, saving the leatherback sea turtles in Costa Rica, and most recently, keeper of a lighthouse on an island in northern California.

In retrospect, moving from Tallahassee back to Rochester was a great decision. In our course on the brain and aging, we learned that keeping your mind active and challenged, along with having an active social life, are associated with better mental functioning as we age.

This vital, enthusiastic, friendly learning community is definitely a wonderful path to a healthy mind and spirit.