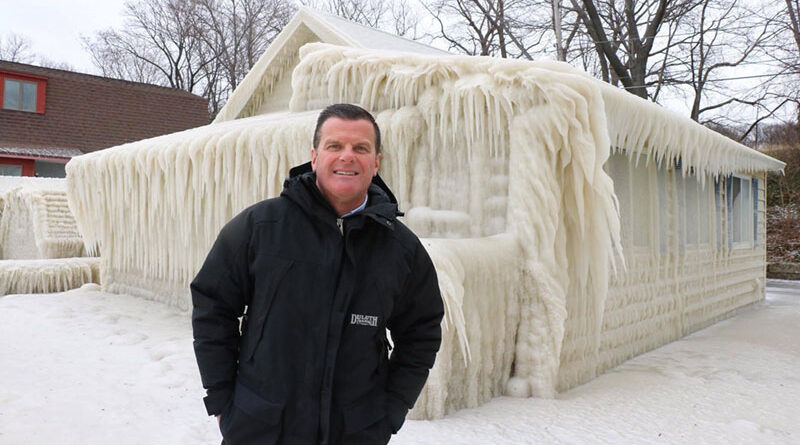 Whether it is a soothing video of a pattering waterfall or a still photo of a rustic barn, chances are, you have seen John Kucko’s work on social media.

The Penfield-based digital artist worked in broadcast media for three decades until he discovered the joy of capturing moments in digital media, now his part-time gig.

He realized as a third grader growing up in Binghamton that he wanted to be a sportscaster for his career. He studied broadcast journalism at SUNY Oswego, which led to an internship as media relations for the New England Patriots. After graduation, he anchored the sports desk for television news in Elmira, Binghamton, and his current employer, WROC TV Channel 8 in Rochester.

“I found a new passion, which is digital,” Kucko said. “The station wanted me to stay, so they let me go part-time and I started anchoring the 4 o’clock segment in July 2016. Going part-time freed me to go with digital.”

He also hosts Kucko’s Camera segment which shares what he calls “enlightening content in an otherwise depressing world of news these days.”

Since the pandemic hit, he posts on his social media a daily video which he calls “Sixty Seconds of Serenity.” It might be waves lapping on the shore of Lake Ontario or a waterfall in the Finger Lakes, but it’s always a video in nature that evokes a sense of calm.

One of his videos featured the Oswego shoreline’s wild waves battering a lighthouse.

“Most people would disagree if that’s serenity,” Kucko said. “But in slow motion, I think there’s serenity.”

This is his second year creating a calendar featuring scenes he has captured in the Finger Lakes. Kucko donates 35% of the proceeds to a worthy cause. This year, he has raised more than $20,000 to donate through the sale of 5,400 calendars sold. He donated the funds toward improvements in Letchworth State Park, whose vistas inspired him to become a digital photographer. Last year, he gave $10,000 to the United Way of Greater Rochester through sales of his calendars. He also sells prints to those who ask.

Despite his successes, he does not consider himself a photographer.

“There are people who are very talented in this and I learned it on my own,” he said.

He has also asked help from experienced photographers but most of his skill he developed on his own.

He calls his enterprise “John Kucko Digital” because he captures both still digital photos and digital video to post digitally. He also hosts Facebook Live videos.

“It’s a full realm of digital; photographers are pure photographers who went to school for this,” Kucko said. “They’re great. I do take pictures, but I probably do more videos. I do storytelling, like history and nostalgia and documenting stuff.”

Along with the photos, he posts captions describing what is happening or interesting history about the area.

“Photography is a small part of it,” Kucko said. “Moving picture and sound is what I was bright up with. I like doing neat, cool compelling videos.”

He described his method for finding subjects as “going out and following my instincts.”

He also receives tips from his social media followers as to good places to shoot, such as historic places.

“I rely on my followers quite a bit,” Kucko said. “A lot of it is things I see in my travels. When I’m driving, I pay attention all around, peripherally. If A building intrigues me, I take photos after getting permission. I enjoy it.”

Kucko loves Americana and is a self-described country boy. He likes documenting barns with both images and a write-up on who owned them, how they used them and how they are important for rural history. For the past three years, he posts a Friday Farm Feature. Octagonal barns are a particular favorite, along with carriage houses, which are often used for more modern purposes these days such as a garage or home.

Kucko hopes to make a coffee table book of his photos. Many of his followers have suggested the project. He also wants to travel more once the pandemic permits; however, for now, he’s content to see what New York offers.

“We have plenty of treasures around us,” Kucko said.

Kucko’s wife, Charla, works in public relations and marketing at McDougal Communications in Rochester. The couple married in 1990 and have two daughters who appear to be following in their parent’s footsteps. Caroline is a sophomore studying marketing at Duquesne University in Pittsburgh, Pennsylvania, and Natalie is a news reporter for 13WHAM News.

On election day, Kucko and Natalie covered a news story at the same site for competing news outlets at Susan B. Anthony’s gravesite.

“At one point we were on the air at the same time 15 feet apart,” Kucko said.

Though “competitors,” he sounded proud of the unusual moment.

Outdoor winter photography offers its own challenges and opportunities. Photographer John Kucko of Penfield likes winter best of all the seasons for the dramatic images wintertime provides for his art photography.

“I’ve had some of my biggest viral hits in the winter,” he said of the photos he posts to social media. “I love shooting ice and showcasing ice. Winter is when we see the most beauty. I love seeing waterfalls in their frozen state.”He also shoots the frozen shoreline along Lake Ontario.

In addition to the dramatic scenery, Kucko enjoys shooting in winter because it’s peaceful and more solitary as he’s outdoors seeking shots.

“In winter, people generally don’t like to brave the cold and elements,” Kucko said.

The glare of sun on snow or lowering clouds full of snow bring plenty of contrast to wintertime photography. A self-taught photographer, Kucko advises trial-and-error for finding the best angles and lighting during the winter months.