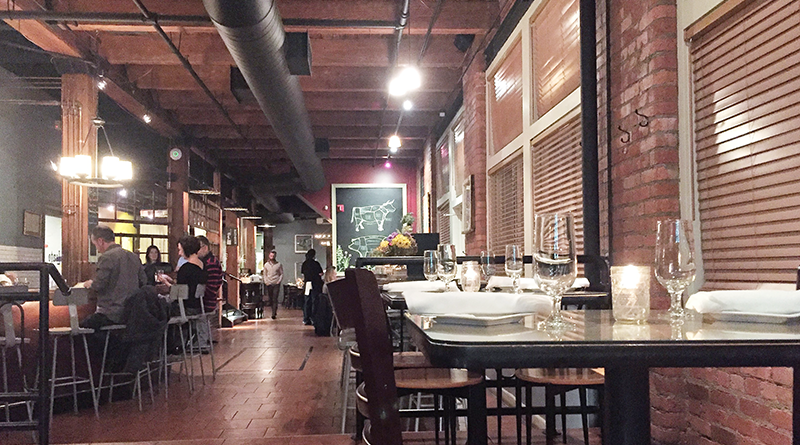 Dinner at Lento is proof that even as flurries fall from the sky on a cold November evening, locally-sourced food can be found in Upstate New York — and it’s delicious.

The restaurant in Rochester’s Village Gate Square, opened in 2007, has been farm-to-table before farm-to-table was a thing in Rochester, or much of Upstate New York, for that matter. The ingredients are sourced from farms in the greater Rochester area and all the breads, desserts, charcuterie, pickles and just about everything else is made in-house.

Those efforts were rewarded in 2015, when chef and owner Art Rogers was named a James Beard Award semifinalist as best chef in the Northeast. The James Beard Awards are considered one of the most prestigious in the culinary industry.

Lento means “slow” in Portuguese, Spanish and Italian, likely a nod to the slow food movement that promotes locally-sourced and environmentally-conscious food.

The name did not carry over to the service, as we were quickly seated, and our waitress was attentive and helpful as we mulled over the seafood bar and starter menus. Lento offers $1 oysters on Tuesdays, which rightfully draws big crowds — so much so that Lento encourages diners to make reservations for oyster night.

Our platter of six oysters ($2.50 to $3 each), sourced from Massachusetts and British Columbia, was accompanied by lemon and mignonette, a shallot and vinegar sauce that’s a classic pairing with raw oysters.

We also sampled one of the restaurant’s newest creations, house-made ices. Think of it as a savory granita for seafood. We opted for the beet, dill and horseradish, though bloody mary, cucumber, ginger and jalapeno, and spicy melon and mint varieties were also available.

The ice burst with vivid red colors that swirled into the oyster’s natural liquor and gave the oyster a distinct earthiness that complemented the salty, briny shellfish. The best of land and sea, if you will.

The Jonah crab claws ($4 each) were filled with sweet meat, but the meat was very flaky and hard to get to, even with the provided nutcracker. Our waitress, likely having seen me tearing apart the claw with my hands to get the last delicious morsels, quickly slipped each of us a moist towelette.

We paired the seafood with duck liver mousse ($9), served with pickled red onions and sliced baguette. Duck liver is one of my favorites because it’s rich and fatty but has a more delicate flavor than other types of liver. When paired together, the potent pickled onions cut right through the fattiness of the liver. A sprinkle of coarse Maldon sea salt was a great complement for the smooth mousse.

Lento offers both full-sized entrees and medium-sized plates — a genius move that more restaurants should adopt. Yearning for a last taste of fall before winter is upon us, we chose the house-made butternut squash ravioli ($21) from the medium plates menu.

The portion of five or so large ravioli was served with sage brown butter, shredded Pecorino Romano cheese, sautéed spinach and shitake mushrooms from Rochester’s Smugtown Mushrooms and for a bit of crunch, pumpkin seeds and crumbled amaretti cookies.

The pasta was toothsome and sturdy with just a little bite, a sign of good pasta cooked well. Toasty, nutty brown butter is one of my all-time favorite foods and the addition of sage and a touch of cinnamon only takes it to the next level. The crumbled cookies were a surprise star, adding not only texture, but just a bit of sweetness.

This dish was autumn food at its finest.

It’s my own personal rule that I must order monkfish whenever it’s on a restaurant’s menu. When they’re alive, monkfish are ugly as sin, but when presented as a perfectly-cooked filet with gulf baby shrimp, a sweet-and-sour agrodolce sauce and smooth, rich polenta made from local corn ($30), it’s a thing of beauty.

The toasted pine nuts drew out the subtle nuttiness of the purple cauliflower, while the capers added the bite of acidity that just about all seafood needs. As for the monkfish itself, there’s a reason it’s known as “poor man’s lobster.” The fish is firm and slices, rather than flakes, like a mild whitefish would, and is sturdy enough to stand up to the bold vinegary agrodolce sauce.

For dessert, we split a slice of pumpkin cheesecake ($9), with a scoop of house-made (what else is new?) espresso ice cream on the side ($2). The cheesecake was good, but a heavy hand of spice, particularly ginger, unfortunately covered up the pumpkin flavor and the flavor from the chocolate ganache layer that topped the cake.

Along with the food menus that change daily, Lento also boasts a lengthy wine list with many Finger Lakes offerings, as well as a New York-centric beer list and creative cocktails, nearly all of which incorporate at least one New York-made component.

Make no mistake: Lento is fine dining. But one of its greatest successes is in shedding the unfairly-applied stigma that fine dining is too expensive and too unapproachable. The restaurant itself is industrial, but chic, with brick walls, an open ceiling with exposed wood beams and air ducts and chalkboard diagrams of a cow and pig broken down by cuts.

It’s cozy, but refined. A couple could be celebrating an anniversary at one table, while someone else could sit at the long, tiled bar and enjoy dollar oysters and a few $3 cans of Genny Cream, and everyone would feel right at home.