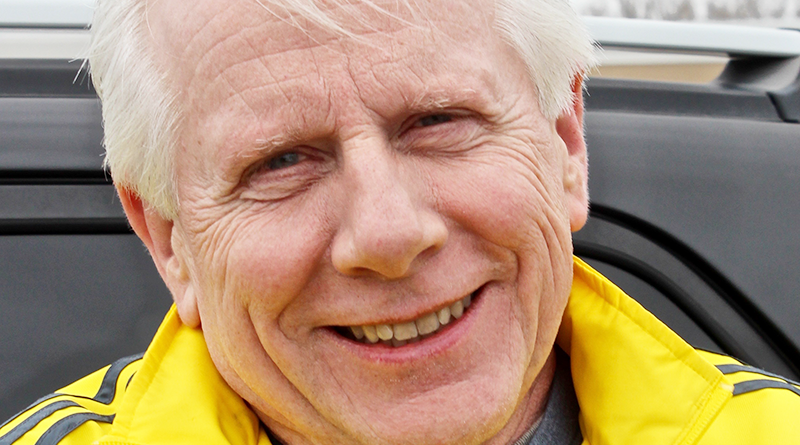 Enjoying a lunch in a nursing home dining room, one of the veterans at the table asked why Bob was always looking back over his shoulder.

“To see what’s catching up on me,” Bob said.

In the race of life, something is always running behind you. When you’re young, chances are those things are so far in the rear, you can’t see them.

But when you get to a certain age, those things start to gain ground.

For men, the prostate gland that has helped provide so much intimate fun and reproductive success for years and years is almost assuredly going to provide some grief sooner or later.

When the trouble is cancer, says Patrick Fisher, 67, of Penfield, get ready to fire up your lifelong learner skills, because you have a lot of information to gather and a lot of decisions to make — and his nonprofit organization, Us TOO, can help.

Fisher is a former 25-year Kodak business systems analyst who retired, then went to Arizona to work at Boeing for five years, and finally came back to the area to work at the University of Rochester Medical Center in their vaccine trials unit, recruiting people for clinical trials.

The reasons he came back here from Arizona? He had family in the area, but also, “I missed the green,” he said.

In 2010, his doctor noted that Fisher’s PSA (prostate-specific antigen) level was going up. Something was active in the gland that provides seminal fluid. He had a biopsy and was told there were cancer cells present in the sample.

Fisher was stunned. “I had no symptoms,” he said.

Cancer had paid too many visits to his family, killing his father and four brothers; two of his sisters had breast cancer. “I had a typical reaction to the biopsy results,” he said. “I’m not comfortable knowing I have cancer and not taking action.”

He decided to undergo robotic (DaVinci) surgery, a prostatectomy, which removed much of the gland. “I had absolutely no regrets,” he said.

But he did feel “cheated” because no one had explained the options — and there are many — for treatment, and the various outcomes that can be expected. He’s worked in the medical industry, and he understands why: “No provider [doctor] has time to sit down and walk you through all the options and all the outcomes and risks you face,” he said.

After surgery, Fisher was incontinent, and keeping a job while in that state was quickly out of the question. He went on disability, then retired.

He realized he was fighting this thing alone.

“When I got my diagnosis, I had a bad attitude about support groups,” he said. “I thought they were groups of grumpy old men sitting around and complaining about their outcomes. I didn’t need that negativity. So I did my own research.” He found that urinary incontinence was common, and many men have erectile dysfunction after prostate surgery. “But there are therapies,” Fisher said.

His doctor told him that he could get himself back in normal form only through a dedicated effort, and that’s what Fisher did — he retired to concentrate on the therapies that would give him normal bladder control. And he stresses that it took not one whit less than a dedicated effort.

“While I was going through all this aggravation — and it was two years, I wondered if there were support groups that would help men like me.” He found that the American Cancer Society had stopped hosting such groups, and the Gilda’s Club, which did meet, didn’t have an educational component, and no doctors attended.

He found out about Us TOO, a national organization, and saw that the group had chapters as close as Batavia, Syracuse and Utica — but nothing in Rochester. “I made a call to headquarters and asked why there was no chapter in Rochester, and they told me they were trying to develop one and needed an interested patient to get them started.” Fisher raised his hand to get Us TOO off the ground.

Fisher worked hard to get the first meeting together, running ads in pennysavers, and crossing his fingers that 10-15 men might show up — 35 did. “I found out that this was something the community would support,” he said.

What Us TOO provides for each meeting is an educational component, with an expert — an oncologist or urologist or physical therapist — on hand to explain things and answer questions.

“Our meetings are facilitated by a subject-matter expert,” he said. And in those meetings, people get answers.

In between meetings, Fisher, who retired again but now spends most of his time organizing, goes to doctors’ offices and drops off flyers and announcement for the next meetings, which are held at Legacy Living Centers throughout the area. His mailing list now has 350 people on it. He also spends a lot of time on the phone answering questions and referring people, and telling the story of Us TOO to men who need to hear it.

And every meeting is valuable. “Every day there’s something new,” he said. For example, HIFU (high-intensity focal ultrasound) treatment has just been approved in the United States (it’s been used in Canada and Europe for years). There is hope that the newest immunotherapy treatments used for other kinds of cancers will be able soon to marshal the body’s own defense system to kill the cancer.

Fisher said many groups of men are at risk for prostate cancer — white men over 50, African-American men over 40, veterans who were exposed to Agent Orange in their service, transgender women who have prostate glands, and men who take testosterone supplements without their doctor’s guidance. “Testosterone feeds prostate cancer,” Fisher said.

Getting screened is important for those groups, but even if cancer is detected, only 25 percent of the time is it an aggressive disease. Fisher said “active surveillance” is used to determine if the cancer is progressing. “Maybe it won’t,” he said.

If a man and his family decide on active treatment, the list of options is getting longer — radiation, surgery, proton beam radiation, Cyberknife, cryotherapy, 3T-multiparametric MRI. Many of these approaches are available locally.

Fisher learned the hard way about the mistake not to get more information before he started on his journey with prostate cancer. He offers the same advice he now follows: “Don’t be afraid. Don’t be timid. Talk it up with your peers. I bet if you pick six of your male friends, you’ll find one of them is dealing with prostate cancer.”

If you’re taking Fisher’s advice and are ready to speak up to get more information, called Us TOO at 585-787-4011, check out Facebook: USTOORochester, or email: UsTooRochesterNY@gmail.com, or the website: www.sites.google.com/site/ustoorochesterny.

Us TOO Rochester chapter, started by Patrick Fisher, 67, of Penfield, stands ready to help those who are diagnosed or concerned about prostate cancer. Peer support meetings are scheduled for the second Thursday of the month in May, July, September, October and November. Patient education seminars, facilitated by medical professionals, are scheduled for June and December.

On June 17, “A Community Conversation: Prostate Cancer and YOU!” is scheduled at the Locust Hill Country Club, where men and their families can learn about imaging, screening and treating prostate cancer. Advance registrations are being taken at 585-787-4011. More information, email UsTooRochesterNY@gmail.com.