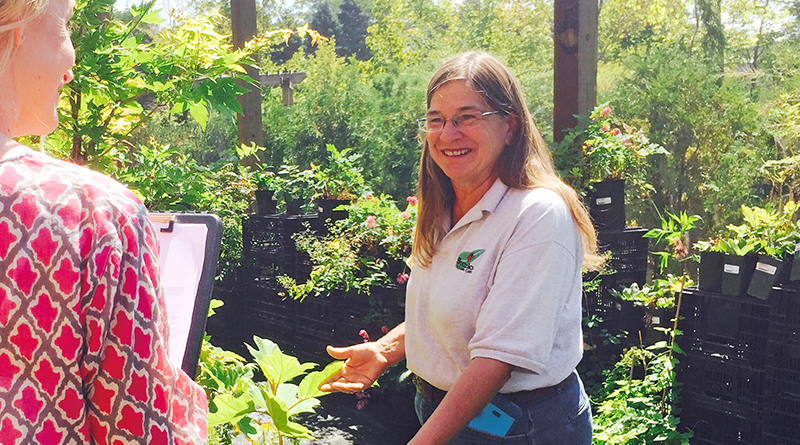 Laurie and Albert Broccolo combine talents to run business together

In the late ‘50s and early ‘60s, young girls were still largely expected to get married and have kids or become a teacher, nurse or secretary.

Picture a girl wiggling in her seat and looking dreamingly out of her classroom window, longing to be outside, not inside. What was her destiny? Should she try to “fit in” or could she create her own path? Laurie Renée Ver’Schneider, now Broccolo, decided to create her own destiny.

The thought of sitting at a desk all day appalled her so she enrolled in Finger Lakes Community College for environmental studies and horticulture, and was one of only two females in the program. “I loved the program because many of the classes were ‘hands on’ and held at places like Sonnenberg Gardens, or a local cemetery. We also did a lot of hiking,” she said.

With dirt under her nails and hiking boots on her feet, she knew this was where she belonged.

Ted Collins recruited Ver’Schneider and one African-American student from the college to join his team as soon as they graduated in 1978. “Ted said he believed in giving everyone an opportunity and wanted to stay ahead of the competition in hiring minorities. Was the world ready to embrace a woman entering a traditionally male-dominated field? Yes and no,” she said.

On the positive side, Ver’Schneider recalls some of the women’s reactions when she went to work on their properties. “Most were surprised and many cheered me on. Conversely, another woman told me that it was unacceptable for a woman to be doing man’s work. She did not allow it. However, in most cases being female was an advantage because clients were more likely to be impressed and call the office or write notes about how I often outworked some of the men,” she said.

Collins proved to be an effective mentor about the landscaping business including advice on how to work with male crews. He gave Ver’Schneider the opportunity to start a lawn care department. From there, she grew into roles in marketing, sales, hiring and training staff and budgeting. She became vice president of all tree and lawn care services that were by then half of the landscaping business that Collins founded.

Match made in landscaping

While Ver’Schneider was pursing her landscaping career, Albert Broccollo was working at Taylor Instrument. “Laurie was a down-to-earth woman and not interested in material things. She loved nature and introduced me to hiking through muck and exploring bogs,” he said. They married and their journey began.

In the mid-’80s, people became aware of, and concerned about, the extensive use of pesticides. Since Broccolo had an environmental science background, she developed programs of just spot treating weeds, crab grass and grubs using minimal pesticides. “The lawn care industry became very controversial and my colleagues and I founded the New York State Lawn Care Association to educate members and the community about the products we used,” she said.

“The men who owned their own business or managed larger corporate companies voted that I would be the first president and spokesperson because I was a woman. A female businessperson balanced the media’s too-frequent portrayal of hysterical women. In the same vein, it shifted the image of men as caring only about money to men caring about the community,” she noted.

Broccolo rose to the challenge of being in the spotlight armed with facts.

One of the times her profession clashed with the marriage was the creation of a lovely ring with an expensive opal crafted by Albert for Laurie. “She dug in the dirt, lugged trees and plants and dragged pallets all over the place. The stone became gouged (Laurie says ‘nicked’). I replaced the stone with a moon stone of lesser value but it was hard to see how my work of art became a victim of her labor,” remembers Albert.

When Collins sold his business, Laurie and Albert already had one child and she was on maternity leave with her second child. “I was unhappy, so my husband suggested I start my own business. I was concerned that we would lose my steady income that contributed to our home and he asked, ‘What is the worst that could happen? We sell the house and move into an apartment.’ He took all the stress out of my decision and while on maternity leave in November of 1990, Broccolo Tree and Lawn Care was born.”

Albert recalls, “Not surprisingly, her first employee was another woman. She has been determined to grow the business with equal opportunities for men, women and minorities.

Lois Dannenberg has been an employee of Broccolo Tree and Lawn Care for 24 years.

“Laurie has been involved in many women’s business associations. She is a sought-after speaker on environmental issues and is definitely a role model for women in non-traditional careers,” Dannenberg said.

Another female employee — Jessica Demasio — echoes Broccolo’s support of women in the field. “I have worked for Laurie and Al for 13 years, starting off as a lawn technician and working in many other facets of the company. I have found my niche as director of sales,” Demasio said. “They have always given me the freedom to try out new things and give constant support of my position. Laurie has been a solid role model for me. I have truly admired her being a female leader in the green industry.”

Both Broccolos agree that many people assumed the business belonged to Albert because he was a man. “I accompanied Laurie to arborist and landscape conventions. I did not work for her. Laurie would look at equipment or fertilizer products and ask questions, yet the sales rep would ignore her and talk to me,” recalls Albert.

“See my tag. It says spouse. I am not a landscaper, so please answer my wife’s questions directly to her,” he would say.

Laurie says it was infuriating and Albert did a great job of shocking them to reality.

The business grew quickly and after three years, Albert joined the company. He advised Laurie about the mechanical and technical needs of computers and efficient equipment. Albert laughs as he says, “The reason it worked is because I don’t tell her about plants and she doesn’t try to tell me about wiring. We each have our own areas of expertise and we respect those boundaries.”

Both Broccolos have a passion for preserving the environment and repurposing things. Albert uses his talent in welding and his artistic eye to create unique works for gardens. “One of the projects I really enjoyed was creating the wedding arch,” says Albert. The idea of creating an arch started a year ago as part of a landscape design request for Glendoveers, a venue for weddings. The idea was that the gorgeous natural surroundings could be enhanced for outdoor weddings and other events.

The entrance to it is a natural arch with trees and Albert was inspired to create a metal arch to draw one in and define the space. “No hurry,” said the owner. “Do you know what that means to an artist? No deadline?” asked Laurie.

A few months ago, a friend of their son asked if it was possible to make an arch for his wedding in September of 2016. That was the deadline needed for Albert to focus on getting the design from his head to actual creation.

He finished it one week before the wedding and now it’s going to its permanent home for future weddings.

Albert also designs green roofs, which are roofs covered with vegetation that absorb and slow down storm water, help insulate from heat and cold and improve air quality. Laurie, Albert and the team also design rain gardens that help to divert runoff from parking lots. The rain washes off the roof and filters through plants and becomes bio-sealed rather than seeping into a basement.

Another common philosophy of this couple is giving back to the community. Laurie is active in the Genesee Land Trust, Greentopia and Albert is active in the Rotary Club and storm water management for the town of Penfield.

The Broccolos have been married for 38 years and worked together for 23 years. They would be quick to point out that not every couple can work together. They are designing a new home to be built on the property of the landscape company in Penfield. Laurie comments, “They say couples can only rarely work effectively together to build anything. We’ve come this far, so I think we can handle one last house.”