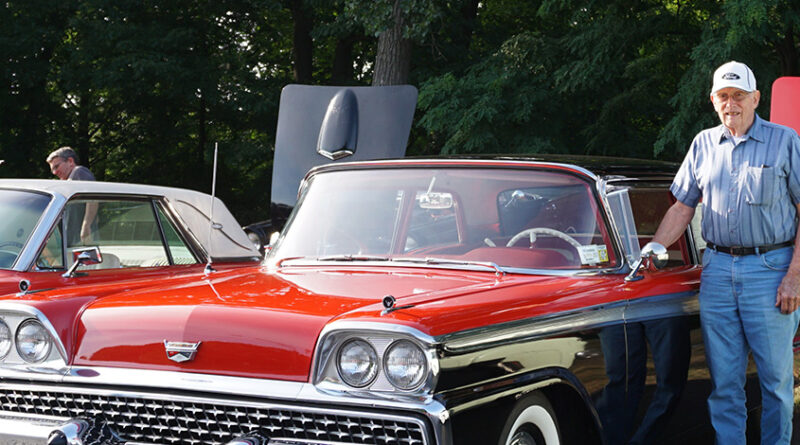 Jim Caffrey first caught sight of a 1951 Studebaker Champion Deluxe when he was just a child.

“I fell in love with this car when I was 5 years old,” the 72-year-old Webster resident said.

Decades later, Caffrey came to own that model of Studebaker. On July 15, he and at least 400 other classic car owners displayed their prized machines at Damascus Shrine Cruise Night.

The weekly event is held each Friday at the Damascus Shrine Center in Webster through Sept. 9, weather permitting. Profits from the events go to the Shriners Hospitals for Children.

The same night that Caffrey drove his black beauty to the Damascus Shrine Center, Fred Witt appeared with his lovingly preserved 1959 Ford Fairlane 500 Galaxie. It, too, came with memories. 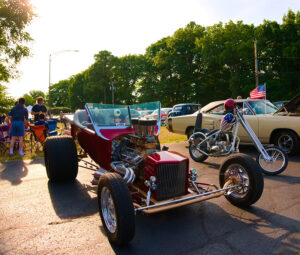 “When I came back from overseas, I bought one like this brand-new,” the 87-year-old retired Xerox engineer said. “I met my wife, we dated. We went on our honeymoon in it, and like a fool I sold it after we were married a couple years.”

Witt spent the next 50 years looking for another Ford of that model and year. About eight years ago, he found one in a national classic car catalogue that was for sale in South Carolina. Witt only had to view pictures of the car and talk to the owner to make up his mind.

“I bought it the next day,” the Webster resident said.

Witt has done a lot of work on the car’s engine and transmission, but the rest of the Ford is much as it was when it came off the assembly line. Painted black with red trim, it was an eye-catching sight at Cruise Night.

“When you see something like this, what can you do but fall in love with it?” he said.

Witt’s Galaxie 500 beat nearly 130 other entries in the 2017 BayTowne Car Show to take Best of Show. The annual event is held in Webster.

In addition to showing his Ford, Witt enjoys tooling around town in it with his wife, Janet. The pair will celebrate their 60th wedding anniversary in October.

“I’ve worked as a mechanic all my life,” the 66-year-old Webster resident said. “I do [auto part] fabrication now, and [parts] restorations.”

He can also make a car from scratch. One of Bertch’s creations, a hotrod version of a Ford Model T, seemed to crouch on four wheels at the Damascus Shrine Center, ready to pounce. He fabricated almost every part of the car, including its frame, grill, swooping exhaust pipes, windshield, steering wheel and upholstery.

“The engine block and the basic body I did not make,” he said. “It’s a fiberglass body I purchased from California.

Caffrey was introduced to his special kind of car as a child living in Charlotte. When his family’s 1955 Pontiac station wagon wouldn’t start in cold weather, the Methodist minister living next door used his 1951 Studebaker Champion Deluxe to jump-start the car. Caffrey was fascinated by the Studebaker’s bullet-nosed front end.

“It was designed…to look like a rocket ship,” Caffrey said. “They only did this design for two years because Studebaker was afraid they went too over-the-top weird.”

Caffrey grew up, and acquired a job doing repairs and restorations for the Ethan Allen furniture chain. He retired from that job after 30 years, but never forgot the unique car that his family’s neighbor drove.

“I told myself I would get my bullet-nosed Studebaker when I was 50 years old,” he said.

In 2000, just two months from his 51st birthday, Caffrey bought the kind of car he fondly remembered.

Caffrey helped rebuild the Studebaker’s engine and had most of its chrome-plated parts replated, leaving the car in excellent condition. Even the little radiators that are used to warm the seats in winter work.

“It takes hot water from the cooling system, runs it underneath the floor to these radiators,” he said. “It works great.”

When not enjoying his Studebaker, Caffrey likes to spend time behind the wheel of his other vintage car, a 1958 Nash Metropolitan.

“I always have a major smile on my face when piloting one of these rolling, rare, vintage wheeled sculptures!” he said.  “What could be better that that!”