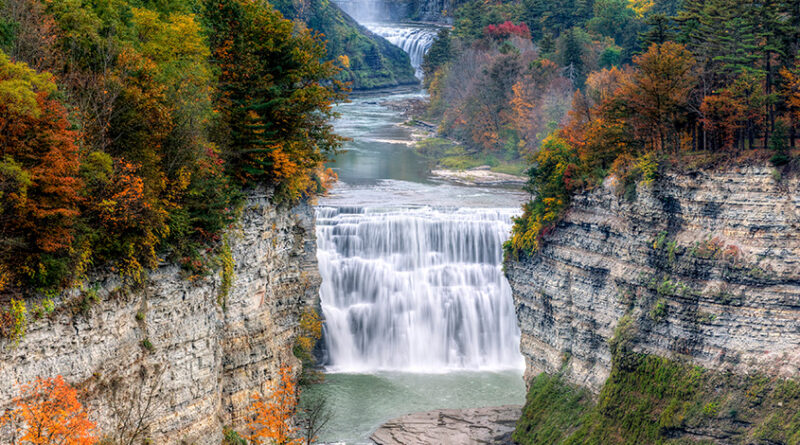 As the temperature dips overnight and the sunlight mellows, plan to take a leaf peeping trip. But don’t plan concretely.

“I get more messages from people on my page in September and October as to when I should go to the Finger Lakes for foliage,” said local nature photographer and WROC Rochester personality John Kucko. “It’s tough to say. Leaf peeping calendars are pretty accurate, but sometimes they say it’s almost peak and it’s not.”

He has observed trees transform in 24 hours from barely tinted to peak. Or windy and rainy weather can obliterate a colorful tree’s leaves in mere hours. While just a seasonal disappointment to most, as a nature photographer, Kucko wants to leverage every opportunity he can to capture peak fall color.

“My big concern is fall is fleeting,” Kucko said. “Fall is special. With the great trees and landscape in this area, it’s a prime region. At Letchworth one time, 24 hours later, it was completely different. Dull fall colors to majestic fall color in a day. That’s how quickly it emerges and just as fast it’s gone.”

He said that in addition to weather fluctuations, microclimates, such at Watkins Glen, can make timing a leaf peeping trip tricky.

“I can remember two years ago, by Canaseraga, they had spectacular color in the hills and five miles away, there was not much at all,” Kucko offered as another example. “You can see that with the emergence of fall color or lack thereof.”

In Rochester, he likes to photograph Mount Hope Cemetery.

“It is one of the fines places for foliage in America, I’ll argue,” Kucko said. “There are so many trees that have been around for generations. They tend to pop around the end of October and even November if it’s been a calm fall. It’s fall’s last surge and it’s spectacular. They have so many glorious trees of various kinds.”

He also likes Maplewood Park, as its trees along the Genesee River boast many reds and yellows each fall.

“The further south you go from the Thruway, you’re gaining elevation,” Kucko said “The color turns earlier in the Southern Corridor.”

Regionally, Kucko likes Hammondsport, Keuka Lake and the Ithaca area, which tends to peak in late September to early October.

“Two years ago in Newfield, just six miles outside of Ithaca, the color was stunning,” he said. “They have the oldest covered bridge still in use in New York. I saw color I’d never seen before.”

The aforementioned Watkins Glen in Watkins Glen offers fall color in late October, as does Letchworth State Park in Castile. Letchworth is regarded as the “Grand Canyon of the East” and boasts a large variety of tress to provide a palette of fall colors.

“I really like Trumansburg and Taughannock Falls State Park,” Kucko said. “Hemlock Lake is very good with color, as is Canadice Lake. There’s also Stonybrook by Dansville, and the Springwater area near Canadice Lake. You have rolling hills, some elevation. You may have a 48-hour window where the color is fantastic and it’s gone.”

Not all regions linger until October before showing their true colors.

As for planning a leaf peeping trip, whether hiking trails, biking paths, lake cruising, hot air ballooning, riding a train or bus or driving, “the key is flexibility,” Kucko warned.