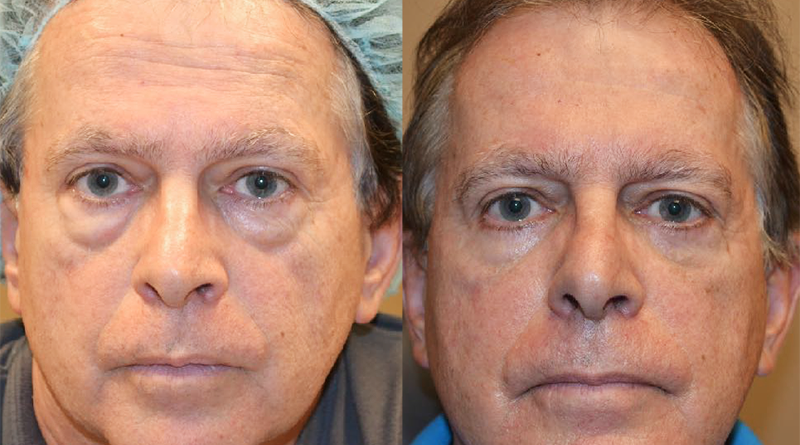 Journalist goes for a $3,000 eye-job. He shares his experience

Once upon a time when I was young or even into middle age, I looked upon people who had plastic surgery with some disdain. After all, I thought, age should be worn like a badge of honor — and who has the time or the money to spend on something that’s largely unnecessary, isn’t approved by your personal physician and the health insurance won’t pay?

But as time moved inexorably on and age-related physical changes started showing up, one of them really started to bother me.

For years I thought the bags under my eyes were there because I was tired. In fact, I was tired most of the time. Having kids, commitments and working a couple jobs will do that to you.

Unfortunately, however, it became apparent that the under-eye bags were there to stay no matter how much rest I got. A comedian (whose name I’ve forgotten), joked that his eye bags were so big, the airlines started charging him for the extra baggage.

Facial creams claimed to reduce or even eliminate the eye bags but if the cause of the eye bags is age-related sagging redistributed fat pockets, no cream in the world is going to eliminate them no matter how much it costs.

Genetics may have something to do with it, too. My parents had them and my brother had under-eye bag plastic surgery called blepharoplasty in his late 30s which made me want to have it done even more as time went on.

Under-eye blepharoplasty is considered cosmetic since it does not affect a patient’s vision. But it can affect his psyche and the more I looked into it, the more enticing it became.

Potential patients should do their own homework but what they’ll find is blepharoplasty is a procedure the vast majority of patients are very satisfied with. As my doctor, Katherine Whipple, says, it’s one of the most common cosmetic surgeries in the United States today. She practices at Envision Eye & Aesthetics on Monroe Avenue in Pittsford.

I could have started on some other body part such as thinning hair for example but the cost and satisfaction rate aren’t nearly the same for hair plugs or whatever they do to a man’s thinning pate these days plus I heard a sports talk show host implore his listeners not to have hair from heaven knows where stapled to your head.

But few say blepharoplasty isn’t worth it, if you can afford it.

“The eyes are one of the first parts of the body to age because the skin is so thin,” Whipple says. “Often, simply correcting the eyelids can make a person look years younger.”

Whipple is one of only two board-certified oculoplastic specialists in Rochester. Still in her 30s, Whipple grew up in Webster, went to SUNY Geneseo, did her residency at the University of California at San Diego followed by a fellowship in San Diego before returning to Rochester and opening her Pittsford practice in 2015.

Even though doctors with her credentials are rare, picking someone you’re comfortable with and have confidence in is essential since they’ll be taking a sharp instrument to a very delicate area.

She says her work is a combination of technology and artistry that allow her to work on the most visible part of the body, the eyes and face.

“In Rochester, my experience is that people fear being judged for caring enough about their appearance to do something about it,” she says. That should not be the case, she adds. “In San Diego, everyone is doing it and they are proud of it. Where we as a society get into trouble is when we over value that attribute, because it’s just one portion of what makes up an individual.”

A lot of people in Rochester are having cosmetic surgery, too, Whipple says, as she mentions that Rochester is in the top 10 in the country per capita for cosmetic procedures. Unlike Californians, we’re just not flaunting it.

The cost of blepharoplasty and cosmetic surgical and non-surgical procedures varies widely by city, region, practice and procedures. It also depends on the surgical time involved and the medication and equipment used. Blepharoplasty is in the top five cosmetic surgeries nationwide along with breast augmentation, liposuction, rhinoplasty and a tummy tuck.

A financially-challenged paralegal and journalist found there is a way to reduce the cost of blepharoplasty if you can stand it and your doctor offers it, which is to forego general anesthesia (I opted for local anesthesia) and the cost of a private recovery room.

I’m not exactly courageous but since it meant saving $2,500 or more, I had it done at her office. The cost of my procedure came to a little over $3,000. I didn’t think twice about it.

Recovery time varies by individual. The procedure took about an hour and bruised my left eye way more than the right. No matter how fast one heals, you’ll look like you lost a boxing match by a wide margin the first week or so and it will take a few weeks or more for all the bruising to go away.

If you’re going to spend thousands on the procedure, you should follow the rules of recovery to maximize the benefit. Just like the boxer with the swollen face, it’s going to take a lot of soft ice packs for the swelling to go down.

For the not-retired, you’ll most likely be going back to work with bruising your co-workers might notice. Men have a reputation for not noticing what other men look like but my barber was one of the first to notice. He stood back, took a second look and asked what the hell happened.

But, hey, if they can be proud of it in San Diego then we can, too, as long as you don’t get carried away with it.