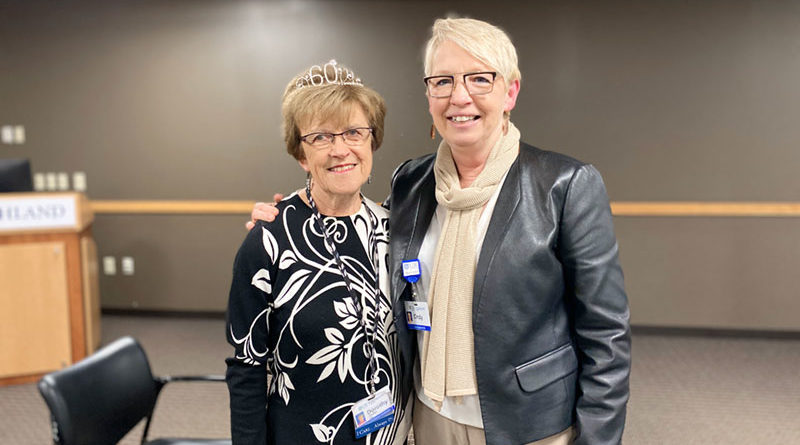 “I look forward to being able to come in and help the patients and families through the maze of the healthcare system,” the 80-year-old says.

On Jan. 14, the patient relations coordinator marked her 60th year with Highland Hospital, part of University of Rochester Medical Center. Over 100 people headed to the hospital’s Collins Auditorium on that day to celebrate the event with her. Cindy Becker, Highland’s chief operating officer, was among them, and spoke to 55-PLUS sometime afterward.

“Dottie’s dedication, compassion, and focus on our patients is remarkable,” Becker said. “Highland is grateful for her 60 years of service and the positive impact she has on countless patients and their families.”

All this might never have happened, if not for an injury.

Haelen was born at Highland, and grew up in Scottsville. Back then, some women who were seeking the rewards of a career turned to two fields which were thought to be appropriate for them: teaching and nursing.

As an adolescent, Haelen considered those occupational paths. Then, a bad cut to her arm sent her to Highland’s emergency department, where she had a chance to see how the department functioned.

“I was just so impressed with how the nurses and the physicians worked,” Haelen says. “I thought ‘Gee, this is interesting. I sort of like this.’”

“She said ‘If you like, go into nursing, because you can always teach nursing,’” Haelen explains. “On that advice, I went into nursing. I’m so glad I did.”

Upon graduating from high school, Haelen entered the Highland Hospital School of Nursing for three years of intensive classroom instruction and hands-on training with patients.

“Most our education was done here, at the Highland campus,” she says. “Some of our specialty areas, we had to go off to other hospitals for that piece of our education. Pediatrics we did at Strong. Psychiatric we did at the Rochester Psychiatric Center.”

Back then, nursing students stayed in a dormitory that was attached to the hospital, and had to adhere to strict rules while living there. After Haelen graduated, she experienced a change of role that she found thrilling — and a little scary.

After working as a staff nurse, head nurse, nursing supervisor and in other positions for Highland, Haelen took her current job. Each position that she’s held has given her the chance to observe the important changes that the field of nursing has undergone. For one thing, nurses relate to patients a bit differently than they did when she first donned her white uniform.

“We interact with patients differently, because we ask them for their feedback. How are we doing? Can we do it better?” Haelen explains.

The roles that nurses play in patient care have also changed.

“It’s more of a partnership of the patient and the medical care providers, including the doctors and nurses,” Haelen says.

In addition, new medical technologies have made their way into medical treatment. Laptops and portable computer terminals allow nurses and other medical professionals to access patient’s medical records right in treatment rooms, digitally note the treatments they’ve given those patients, and perform other tasks important to medical care.

“It’s more efficient and safer to do this stuff at the bedside,” Haelen asserts.

Finally, Haelen has watched the field of nursing expand to include positions and careers that didn’t exist when she began treating patients.

“I have watched RNs become nurse practitioners and become Ph.D.s in nursing,” she says. “I think it’s wonderful.”

Though she now works only three days a week, Haelen has no immediate plans to retire.

“I remember saying to somebody not long ago ‘How can I retire, because things keep getting so interesting here?’” she says.

In recognition of the achievements of its longest-tenured employee, Highland created the Dorothy Haelen Lifetime Achievement Award, one of the highest honors that the hospital bestows on its nurses. The award is given to individuals who consistently support the department of nursing’s efforts to improve practice, and achieve goals that reflect patient care excellence.